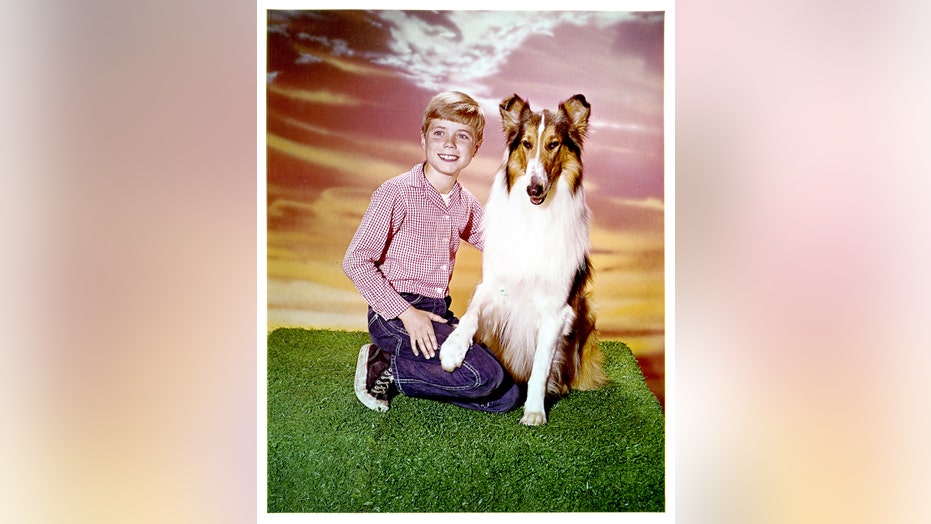 Jon Provost had his big acting break at 2-years-old and would go on to work with some of Hollywood’s biggest stars — including TV’s most famous canine.

The now-69-year-old, who has worked alongside Grace Kelly, Clint Eastwood, Kurt Russell and Robert Redford – just to name a few – is best known for starring as Timmy in the beloved TV series "Lassie" from 1957-1964. And despite the fame he achieved, Provost not only managed to escape the dreaded child star curse, but he continues to happily engage with fans of the beloved show. According to his website, “Lassie” continues to air in more than 50 countries and Provost still receive letters and emails from fans of all ages.

Provost spoke to Fox News about how he was discovered in Hollywood, nabbing his iconic role and the legend behind Timmy being stuck in a well.

Fox News: How were you discovered in Hollywood?
Jon Provost: I was not quite 3 years old and the way that all came about is just a fluke. For starters, my parents are not Hollywood people. My father is from Alabama and my mother is from Texas. He was an aeronautical engineer and she was a seamstress. We were living in Pasadena, Calif. at the time. My mom read in The Los Angeles Times that Warner Bros. was looking for a blonde boy 2-3 years old to be in this movie starring Jane Wyman, her idol.

Jon Provost on the set of "So Big." — Courtesy of Jon Provost

My mother thought that if she took me on this audition she was going to meet and get Jane Wyman’s autograph. That was the sole reason she took me. It happened there were 200 little boys and little girls who their moms cut their hair short trying out for this part. I ended up getting the job. I didn’t have an agent. I got one and that led to more movies like “The Country Girl” with Bing Crosby and Grace Kelly. I did about 12 movies before I started “Lassie.”

Fox News: What was the audition process like for “Lassie”?
Provost: Tommy Rettig did it for three years prior. He basically outgrew the part and wanted out of the series. The producer’s wife of “Lassie” was having lunch with the producer’s wife of a movie called “Escapade in Japan” that I was filming for RKO. It was the first American movie filmed in Japan after the war. I spent three and a half months there.

When I got back from Japan, I met with some of the producers and a couple of the writers from “Lassie.” They said, “You’re perfect.” But they still didn’t know how I would get along with Lassie. You just can’t fake that relationship. Fortunately, I grew up with farm animals and dogs so I stayed with Rudd Weatherwax, the owner of Lassie, for 2-3 days on his property to see how I would get along with the dog.

Fox News: It sounded like there were no problems after meeting Lassie.
Provost: Not at all. I did the show for seven years, 249 half-hour episodes. I worked with three different Lassies. The last dog I worked with, I worked with him for five years alone. We always had one Lassie on set. That dog, I loved that dog and he loved me. We grew up together. For five years, we saw each other five days a week and sometimes on weekends. Sometimes I would go to Rudd’s ranch on the weekends just to get out of LA. The actors made more mistakes than the dog. They were more of a problem *laughs*.

Fox News: What are some fun facts about “Lassie” that would surprise fans today?
Provost: Lassie is a female dog. Always has been. But every Lassie since the original movie in 1943 with Elizabeth Taylor and Roddy McDowell, all Lassies have been males. It’s good that the males always had long hair so you couldn’t tell if it was a male or female. And in every year in Lassie, we would have one episode where Lassie would have a litter of puppies. So everybody always believed Lassie was a female. But nope, all of our dogs were male.

People always asked about the farm we lived in. The barn, the house, and the yard were all on a sound stage. We filmed at Desilu Studios. We filmed 50 percent in the sound stage and 50 percent on location. Most of the location shooting occurred in the San Fernando Valley before it was shopping malls. In the opening of “The Andy Griffith Show,” Andy and Opie are walking by this lake. We used that lake. Almost everybody did back then when they needed a small lake. That lake is just below Mulholland Drive about a five-minute drive to downtown Beverly Hills. It still does look like you’re somewhere in a forest 100 miles away.

Lassie also had a stand-in for things like swimming across the lake. It would have taken two days to dry the dog out *laughs*. They couldn’t use the main dog for the day.

Fox News: Did Timmy ever fall down a well?
Provost: It’s crazy — we do not know where that phrase came from. It has been used by everybody for years. Johnny Carson, Jay Leno, Colbert — it never happened. And when I wrote my autobiography "Timmy's in the Well," I read the synopsis of every episode. There was never an episode where I fell in a well. There was somebody who did and Lassie had to go get help. But it never happened to Timmy. We just don’t know where that came from.

Jon Provost and Lassie in publicity portrait for the television series "Lassie," 1954. (Photo by CBS/Getty Images)

Fox News: What caused the show to end?
Provost: I had a seven-year contract with the studio. When the seven years were up, the option was ours to go forward. I was 14 at the time and the producers wanted to go for three more years. That would put me until the age of 17. I said no way. I just didn’t want to do it. And they offered a lot of perks for me to stay on the show. But my parents were really great and said, “Do what you really want to do.” I wanted to act, but I didn’t want to play Timmy anymore. I just got tired. I wanted a break. And I just thought it was a good thing for me to do. My parents left the decision up to me. So I left “Lassie” in 1968.

Fox News: After “Lassie,” you filmed “This Property Is Condemned” with Natalie Wood. What was that like?
Provost: I was almost 15 years old and I’ll tell ya, Natalie Wood was probably the most beautiful woman I’ve ever seen. She was great.

Fox News: How did you escape the so-called child star curse?
Provost: My parents let me pretty much do what I wanted to do. I didn’t have to take a job. And I knew a lot of kids whose parents made them. When they got a series, their parents quit their jobs and were living off the children, unfortunately. And my father was designing airplanes. He could have cared less about TV. I was lucky. When I left Hollywood, I thought it was good that I did.

Fox News: You’re currently developing a reality show called “Friends for Dinner.” What can fans expect?
Provost: The series will feature friends that I grew up with in Hollywood. The timing that we grew up in was such an exciting time for television and early Hollywood. We have a lot of stories, but we never told them to one another. So we would invite some friends over. I like to cook. I’m kind of an amateur chef. So that would be part of it. It would be a chance for people to listen in and hear these stories. We wanted to do something a little different. Tony Dow, Jay North… It’s an idea in the works.

Fox News: What is life like for you today?
Provost: I ultimately left Southern California and moved up to Northern California for college, which is where I live now. Life is good. I’m still involved in the business. I do some voice-over work. It just goes on. And people from all over the world are still watching “Lassie.” I still get fan mail from all over the world and they’re really, really nice letters from people saying, "I didn’t have a childhood but I grew up with you and I escaped." No one has ever said, "God, I hated that show." It’s always been positive and it’s a great feeling.