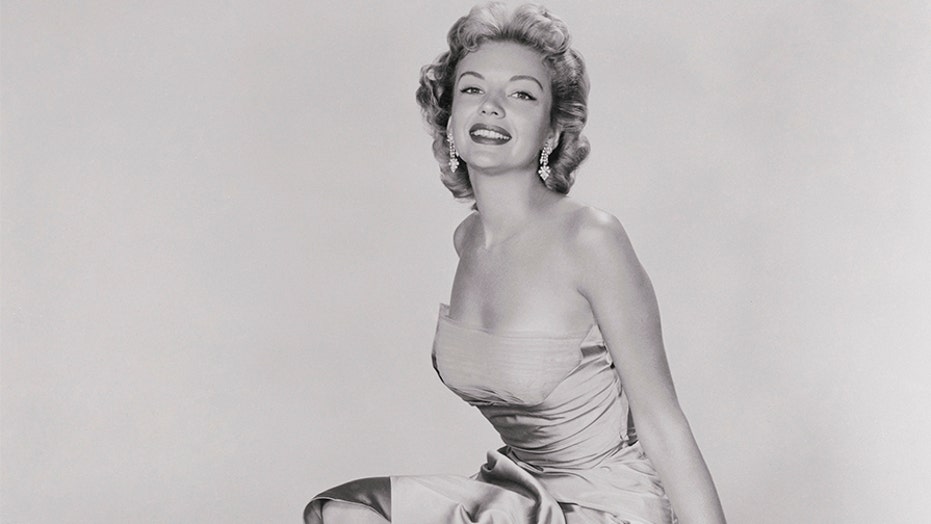 Kathleen Hughes, who said she was an ugly duckling while growing up, couldn’t have predicted she would later become a Hollywood blonde bombshell.

The now-90-year-old actress is best known for starring as June in 1953’s sci-fi cult classic “It Came from Outer Space,” but she has also worked alongside Frank Sinatra, witnessed a young Marilyn Monroe become a star and married the great love of her life along the way.

'THE WALTONS' STAR TELLS ALL

Most recently, Hughes attended The Hollywood Museum to commemorate the life of Ida Lupino, her former co-star in 1948’s “Road House.”

Hughes spoke to Fox News about being discovered, becoming a sought-after screen siren and what life is like for her today.

Fox News: How did you feel about being recognized as a blonde bombshell in Hollywood?
Kathleen Hughes: I loved it because I was an ugly duckling. When I was a little girl, my mother used to read to me all these lovely fairy stories about an ugly duckling. I just thought, "Oh, if only I could grow up to be a swan." I didn't like being an ugly duckling. I had buck teeth. I was very tall. I just felt ugly. I guess I did finally turn into a swan. It made me very, very happy because it was so unexpected.

Kathleen Hughes around the time she starred in "Dawn At Socorro."  — Getty

Fox News: How were you discovered?
Hughes: I always wanted to be an actress. I was in a play and studying acting while I was in college. A talent scout from Fox was in the audience to see this play. But as the curtain came down, I passed out. I think it was because I had spent most of the play standing in one spot. For some reason, I just collapsed on the floor. After I woke up, I met the talent scout. He said, "I think you should be under contract to 20th Century Fox." I said, "Oh, that would be wonderful! I would love that." By coincidence, my uncle F. Hugh Herbert was under contract to 20th Century Fox. When I told him that this talent scout thought I should be under contract, he said, "Wonderful — let's do your screen test."

There were all kinds of screen tests. Some were interviews where you would just be sitting in a chair and they would ask you questions. It was pretty boring. But my uncle was very, very creative. He made a test that consisted of me sitting at a dressing table as he asked questions.

While we talked, I kept staring at this thing on the dressing table, this picture. I would pick it up, I would look at it adoringly, blow kisses to it and put it back on the table. Finally, he said, "Enough of this! I need to see what you’re looking at." So I picked this thing up, turned it to the camera, and it was a picture of [studio executive] Darryl Zanuck *laughs*. Needless to say, I got a contract instantly! A seven-year contract at Fox. It only lasted three years, but that was still pretty good. Then I went on from Fox to Universal.

Fox News: How did you get the role of June in “It Came from Outer Space”?
Hughes: Well, I was under contract at the studio. When you’re under contract, they just put you in one film after another. They just decided that was a good part for me *laughs*. And it was fine by me. I certainly enjoyed it.

Fox News: Where did the idea for that famous scared pose come from?
Hughes: The one where I have my hands up in the air and I’m screaming? I had just finished working on that film. I went to the still gallery and as I walked in, the cameraman who was taking stills said to me, "Put your hands up in the air and scream." And I did *laughs*. It was an instant success. They loved it and the film just lives forever with that photo.

Kathleen Hughes screaming in a promotional portrait for in 'It Came From Outer Space', directed by Jack Arnold in 1953. (Photo by Silver Screen Collection/Getty Images)

Fox News: How surprised are you that the film has become a cult classic?
Hughes: I never really thought about that. I’m just happy that it is!

Fox News: It’s been said you're most proud of your 1956 film “Three Bad Sisters”. Why?
Hughes: I just loved the scene where I horsewhipped my sister and sent her sobbing and bleeding into the night where she got into a car and drove off a cliff. For some reason, it just struck me that it’s very funny. I don’t know why. But it was fun to do a part like that where you’re whipping somebody. It’s something where I could never manage myself doing. Actually, I was whipping a pillow. *laughs*. It was fun and I liked everybody who was in the film. I loved everything about it.

Frank Sinatra at the Sands Hotel and Casino, Las Vegas, in 1965. (Photo by John Dominis/Time

Fox News: How was it working alongside Frank Sinatra?
Hughes: That was the thrill of my life. I was probably the biggest Sinatra fan that ever lived. I just worshipped the ground he walked on. I still love his songs and play them today. He had a weekly show at CBS. I would get called for jobs all the time. So I went. I was in a sketch with Sinatra. I think I was playing a sexy nurse in a psychiatrist office… I hate to say this, but I think he didn’t like me at all. He was icy cold towards me. Just icy cold. I don’t know why. It was disappointing. But I have a still of me with Sinatra and we look like a very, very happy couple *laughs*. I enjoy looking at that still. I’m just so thrilled I had the opportunity to not only meet him but to be photographed with him.

Fox News: What was your impression of Marilyn Monroe?
Hughes: My cousin Diana Herbert was taking acting lessons when I was already under contract. She was in a show at the studio club. Every studio in those days had a studio club and it consisted of all the people behind the scenes – the mailroom people, the secretaries – everybody but the actors. They would put on a show every year. My cousin was going to be in one of these shows.

'LEAVE IT TO BEAVER' STAR TELLS ALL

The day before the show, she said, "They took my song number away from me and they gave it to a girl named Marilyn Monroe who had been under contract at the studio for six months — they had just dropped her! But now they’re giving her the song. I’m still in the show and you still have to come and see me." Well, I went to see it and Diana did her number. She was very, very good. But then Marilyn came on. Oh my God, she was fantastic. She did a song called "I Never Took a Lesson in My Life." She was wearing this slinky black dress. I just couldn’t believe they dropped her.

She was incredible. She was just a star. I just thought if anyone from the studio saw the show, they would realize they made a terrible mistake and sign her back again. A short time later, the casting office called me and they said, "Can you dance?" They got me with this poor, patient man of a dance director. He tried hour after hour after hour to teach me one simple step. Years later I was able to pick it up, but I could not learn this step at the time. At the end of the day, as it was getting dark, he said, "Forget it! We’ll get someone else." That someone else was Marilyn.

Fox News: What was the secret behind your lasting marriage to screenwriter Stanley Rubin?
Hughes: We were just good for each other. And I was determined not to get married until I found someone I would be happy to live with forever. So I made every effort to be a good wife. It was a very, very happy marriage.

Fox News: How did it feel to honor Ida Lupino at The Hollywood Museum?
Hughes: Absolutely wonderful. I always thought she was absolutely fabulous and fantastic. I just loved every minute of being with her in a film.

Fox News: What’s one memory of Ida that still sticks out to you today?
Hughes: I remember watching the director film a scene. But he wanted her out of the scene even though she was written in. He said to her, "You need to leave the scene so I can focus." She said, "Where am I going?" He said, "I don’t care! I don’t care where you’re going. You’re going to the bathroom. Just get out of the scene." And she took it so well! I thought that was just amazing. She found a way to walk out of the scene and that scene went on without her. I really admired her for that.

Kathleen Hughes arrives at the Los Angeles premiere of "Footprints" at Grauman's Chinese Theatre on April 13, 2011, in Hollywood, Calif.  (Photo by Amanda Edwards/FilmMagic)

Fox News: What is life like for you today?
Hughes: A little bit boring *laughs*. Life was a lot more fun when my husband was alive and when I was working a lot. But I’m still active. I have a personal trainer… I have lots of movie screenings at my house and I’m invited to lots of screenings as well. I love movies. I would be happy to see a movie every day.