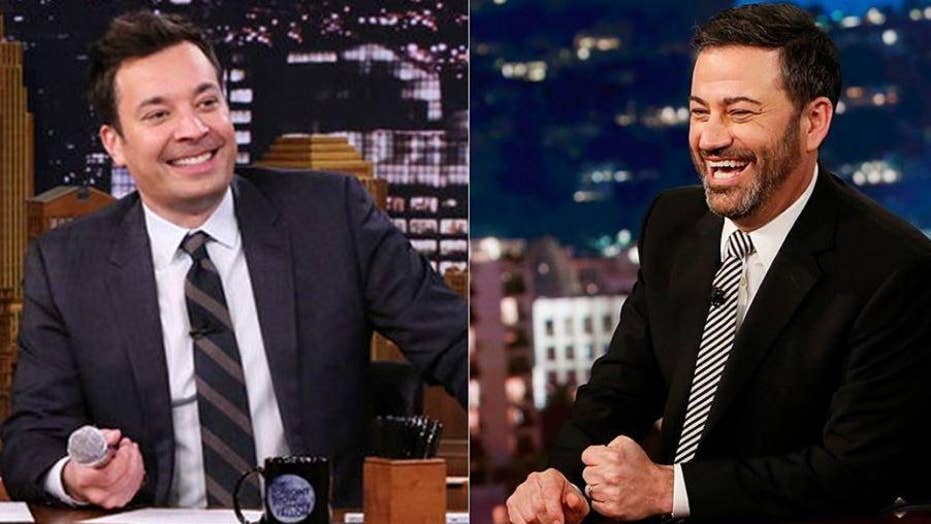 On Friday, Northam’s yearbook page from the East Virginia Medical school in 1984 went viral because it included an image of someone in blackface and another in a KKK robe. After apologizing and taking responsibility that night, Northam changed course the following morning, claiming he wasn’t either of the two people in the photo. He did, however, admit to wearing blackface when entering a dance competition as Michael Jackson that same year.

While Northam’s racist yearbook page and bizarre press conference led national news and were mocked by several late-night hosts, they were left unmentioned by Jimmy Kimmel and Jimmy Fallon, both of whom have worn blackface on comedy skits.

Fallon also appeared in blackface during his days on “Saturday Night Live,” impersonating Chris Rock in a sketch. (The sketch was not available on the "SNL" site but some snippets have been used in various related parody sketches like the one below.)

Both Kimmel and Fallon focused much of their monologues on Sunday’s lackluster Super Bowl and squeezed in mockery of President Donald Trump.

The other comedians, however, had lots of fun at Northam’s expense.

“Daily Show” host Trevor Noah referred to the Democratic governor as a “legend” for knowing for certain he didn’t do blackface in the photo because he did blackface another time. He also called Northam a “blackface connoisseur” for his expertise regarding how difficult it is to remove shoe polish off your face.

“I can’t believe this guy was about to do the moonwalk in the middle of his blackface apology,” Noah reacted. “That is the wrong time for dance moves!” (The Associated Press)

“Late Show” host Stephen Colbert hit the Virginia politician for saying he “finally had a chance” to sit down and look at the photo from the yearbook.

“I’m guessing that wearing blackface is one of those things you would remember doing, like skydiving or your first time,” Colbert told his audience.

“You hold onto that good woman," Colbert said of Northram. "Between the two of you, you’ve got one brain.” (AP)

“Late Night” host Seth Meyers poked fun at Northam for not identifying whether he was the one in blackface or in the KKK hood, calling it a “real lose-lose.”

“That’s like being asked whether you’re Erik or Lyle Menendez,” Meyers quipped. “I’m not a professor of political science, but it’s not good when you have to specify whether you’re the one in blackface or the one in the KKK robe. There’s no good option here. Even the curtain in the background of that photo had to hold a press conference to apologize.”

All three of them slammed the governor for almost doing the moonwalk at his press conference, which was prevented by his wife. Meyers declared the exchange as “one of the more cringe-worthy moments in recent political history.”

“Late Night” host Seth Meyers poked fun at Northam for not identifying whether he was the one in blackface or in the KKK hood, calling it a “real lose-lose.” (Getty Images)

“I can’t believe this guy was about to do the moonwalk in the middle of his blackface apology,” Noah reacted. “That is the wrong time for dance moves!”

“Look at his face! He actually thought about doing it! That is a face looking to see if he has room to moonwalk,” Meyers exclaimed. “I can’t believe anyone has to say this, but you can’t moonwalk your way out of this one.”

Colbert had a simple message for Northam.

“You hold onto that good woman," Colbert said. "Between the two of you, you’ve got one brain.”