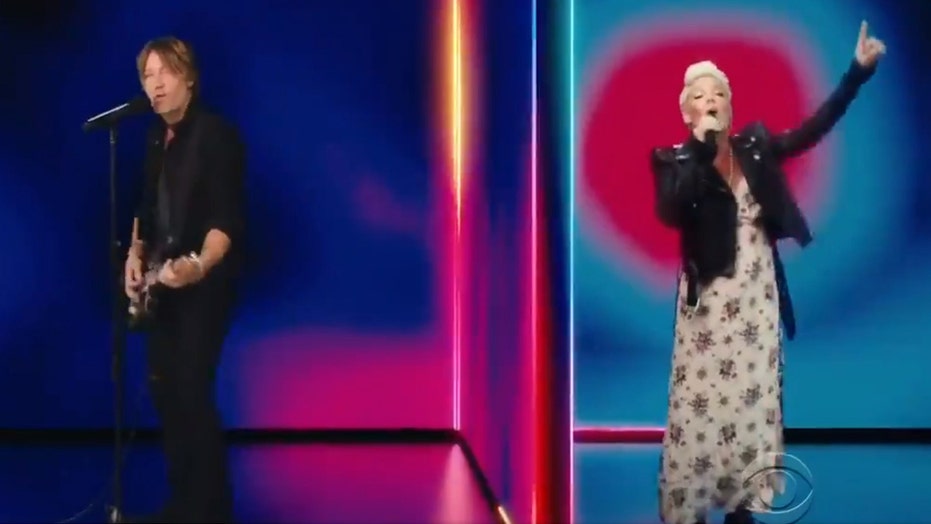 Keith Urban and Pink set the 2020 Academy of Country Music Awards stage ablaze when the two collaborated for one of many performances by country music’s standouts Wednesday evening.

Urban, 52, who adopted master of ceremony duties for the 55th annual affair, and the “Beautiful Trauma” songstress, 41, joined forces in a big way for their showing of “One Too Many,” which they premiered at the show.

The virtual performance in front of green screen backgrounds drew praise from many on social media who felt the song married their voices perfectly.

“Great song!! Those two together just blend so good!!” tweeted one fan.

While another echoed the sentiment, writing, “Just as you are able to do with a multitude of instruments Keith, you achieve incomparable magical harmonies! Pink, I've been an admirer of you both for years&as you have grown&musically evolved filling lyrics with the truth of your souls.”

NICOLE KIDMAN, KEITH URBAN CUDDLE UP IN LOVING NEW PHOTO: 'TWO #TUMBLEWEEDS ARE BETTER THAN ONE'

Keith Urban, left, and Pink premiered 'One Too Many' at the 2020 ACM Awards on Wednesday in Nashville, Tenn. (CBS)

Urban used his pull as this year’s host to debut “One Too Many,” which will appear on his upcoming album, “The Speed of Now, Part 1.”

Meanwhile, Pink continued her presence of turning out for country shindigs as a pop performer as she previously collaborated with Kenny Chesney on his 2016 song "Setting the World on Fire" and Chris Stapleton also joined her on "Love Me Anyway" on her 2019 album “Hurts 2 B Human.”