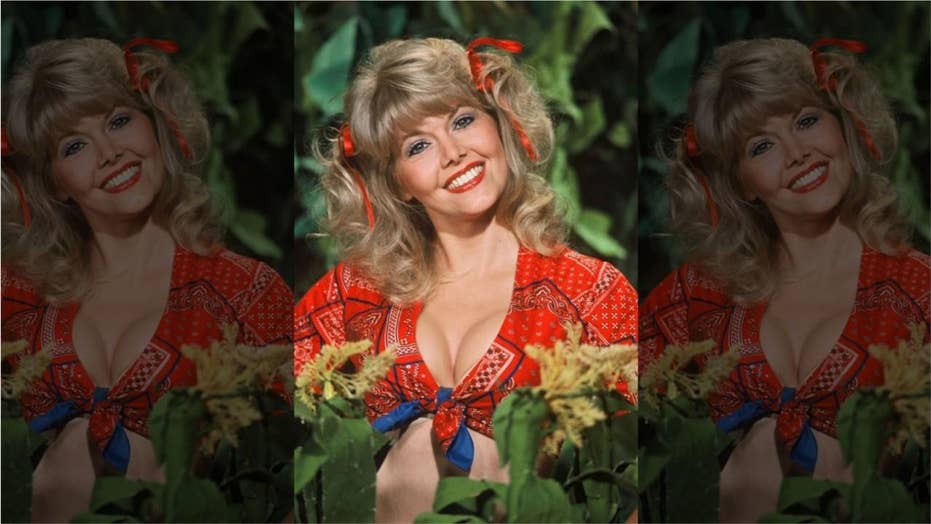 The 68-year-old actress, who starred in the country-themed comedy and music show “Hee Haw” from 1972 until 1991, is joining her former castmates Jana Jae, Lulu Roman and Buck Trent for the “Kornfield Friends” tour to celebrate the show’s 50th anniversary. The perky blonde with the syrupy sweet personality is not only eager to meet longtime fans of the show, but also share some secrets from the set.

Rowe spoke to Fox News about her time on “Hee Haw,” “Happy Days,” as well as stripping down for Playboy.

Fox News: Looking back, what was the audition process like for "Hee Haw"?
Misty Rowe: I first learned about "Hee Haw" through my father. It was his favorite show. My mother could not stand it. She would just roll her eyes when it was on. I had auditioned in California and they flew me to Nashville. They had me behind Buck Owens and Roy Clark while I clapped my hands. And six hours later, I was still clapping my hands. As I’m smiling for the camera and clapping my hands, I’m thinking, "Boy, this show won’t last six months." I was on it for 19 years!

Fox News: We hear you had an accident involving Archie Campbell. What happened?
Rowe: Minnie Pearl had a schoolhouse skit and they hired actual children to play the students. But the producer then said the kids weren’t funny. So they got adults to play the kids. Archie Campbell was behind me dressed as a kid smoking a cigar. Now why a child would be smoking a cigar, I don’t know. But that was his trademark, I guess. Then he said, "Misty, what is two and two?" So I stand up to give the answer. And as I stood up, Archie leans over and he pinches me on the behind! I screamed because no one had ever done that to me before. I turned around and my reaction was just to slap him. I hit the back of his neck and what I did not know is Archie wore a toupee.

He would only tape it in front. He didn’t want to waste money taping the back. So when I hit him on the back of the neck, as my hand came up, the back of the toupee went up in the air, went over his head and was hanging in front of his face. He was smoking that lit cigar and then the toupee caught on fire. I was just screaming because I didn’t know what I had done. Everybody was laughing their heads off. Archie took his toupee and put it back on his head. The assistant director ran over with a fire extinguisher. Archie said, "If it had been anybody but her, I would have been mad." I was so worried he was mad at me. But [producer] Sam [Lovullo] said, "Misty that just added three years to your contract."

Fox News: How was it appearing on "Happy Days"?
Rowe: I was Wendy the carhop on "Happy Days." I loved it. I truly, truly did. And I have seen Ron Howard and Henry Winkler since. Both are such great guys.

Rowe was Wendy the carhop on "Happy Days," pictured here in a Season 2 episode with Ron Howard (Richie), Anson Williams (Potsie) and Donny Most (Ralph). (Getty)

Fox News: What was that audition process like?
Rowe: "American Graffiti" had just come out and it was a big hit. I was then called in for "Happy Days." I read for the producer and he said, "Come with me." And he put me in one of these sort of golf carts that go around Paramount Studios. He took me over to the wardrobe department. He said "Go in there and get dressed." I said "Now?!" And he responded, "Yeah, you’re on in an hour!" They had to replace someone so fast that I auditioned for it and started working that day. But they were very kind to me. And it was so exciting.

Fox News: Were you ever worried about being typecast over the years?
Rowe: In the ‘70s, it was a Disneyland for blondes. You had Farrah Fawcett and Goldie Hawn — everybody wanted a Goldie Hawn or a Farrah Fawcett. And then I'd say by the mid-‘80s, it was overdone. Everyone had become a blonde. It sort of evened out. At that time, I got married. My first husband became a big soap opera star. We had a little baby, my daughter. We bought a big ole house in the country and then he left. I was Hee Haw Honey alone in Connecticut.

I didn’t know anybody. I had never lived in New England and I had this new baby. My mom came to live with me to help me. That’s when I auditioned for "Love Always, Patsy Cline." … And honestly, it’s been a blessing — to have a TV career for so long and then be onstage for another 20 and become a professional director.  And my life has been enriched with the people I’ve worked with, the people I’ve met.

Fox News: You posed for Playboy in 1976. What was that like?
Rowe: Barbi Benton was on "Hee Haw." We quickly became friends. We were the only two unmarried girls at the time on "Hee Haw." Barbi said, "I think you should be on Playboy." I said, "Oh no, no. I’m an actress, I can’t do that." She said, "Well, I did it!" I then said, "But your boyfriend is Hugh Hefner! I just don’t think I can do that." I had done "Hee Haw." I had done "Happy Days." I became the first actress to ever play Marilyn Monroe in a movie. And then Barbi said, "Hef thinks you’ve done too much now to be a Playmate, but he’ll give you a pictorial." Quite frankly, I just didn’t know how to get out of this.

My agent asked for twice as much as the Playmates got, for pre-approval of pictures and a female photographer. It was also going to be shot in my home. And that’s how I did it! But it was very modest. I was so shy. They had a lighting guy come in and set up all the lights. I was in a robe. And the female photographer would have the lighting guy go out on the front porch while she shot me. But it was the ‘70s! And the ‘70s were very different from now. And the issue I was in is very famous. It was the Jimmy Carter issue. He was running for president and he was the Playboy interview. I never bring it up, but you asked! I don’t deny it, but it was a long time ago. I still wish I had that waist!

Fox News: How does it feel for the "Hee Haw" gang to get back together?
Rowe: From time to time, we still get together. We’re sort of half in and out of each other’s lives. For instance, I live in South Carolina. And when we had to evacuate because of a hurricane, we drove over to Maryann’s [Gordan] house in Georgia and we stayed there. So we are still very close and we do stay in touch. But just the thought of being able to be onstage again with the people I love — I love it.

"Hee Haw" [1969-1997] was the longest-running country variety show in the history of television. But we never got to meet many people that watched it. So now when we do our shows, we get to meet those folks. They talk to us and it’s such a great time. … And those people, they did not forget. As an entertainer, to have people still interested in what we do and still love it — it’s such a happy thing.

Fox News: Who came up with the idea of a "Hee Haw" reunion?
Rowe: It all started at Sam Lovullo’s memorial. Sam was our great producer over at "Hee Haw." We all called him papa Sam because "Hee Haw" was like our second family. … When he died, there was a big memorial in Nashville. Jana Jae sat at the table with me and afterwards we went to have dinner together. There was a band at the restaurant we were at. I said, "Jana, they need a fiddle!" And she said, "They sure do, Misty. I got one in the car."

She ran out and got her famous blue fiddle out of the trunk. She said, "I will play and when I do, I want you to start dancing and clapping." I said, "OK, let’s do it!" We did it and it brought down the house. The next thing I knew… we got some of our friends together for other appearances and it was so much fun.  We just wanted to continue it. And I cannot believe at this stage in my life I’m having so much fun.