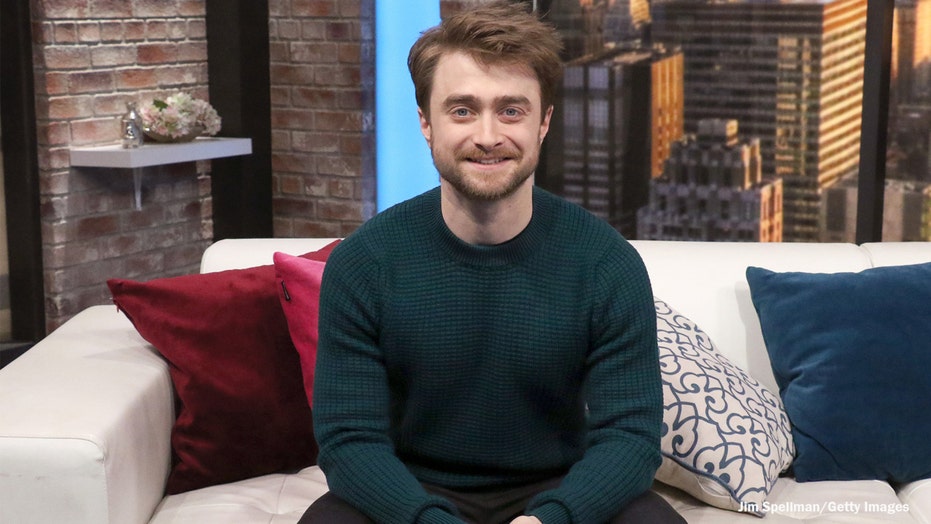 Former 'Harry Potter' star Daniel Radcliffe explains why he would be open to doing a punk biopic, dishes on his new film 'Escape from Pretoria.'

Daniel Radcliffe is busting out of his latest film role.

The 30-year-old, best known for playing the most famous “half-blood wizard" in the “Harry Potter” film series, is starring in “Escape from Pretoria,” which tells the true story of political prisoners Tim Jenkin and Stephen Lee (Daniel Webber). The two white South Africans, along with other prisoners, hatched a plot to break out of Pretoria Central Prison in 1979 during the apartheid era.

The British star has been keeping busy since “Harry Potter and the Deathly Hallows: Part 2” premiered in 2011, appearing on television, film and even theater. That same year, Radcliffe starred in the 10-month sell-out run of the Broadway musical “How to Succeed in Business Without Really Trying.” And these days, Radcliffe is eager to take on a new challenge – even if it means going punk.

Radcliffe spoke to Fox News about the music biopic he would be willing to do, what his relationship with the “Harry Potter” cast is really like today and how he managed to impress the real Jenkin.

Fox News: According to a previous interview, you would be open to doing a music biopic. If you were to play any artist, who would it be and why?
Daniel Radcliffe: I don't know. That's the thing, if you're talking like dream thing, who would it be fun to play and which songs it would be great to sing, then I suppose it'd be David Bowie. But I'm not actually submitting myself for that. I don't think I'd be good, and I certainly think there are people that'd be better. And also, we don't need to make a film about everyone's life.

But yeah, maybe I could be in a film... That's the thing because if it was a musician that I loved as well, there would also be this sort of twin pressure of I don't want to screw up a movie about my favorite musician. So yeah, it's a really good question. I should give some more thought to that. But yeah, maybe something punk or something from the '70s that would require less singing ability on my part. That might be good.

Former 'Harry Potter' star Daniel Radcliffe says he would be open to doing a music biopic. (Photo by Suzi Pratt/Getty Images for Turner)

Fox News: What’s one memory from your time bringing the "Harry Potter" films to life that makes you smile today or has been vivid on your mind lately?
Radcliffe: Just all the people I got to meet and work with. In this film, on "Pretoria," I had the lovely experience of working with Ian Hart again, who was somebody who I worked with on the very first "Potter" film with and whom I haven't worked with since. So to be working with somebody when you're 10 and then work with them again when you're 30 is really cool.

And I'm having that sort of experience more and more, where I'm working with people that I've worked with when I was really young and it's this really lovely full-circle thing that keeps happening now. But yeah, the memories of "Potter" are just too numerous to count.

The stuff that really sticks out in my head is a lot of the stunt stuff, a lot of the cool stunts I got to do, and just a lot of just, I don't know, the downtime hanging out on set with all my friends and the crew or in many cases some of the greatest actors of their generation — just chilling and talking about nonsense was incredibly fun.

Fox News: How would you describe your friendship with your "Harry Potter" castmates today?
Radcliffe: Honestly I think that this is never the answer that people want to hear, but the people that I am actually closest to that I met on Potter are all crew members.

My stunt double, David Holmes, and people from the AD department, makeup and hair, costume, particularly, I feel like those are the people that I have stayed and remained bonded with very closely. I think the rest of us are all sort of quite busy now and often in various cities and parts of the world.

But yeah, I think there is definitely, going through something as mega and weird as that at a young age together, I think means that we all have some common experience that we'll probably never share with anyone else. So I think that will bond us forever. But we're not living in each other's pockets sort of as much as people might want to hear. So I'm sorry if that answer disappoints anyone.

Actor Daniel Radcliffe poses during a ceremony honoring him with a star on the Hollywood Walk of Fame in Hollywood, California November 12, 2015. (Reuters)

Fox News: You’re also active in the theater world. When do you feel most like yourself, on stage or in front of a camera?
Radcliffe: I wouldn't say necessarily in front of a camera, but definitely on a film set is one of the times I feel most myself, just because they've been part of my life for so long and I love them. I love being on them. There are very few things that will happen on a film set that will phase me I guess.

I've been lucky enough to have a wide variety of experiences, when it goes well and when it goes very badly. So yeah, I love being on set. That's why I want to direct as well because I just love being in the middle of the film sets. I think they're really exciting, fun places to work. So yeah, I'm addicted to being on set, I think.

Fox News: What was it about “Escape from Pretoria” that made you say yes to the role?
Radcliffe: I love a prison break story or any kind of prison escape movie or documentary or anything like that. I've always been fascinated and found them really exciting. So when I read this script, and it was something I'd never heard, I'd never heard of this story and it felt amazing to me that this wasn't one of the great prison break stories that everyone knows, along with all the Alcatraz sort of theories and all of that stuff.

So it was really first and foremost, it was the chance to be a part of telling this incredibly cool story about these guys who did something really audacious and amazing and crazy. And because they are in prison for incredibly honorable reasons – they are political prisoners who are fighting against apartheid – so you can really root for them escaping as well, you really want them to get out. So yeah, it was an amazing story to be able to tell.

Fox News: What was it like meeting the real Tim Jenkin?
Radcliffe: Tim's lovely and really, really kind and was very encouraging of all of us on set. And I think now that we've finished the film as well, he's really happy with it, which thank God. But yeah, when you become aware of we're actually just actors in costumes playing at your life and you actually lived this, it's a very strange feeling, but I think it does motivate you, or certainly me, it motivates you to work even harder and to sort of just invest more of your sort of blood, sweat and tears into doing justice to his story.

Fox News: What was the biggest challenge that you faced in making this film?
Radcliffe: I know this is a really, really boring answer to your question, but the biggest challenge we faced during making this was actually just the time, the time it took. Because on a lot of indie films, which this was, say you get to the end of the day and you're on your last scene and you've got no time left, you can go, "You know what, we'll just shoot it in two shots or something, or we'll do it all in one shot and it'll be fine."

Daniel Radcliffe knows he may never escape 'Harry Potter,' but says he embraces it. (AP)

Whereas with this film, there were really no scenes you can do that with. Every scene is comprised of so much small, detailed work and action that you kind of need a huge amount of time to get that call, and we just did not have that time.

So it was kind of a case of being sort of up against it constantly. But I really also liked that, I liked that feeling of being under pressure all the time or constantly there's a sense of urgency all the time. I find that really exciting and one of the reasons I like being on set. As annoying as it was for our director, who I'm sure would have loved more time, I really enjoyed the pace that we shot this at.