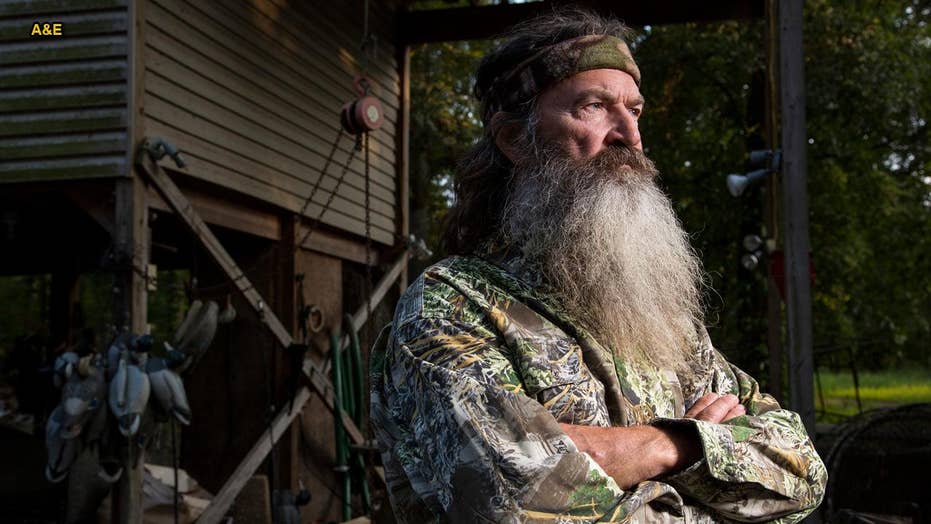 Duck Dynasty' star Phil Robertson explains how he found faith before fame, gets candid on his new book, titled 'The Theft of America's Soul.'

Before Phil Robertson found fame in the hit A&E series “Duck Dynasty,” he was a man in need of salvation.

The 72-year-old revealed he originally turned his life over to God in the mid-1970s after living recklessly in his native rural Louisiana. The professional hunter and reality TV star was previously a star athlete in football, baseball and track who eventually found himself hanging with the wrong crowd.

“Until I was 28 I didn’t have any faith,” Robertson told Fox News. “Here I am biblically speaking — God said I was under the control of the evil one. I didn’t know that. I was just getting high and drunk with the worst of them. … I had built a track record that was not a good one. I then realized, ‘What was I thinking? All that mischief and carrying on.’ … I came to know Jesus. I looked up one day and I said, ‘Man, I’m driven to do this. I have to do it.’”

Robertson recently published a book titled “The Theft of America’s Soul,” which he described as a “prophetic wake-up call” for Americans looking to find peace and unity in Christianity. But Robertson admitted he had to hit rock bottom before he accepted God as his personal savior. And when he was faced with temptation, Robertson insisted he had the strength to stay dedicated to his faith.

“At first I’m trying to be good,” he explained. “I’m learning how to be good. My friends would come by, my old buddies, and they would say, ‘Let’s go for a ride. Drive up the road.’ I said, ‘Nah.’ My faith was being tested. … I just broke away from them. … I will say I got an unlisted phone number and I hid out the first year while I was getting on my spiritual feet. That was 44 years ago. Well, the further I have gone on my walk of faith the more faithful I have become.”

LAUREN DUGGER THANKS FANS FOR PRAYERS

According to Robertson, he is invited every year to speak to hundreds of churches and organizations, explaining how his belief in God has made him a better family man over the years. He said his dedication to helping others in need is his true purpose in life.

“I’ve devoted my life to helping others,” said Robertson. [My wife and I] go to them. The rehabs. The prisons. The downtrodden. The ones that no one would give a hoot about. The homeless. … When we meet together we have food. We meet together on Sunday mornings. … People who sleep under bridges can come in. [And we] get them a good meal. … [It’s] all God’s children coming together.”

“God speaks through his people,” Robertson continued. “I’m just one of the millions that God’s using to speak. We’re saying, Love God, love your neighbor, love each other, don’t lie to each other, don’t steal from one another, don’t murder each other. … Be good. We’re trying to help our fellow man.”

Many audiences across the country first learned of Robertson, his spouse “Miss” Kay and their four sons on “Duck Dynasty,” which chronicled their duck-hunting business. Robertson, who was originally unhappy with the duck calls on the market, created one in 1972 that expertly mimicked a duck. In his first year, Robertson sold $8,000 worth of duck calls. He received a patent for the call that same year and then in 1973, formed the Duck Commander Company.

“Duck Dynasty” aired from 2012 until 2017. USA Today previously reported that while the show drew in more than 10 million viewers in 2013, ratings ultimately suffered from a major dip.

A controversy that took place when cameras weren’t rolling also impacted viewers. In December 2014, Robertson was suspended by A&E following his remarks about homosexuality during an interview with GQ, sparking outrage. Robertson later clarified his controversial comments in “Good Morning America.”

Despite the setbacks, Robertson said he credited his success, both in pop culture and personally, to God.

“I would say it is proof positive that there is a God and he divinely intervened in one family,” Robertson explained. “What are the odds? We’re down on the river bank. I’m fishing the river and I made a duck call that sounded like a duck. Thank God number one. Thank capitalism number two.

"We all ended up rich and famous. All of us. You’re like, ‘How in the world did you do that?’ I’ve never turned on a computer in my life. Never been on one. Never owned a cell phone, which proves you can become rich and famous without a computer or a cell phone. … I would think there’s a God somewhere or I was really lucky. I think it’s too much luck being involved in that. I’m leaning toward God blessed us.”

Robertson shared he wrote his latest book not just to raise awareness on his faith, but to express why he’s proud more than ever to be an American.

“Well, as much as vitriol and hatred there is running around in America, one thing about America is our founding fathers said, ‘Make sure you don’t let anyone mess with your freedom of speech,’” he said. “Can you imagine how much more difficult my job would be if I didn’t have the freedom of speech? … Thank God for our founding fathers. … I’m proud to be an American. I wrote the book so that I might help. Just help a little.”