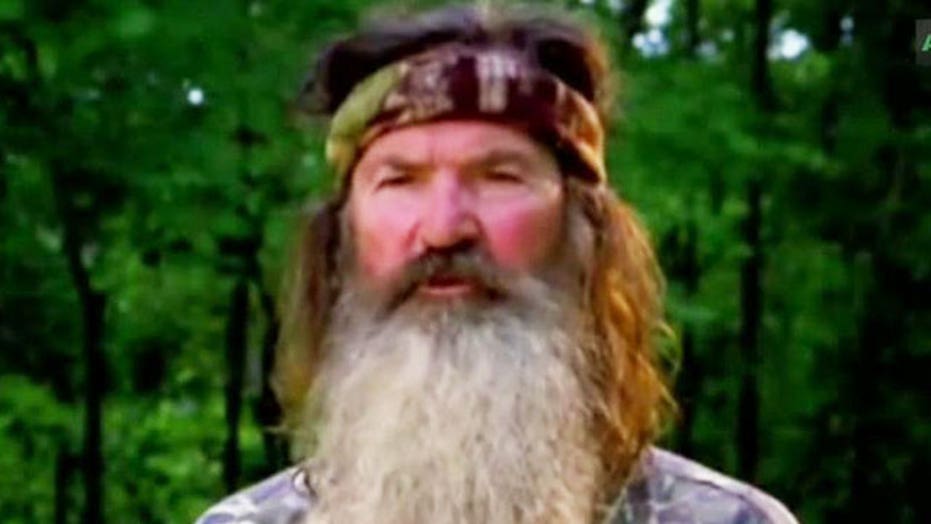 "We are extremely disappointed to have read Phil Robertson's comments in GQ, which are based on his own personal beliefs and are not reflected in the series 'Duck Dynasty'," the network said in a statement.

"His personal views in no way reflect those of A&E Networks, who have always been strong supporters and champions of the LGBT community. The network has placed Phil under hiatus from filming indefinitely."

Earlier Wednesday, Roberston had responded to critics who had slammed him for very graphic statements he made about his preference for heterosexual sex over homosexual sex.

“I myself am a product of the 60s; I centered my life around sex, drugs and rock and roll until I hit rock bottom and accepted Jesus as my Savior,” he said in a statement sent to FOX411.

“My mission today is to go forth and tell people about why I follow Christ and also what the bible teaches, and part of that teaching is that women and men are meant to be together.

"However, I would never treat anyone with disrespect just because they are different from me. We are all created by the Almighty and like Him, I love all of humanity. We would all be better off if we loved God and loved each other.”

We are all created by the Almighty and like Him, I love all of humanity

In a wide-ranging interview with GQ, Robertson didn’t hold back when sharing his thoughts about homosexuality and sinning.

Click here to read his entire interview in GQ.

Paraphrasing Corinthians he added: “Don’t be deceived. Neither the adulterers, the idolaters, the male prostitutes, the homosexual offenders, the greedy, the drunkards, the slanderers, the swindlers—they won’t inherit the kingdom of God. Don’t deceive yourself. It’s not right.”

The gay and lesbian rights group GLAAD was quick to criticize Robertson for his comments and called on A&E to take action.

"Phil and his family claim to be Christian, but Phil's lies about an entire community fly in the face of what true Christians believe," said GLAAD rep Wilson Cruz. "He clearly knows nothing about gay people or the majority of Louisianans – and Americans - who support legal recognition for loving and committed gay and lesbian couples. Phil's decision to push vile and extreme stereotypes is a stain on A&E and his sponsors who now need to reexamine their ties to someone with such public disdain for LGBT people and families."

Robertson also told GQ his family has lost its privacy since they were thrust into the limelight as the stars of the hit show, but it was well worth it because the series has given him a platform to spread his religious beliefs.

“For the sake of the Gospel, it was worth it… All you have to do is look at any society where there is no Jesus. I’ll give you four: Nazis, no Jesus. Look at their record. Uh, Shintos? They started this thing in Pearl Harbor. Any Jesus among them? None. Communists? None. Islamists? Zero. That’s 80 years of ideologies that have popped up where no Jesus was allowed among those four groups. Just look at the records as far as murder goes among those four groups.”

Still, he doesn’t expect his fame to last forever.

Though the network did not officially fire the Robertson patriarch, many fans are taking news of his suspension to mean his job as a reality star is done for good.