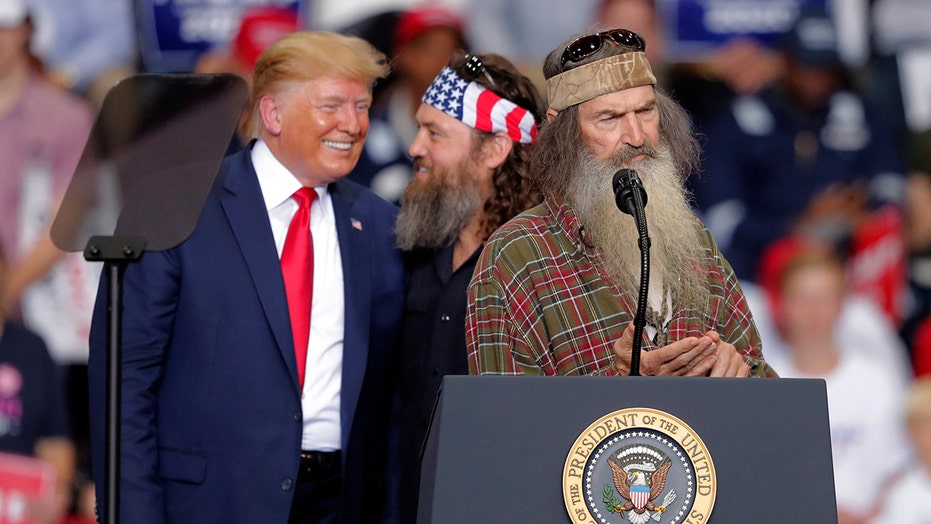 President Trump gave those in attendance at his Louisiana rally on Wednesday a thrill when he brought out the state’s very own stars of “Duck Dynasty,” Phil and Willie Robertson.

In the midst of his fiery speech, in which he touched upon his impeachment inquiry, Republican candidate for governor Eddie Rispone and Jane Fonda, Trump revealed that the two TV stars were in the house before bringing them up onstage.

“Smart as can be and wonderful people and they hit big, they hit big,” he said. “And you don’t hit big unless you have it. Come on up fellas!”

The duo shook hands with the president before each saying a few words into the microphone.

“I got it down to this,” Phil, who spoke first, said. “If you’re pro-God and pro-America and pro-gun and pro-duck hunting... That’s all I want!”

With that, Phil yielded the podium to his son, Willie.

“I don’t know what else to say after following Phil and the president and Eddie,” he said. “Thank you guys so much. You have been such a great community to share life with, to worship with and I’m so tickled to be here with the president, that he actually came down to our community."

“Let's go Eddie!” he concluded, to thunderous applause from the crowd.

Trump noted that he began watching “Duck Dynasty” after learning that he had the duo’s support in 2016.

“I started watching a little bit,” he told the crowd. “A lot of wisdom there.”

The rally took place in Monroe, La., Wednesday night. The president encouraged voters to support Rispone as he seeks to keep Democratic incumbent John Bel Edwards from winning a second term as governor.