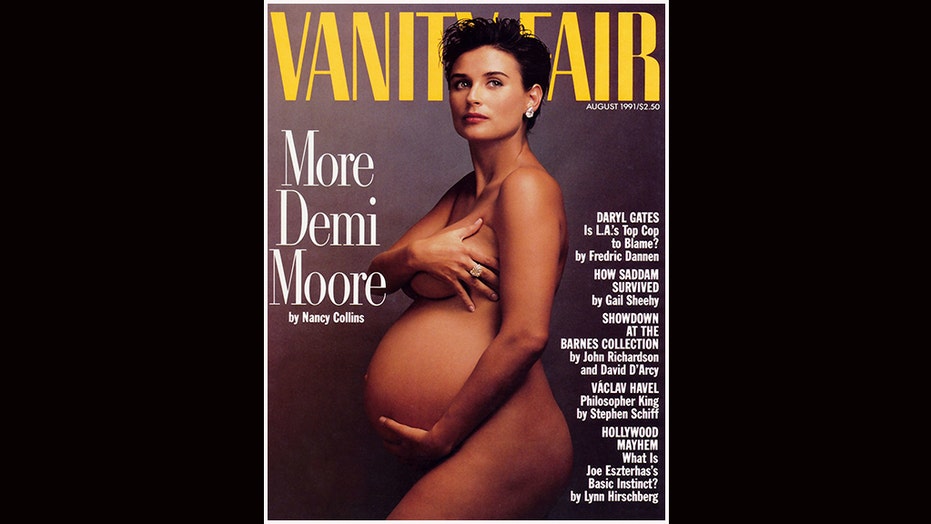 Demi Moore revealed that her iconic Vanity Fair cover, in which the actress is featured nude and pregnant, was supposed to be a private image.

The photo, shot by famed snapper Annie Leibovitz, was intended to just be for Moore and then-husband Bruce Willis' family.

"It was one they did for me and the family and I said, 'Wouldn’t it be amazing if they had the courage to put me on the cover?' And they called back and wanted to do it," Moore, now 56, told Jimmy Fallon on "The Tonight Show."

DEMI MOORE SAYS SHE WAS RAPED AT 15

Though other stars, including Britney Spears and Jessica Simpson, have since posed pregnant and nude in the press, Moore's was the first cover image of its kind.

"I think it was an important moment... that changed the way we look at women when they’re pregnant," she said.

Demi Moore posed nude for a private photo in 1991 while pregnant with Rumer, her first child with then-husband Bruce Willis. The photo ended up covering Vanity Fair. (Vanity Fair)

"It’s pretty incredible that she wanted to put an almost 57-year-old woman on the cover. It’s high fashion," she said.

The "G.I. Jane" star is currently promoting her memoir, "Inside Out," which she told Fallon was an important step in her own healing process after a lifetime of struggles with addiction and various traumas, including being raped when she was 15 years old and saving her own mother's life from an overdose.

"To do this and have this be something that’s like fluffy and promoting yourself, all the things that are good, then you’re missing the opportunity," Moore said. "I think a memoir is not about receiving, it's about giving, and unless you’re really willing to go on a journey of exploration of yourself, and share yourself, then there really isn't any point in doing it."

Moore explained that writing her memoir wasn't "an easy thing," but helped her understand how her life turned out the way that it did.

"The book starts at a real low point in reality, which is a realization of great loss in so many ways of my life," she admitted.

"So the journey is really exploring love and loss and exploring self-forgiveness and self-love."