Cardi B is confident that Jay-Z can bring Colin Kaepernick back into the NFL fold.

The former San Francisco 49ers quarterback hasn't played in the league since the 2016 season, after opting out of his contract following disputes over kneeling during the national anthem to protest police brutality against people of color. Kaepernick, 31, shared a video last week reminding NFL teams he was “still ready” to play if called upon.

The "I Like It" MC said that despite the controversy surrounding Jay-Z pairing his Roc Nation entertainment brand with the NFL, she believes his motives are pure.

"I think that he could make a change. I don't think he'd go on an NFL deal without an agreement," she explained. "I feel like he went in there like, 'All right, if you guys want me to work with y'all, y'all need to put my peoples in there.' I feel like he's gonna change it."

Jay-Z has faced backlash for partnering with the NFL. The rapper was an outspoken supporter of Colin Kaepernick. (Getty)

The Brooklyn-born rapper came under criticism for his NFL partnership from many Kaepernick supporters, including Kaepernick's longtime girlfriend, TV personality Nessa, for pairing his Roc Nation entertainment enterprise with the league.

"We will never turn our backs on @kaepernick7 because your idols decided to work with the same organization that is actively keeping Colin unemployed all because he peacefully protested against social injustice in black and brown communities, specifically police brutality," Nessa, 38, wrote on Instagram Thursday night.

Last week, the NFL announced that it is collaborating with Jay-Z's entertainment company, Roc Nation, which will help select music artists for high-profile performances, including the Super Bowl. 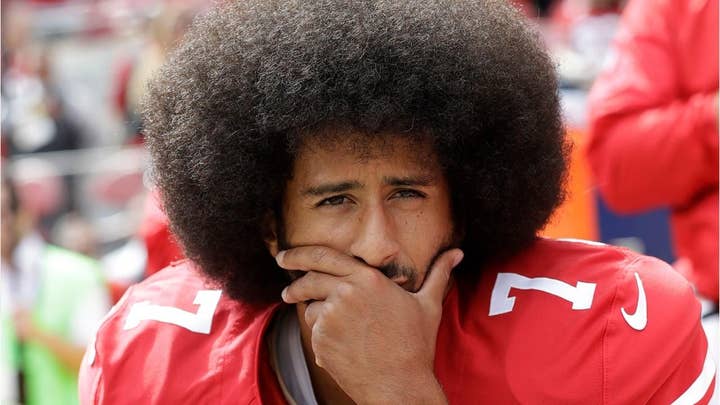 As part of the partnership, Roc Nation will have a role in the NFL's "Inspire Change" campaign, which aims to strengthen social justice. However, the Grammy-winning rapper is facing backlash for his business deal after previously showing solidarity with Kaepernick. Kaepernick gained notoriety, and the scorn of figures including President Trump, for taking a knee during the national anthem to call attention to social injustice and police brutality in minority communities.

"It’s typical for the NFL to buy different PR looks to cover up their dirt -- that’s nothing new. But what is disgusting and disappointing is Jay-Z let them use him," Nessa told her Instagram followers. "Whether Jay-Z knew it or not (I don’t doubt his intelligence-so I would think he knew) he helped the NFL bury who he said is an iconic figure, Colin Kaepernick."

Fox News' Ryan Gaydos and Joseph A. Wulfsohn contributed to this report.