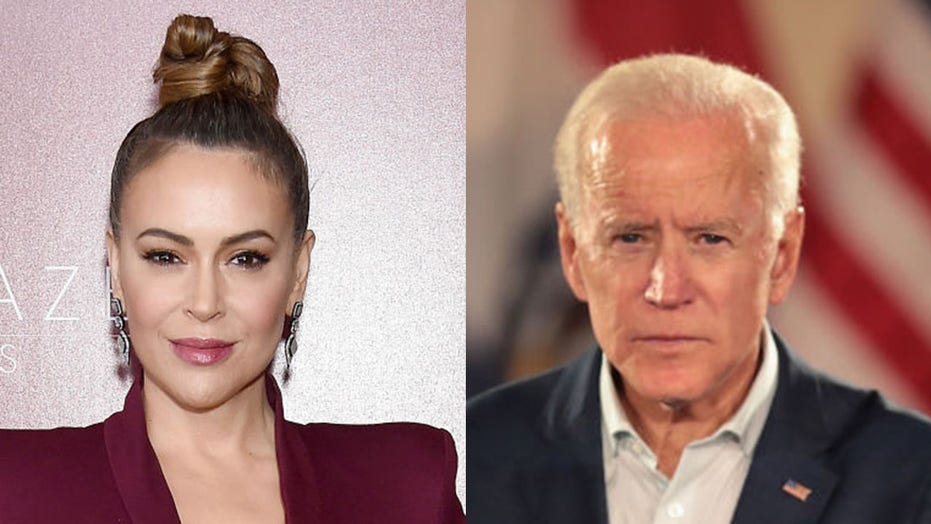 Alyssa Milano is defending her decision to stay silent in the wake of a recently surfaced allegation against former Vice President Joe Biden by former Senate staffer Tara Reade, who claims he sexually assaulted her in 1993.

Milano, 47, spoke with radio host Andy Cohen on Monday during his SiriusXM broadcast and when Cohen brought up the fact that, once again, Milano had been a trending topic on Twitter – he gave the actress the floor to speak on the matter and she did so, choosing her words gingerly.

“So it's actually quite a serious reason, I think. So I've endorsed Joe Biden. And there have been accusations against Joe about sexual assault,” Milano began. “I have not publicly said anything about this.”

The “Charmed” alum famously attended Supreme Court Justice Brett Kavanaugh’s Senate Judiciary Committee hearing on Capitol Hill in 2018 where Christine Blasey Ford testified that he sexually assaulted her in the early-1980s. She said she has always taken a wait-and-see approach to these sensitive matters and that the predicament Biden has found himself in is no different.

She explained to Cohen: “If you remember, it kind of took me a long time to publicly say anything about Harvey [Weinstein] as well because I believe that even though we should believe women and that is an important thing. And what that statement really means is like, you know, for so long, the go-to has been not to believe them. So really, we have to sort of societally change that mindset to believing women."

“But that does not mean at the expense of not, you know, giving men their due process and investigating situations and giving, you know, it's gotta be fair and in both directions," Milano added.

Though Milano has been among many women in Hollywood on the front lines during the #MeToo and Time’s Up movements that have swept over various industries over the last three years, the social activist said her support of Biden mostly stems from her longstanding relationship with the presidential hopeful.

In addition, Time’s Up, the organization established in the thick of the #MeToo movement to help survivors tell their stories and fund court cases by accusers, determined the allegation against Biden wasn't sufficient enough to move forward with an investigation.

Alyssa Milano, pictured here in 2018, said she was at the hearing in support of Christine Blasey Ford and was invited as a guest of Sen. Dianne Feinstein.  (AP, File )

“So, I've been very vocal about Biden and my support for him. I've known him for a long time,” said Milano. “And I did do my due diligence because part of it was that – and the article that sort of stood out to me was that Time's Up decided not to take the case. And so, you know…”

Cohen chimed in to carry on Milano’s point, adding, “That was important to you. That meant, 'Well, maybe there's more to this story here.'”

“Right,” Milano confirmed. “I did my work and I spoke to Time's Up and I just don't feel comfortable throwing away a decent man that I've known for 15 years in this time of complete chaos, without there being a thorough investigation and I'm sure that the mainstream media would be jumping all over this as well if, you know, if they ...”

Cohen jumped in once more: “If we weren't in a pandemic or if there was more credible, if there was evidence that was…”

“You are getting dragged by the Bernie Bros,” said Cohen.

“Right,” Milano said. “They're calling me hypocritical for, you know, and saying that I'm a fake feminist and all of this stuff that I'm still trying desperately to stand back and be sort of objective about this because I don't want this to you know – I sent the #MeToo tweet over two years ago. I never thought that it would be something that was going to destroy innocent men. Right? Like, we don’t want that to happen either.”

She concluded: “So we have to find this balance in the 'believe women movement' and also giving men their due process. And, you know, realizing that we're destroying lives, if we publicly don't go through the right steps in order to find out if an accusation is credible or not.”

For her remarks and subsequent about-face, Milano was lambasted on social media with many Twitter responders labeling her a "hypocrite."

"All that due process she wanted to give Kavanaugh. spare me," one user wrote while including a 'rolling eyes' emoji.

"You hijacked #MeToo (a mvt meant to help sexual assault victims), politicized it and now you just delegitimized it, robbing victims of any hope of representation in the future. If there is justice in this world, i hope it finds you," said another Twitter user as many others shared the sentiment.

"Oh so you investigated and deemed it not credible, but believe other women," wrote another social media responder.

Biden has vehemently denied the newly surfaced allegation, calling the claim “false” in a statement to Fox News after the interview with Reade — an apparent supporter of Biden’s primary rival, Sen. Bernie Sanders, I-Vt., who said she was a staff assistant for Biden in 1993 when he was in the Senate — went public in The Intercept.

“Women have a right to tell their story, and reporters have an obligation to rigorously vet those claims. We encourage them to do so, because these accusations are false,” Kate Bedingfield, deputy campaign manager and communications director for the Biden campaign, said in the statement.