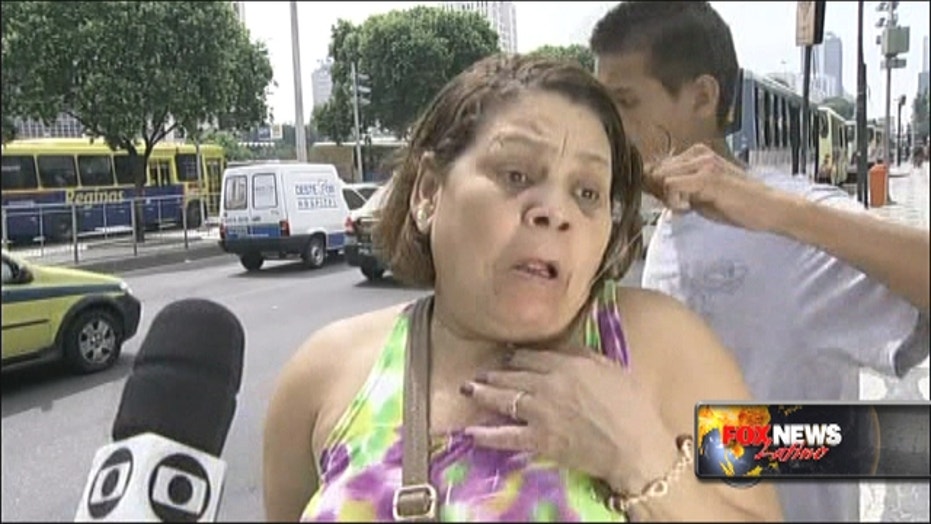 Robber Tries To Steal From Woman During TV Interview

Robber attempts to steal from woman as she is being interviewed about crime on television.

On Wednesday, a reporter for TV Globo, the Brazilian broadcast television network, was doing a man-on-the-street segment about crime. As he was speaking to an unnamed middle-aged woman, a young man approached and grabbed at her chain necklace.

The woman managed to hang onto the jewelry, and the camera recorded the would-be thief trying to run away down a busy avenue. The journalist ran after him, but gave up the chase quickly. (The thief's image is blurred out in the video in case he is a minor – criminal records of underaged kids are fiercely protected by the Brazilian legal system.)

Rampant crime is nothing new on the streets of Rio but, with the World Cup starting in a couple of months, there is a new urgency in trying to bring it under control.

Police have stepped up security ahead of this year's World Cup with thousands of police officers and Brazilian Marines visible in the city's labyrinth of slums.

According to National Public Radio, however, crime is soaring. Rio police report that the theft of cell phones has gone up 121 percent in the last year. Robberies on buses in the city have spiked 118 percent. In the bohemian neighborhood of Santa Teresa, street robberies have gone up 93 percent.

A newspaper report in O Globo on Thursday warned that 14 cash machines at Rio's international airport had been targeted by criminals who have been duplicating the  ATM cards of tourists.

"I don't carry anything anymore, only the bus fare and that's it," said one resident.