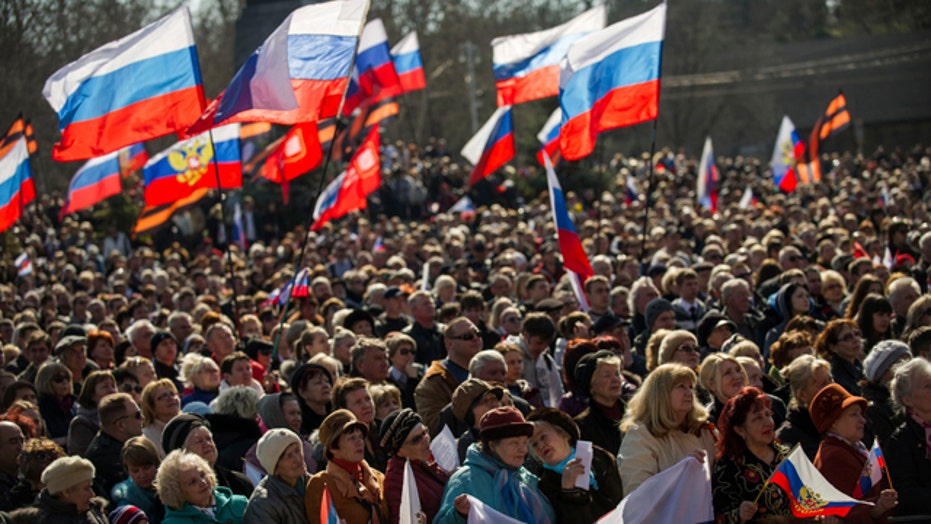 Should the US support a military buildup in Ukraine?

Russian President Vladimir Putin’s decision to annex Crimea from Ukraine has Western officials and policy analysts on edge over what Moscow’s long-term strategy is for the region.

In an interview with Fox News National Security Analyst KT McFarland, Glen Howard, president of the global research think tank the Jamestown Foundation, gave his take on Moscow’s next move:

“There has been no effective U.S. strategy in this region other than being Moscow-centric,” said Howard. “He [Putin] got his fingers in a couple areas that are really going to put pressure on the West simultaneously.”

The U.S. and its Western allies should focus on Georgia and Moldova, said Howard, pointing out the regions as the next possible hot spots. He added, “I think his next move is probably going to be in Eastern Ukraine.”

Putin is looking for a way to force Ukraine’s officials to side with his government. “These continuing riots and demonstrations by Russian provocateurs living in Eastern Ukraine is going to continue to be the way to put pressure on them,” said Howard.

He points out Putin’s strategy is “to keep moving pieces on the chess board simultaneously … what he might try to do [in Eastern Ukraine] is create the type of conditions for some type of intervention and to test them.”

Experts have debated whether a military buildup by Ukraine could be a deterrent to further Russian aggression. Howard sees beefed up armed forces as crucial for Kiev.

“What they [Ukraine] need help with now is building their army; and we need to get some boots on the ground in the sense of military training,” said Howard.  “Not letting us do the haul and fighting on behalf of Ukrainians, they don’t need that from us – what they need is satellite intelligence information.”