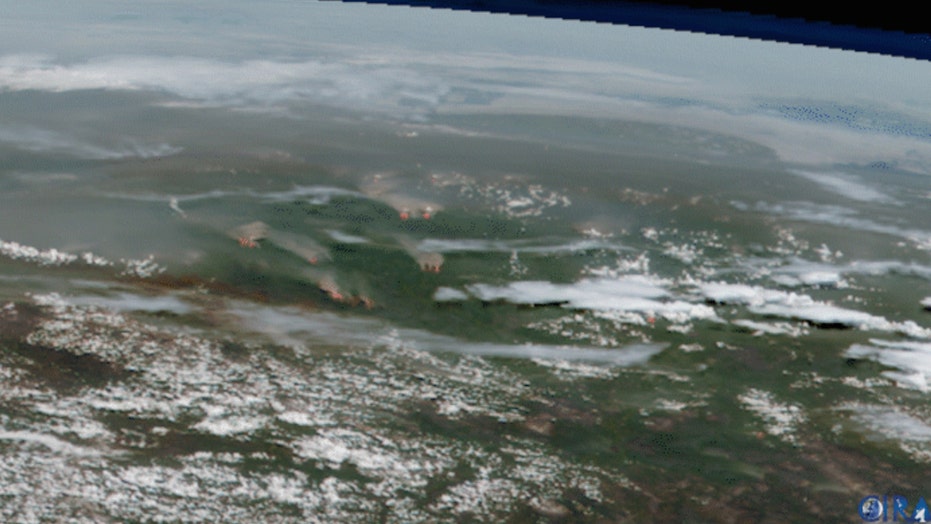 Flames and smoke were captured on satellite imagery as dozens of wildfires raged above the Arctic Circle in Siberia during a sweltering regional heat wave.

Russia's Federal Forestry Agency said Monday in a news release that the main causes of the fires are "human and thunderstorm factors."

During the week of June 15, emergency managers and related personnel eliminated more than 330 forest fires in 49 different regions of Russia.

As of Monday, officials said there are 72 currently active wildfires burning in Russia, with sizable blazes in Siberia.

In the Sakha Republic, more than 680,000 acres are burning, according to Avialesokhrana, the government agency that monitors forest fires.

Imagery from NOAA shows the flames and smoke spreading across the region.

Scientists at NOAA’s National Centers for Environmental Information said the land and ocean temperatures for the month of May 2020 showed Asia (where Siberia is located) had its highest May temperature departure on record - 2 degrees Celsius, or 3.6 degrees Farenheit - above normal.

A global map showing places that are warmer (red) or cooler (blue) in May 2020 based on long-term averages. Much of Russia has seen above-normal temperatures since May. (MODIS/NEO/NASA)

Over the weekend, the Siberian town with the world's widest temperature range recorded a new high amid a heat wave. The temperature in Verkhoyansk hit 100.4 F (38 degrees C) on Saturday, according to Pogoda i Klimat, a website that compiles Russian meteorological data.

In this handout photo provided by Olga Burtseva, an outside thermometer shows 86 F around 11 p.m in Verkhoyansk, the Sakha Republic, about 2900 miles northeast of Moscow, Russia, Sunday, June 21, 2020. A Siberian town that endures the world's widest temperature range has recorded a new high amid a hear wave that is contributing to severe forest fires. (Olga Burtseva via AP)

The town is above the Arctic Circle in the Sakha Republic, 2,900 miles northeast of Moscow.

The town of about 1,300 residents is recognized by the Guinness World Records for the most extreme temperature range, with a low of minus-90 F and a previous high of 98.96 F.

The World Meteorological Association said Tuesday it is working to verify the temperature reading.

If it is verified, it would be the hottest temperature ever recorded north of the Arctic Circle, according to NOAA.

The reported high temperature and wildfires suggest yet another possible sign of global warming in the Arctic, which the agency said is among the fastest-warming regions in the world and is heating at twice the global average.

“Apparently, this particularly region of eastern Siberia has very, very cold extremes in winter, but is also known for its extremes in summer, so temperatures above 30 degrees Celsius in July are not unusual," World Meteorological Organization spokeswoman Clare Nullis said. "but obviously 38 degrees Celsius is exceptional.”

“We’ve seen satellite images this morning, and it’s just one mass of red -- it’s striking and worrying,” she told a U.N. briefing in Geneva.

The WMO has not previously verified possible records for the “highest temperature recorded north of the Arctic Circle,” but is considering creating such a category given the “interest in this extreme observation,” the agency said.