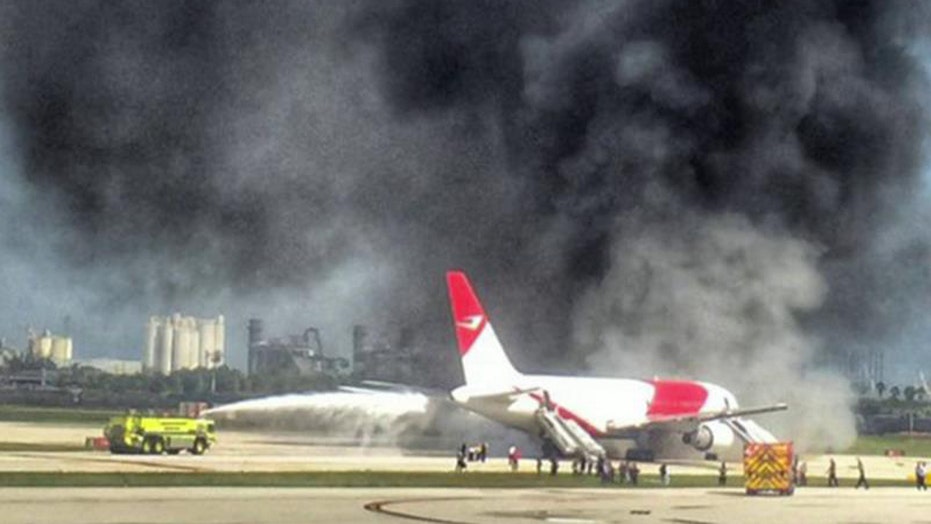 Dynamic Airways plane was taxiing for departure from Fort Lauderdale

HIALEAH, Fla. (WSVN) – Surveillance cameras near a convenience store in Hialeah captured a mother fighting off a trio in an attempted car-jacking.

The masked men allegedly approached the victim next to a gas pump at a Tom Thumb, Monday night.

The men first attempted to get into the car of another woman, but she locked herself inside her vehicle. They then moved on to the mother's red convertible, on the other side of the gas pump. Surveillance camera footage showed one of the men jumping in the passenger seat and the other on the driver's side, but the victim is seen fighting back and ripping the ski mask off one of the subjects, who are then seen fleeing on foot.

Police said the woman inside that car fought back fearing her kids would have been abducted in the theft. "She was a mom, and what that bad guy didn't know, in the back seat of that car were two kids," said Hialeah Police Sgt. Carl Zogby. "She wasn't gonna let them be taken, so she fought, she dragged the guy out of the car, and they both ran away like cowards."

Investigators said the two men, later identified as Juan Carlos Gonzales and Nicholas Rosado, took off in a getaway car driven by Rebecca Utria. Their high-speed getaway caught the attention of a nearby police officer. "A Hialeah Police patrolman, who had no idea of what had just happened, sees this car speeding, follows the car. The car ends up crashing against a fence," Zogby said.

The suspects were then taken into custody. They face several charges, including attempted carjacking and fleeing police.

No one was hurt in the incident.

In bond court Tuesday afternoon, Utria was asked whether she is employed. "No. I'm in the process," the suspect replied.

The judge has ordered all three to stay away from the two women they are accused of trying to car-jack if they post bond. Their bond is currently set at $25,000 bond each.

Gonzales, 17, was determined to be a minor. He is expected to appear in court on Thursday.

The other two suspects remain behind bars.

For more stories from Miami go to WSVN.com.