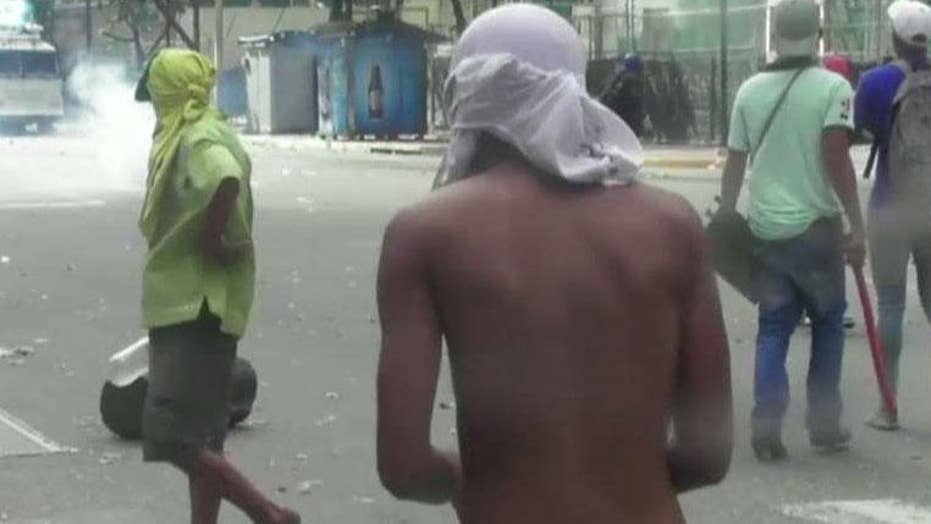 Could socialist policies turn the US into the next Venezuela?

As a standoff hardens in the Venezuelan capital of Caracas between U.S. diplomats and the country’s “illegitimate” president, Nicolas Maduro, experts say security at the American Embassy may become a critical issue if the situation in the streets goes from bad to worse.

The embassy and its staff are already caught in a hard space amid continuing mass protests in neighborhoods across the country, between a Maduro government that demands the U.S. leave, and opposition leader and National Assembly President Juan Guaido - who declared himself president this week - and has called for the U.S. Embassy to remain open.

The State Department has issued an order – based on a “current security assessment of the situation” – for non-essential embassy staffers and their families to leave. But officials insist there no plans to completely shutter the embassy.

FROM SECRET MEETINGS TO SOCIAL MEDIA TO MILITARY RUMBLINGS: HOW VENEZUELAN PROTESTS CAME TO LIFE

With Maduro’s deadline for the U.S to remove all staff set to run out Saturday afternoon, the immediate question is what - if anything - he will do about it. As well as what U.S. officials have done to secure the embassy to this point, and what provisions have been made to secure the facility if the situation deteriorates.

The U.S flag flies outside the U.S. embassy in Caracas, Venezuela, which remains open in the face of continuing local unrest. (AP Photo/Fernando Llano)

“It is pretty secured in the middle of a residential zone, and the Marines are still there,” one Venezuelan activist told Fox News. “I don’t see anything happening at the embassy.”

The primary U.S. agency in charge of the security is the State Department's Bureau of Diplomatic Security (DS), which work with the U.S. Marines and local contractors or military personnel to support embassy perimeter security, according to Erik Rasmussen, Head of Cybersecurity and Risk Management Solutions at Grobstein Teeple. The DS bears the core responsibility for providing a “safe environment for the conducts of U.S foreign policy,”according to Rasmussen.

“The U.S. embassies are considered U.S. enclaves, so the biggest impact could be the jettison of local foreign nationals who work inside could probably be forced to leave,” he said. “Along with the perimeter guard force. U.S. personnel in the embassy are likely allowed, or limited to travel, to and from the embassy, but are probably not permitted right now to travel outside Caracas.”

Rasmussen also highlighted the security risk 'definitely increases” with demands and threats like those issued by Maduro. “And from the perspective of the Venezuelans, they will suffer because consular services will be either be eliminated or cut back, so trying to get a visa or seek asylum could be next to impossible to achieve,”

Caracas-based journalist Noris Argotte noted there is always a group of Marines and military attaches guarding the compound, but noted all embassies in Caracas also use a team of local Venezuelan police and military officers to “support the security.” That's typically the case with diplomatic missions around the world.

“My guess is that if local security forces are allied with Maduro, the embassy will have to rely only on their military and security staff,” she said.

Maduro does have options, short of ordering the forceful takeover of the embassy.

“Maybe the electricity will go out in that neighborhood, or the gas won’t arrive,” Diosado Cabello, head of the Maduro created-Constituent Assembly, told state television this week.

The U.S embassy itself is considered to be heavily fortified and “built like a fortress” to withstand terrorist attacks, with at least one – possibly more – underground bunker levels. Situated in the affluent Chula Vista district, the five-story, 100,000-square foot, granite-garbed building is poised atop a hill in open view to most of Caracas. The American flag waves prominently defiantly outside, surrounded by high fences and heavy security.

Johan Obdola, President of the Canada-based Global Organization for Intelligence (IOSI) and a former counter-narcotics chief in Venezuela, said that the embassy has long been well-equipped with food supplies, washrooms, electric power generators, and other accommodations "providing a secured staying to its personnel for some time."

"The security outside the perimeter of the embassy is conducted by security personnel hired by the embassy, and the Bolivarian National Police. The infrastructure of the embassy can stand a certain level of external armed attacks, and there are areas for aerial evacuations via helicopter," he said. "So, the embassy stand a great location and capacity to hold for some time a potential external attack, conducted by the Venezuelan armed forces or its supporters.

"But would it be possible the Venezuelan armed forces attack the embassy? My belief is no, as Maduro and its top generals know in case of an armed military attack, the response will be in full, for which the regime does not have any chance. But there are other actors, and they are the most dangerous ones."

Those other actors, stressed Obdola, are known as the "colectivos" armed and trained by the Cuban and Venezuelan regimes - a kind of pro-government militia group well-equipped ad well-versed in urban guerrillas warfare. 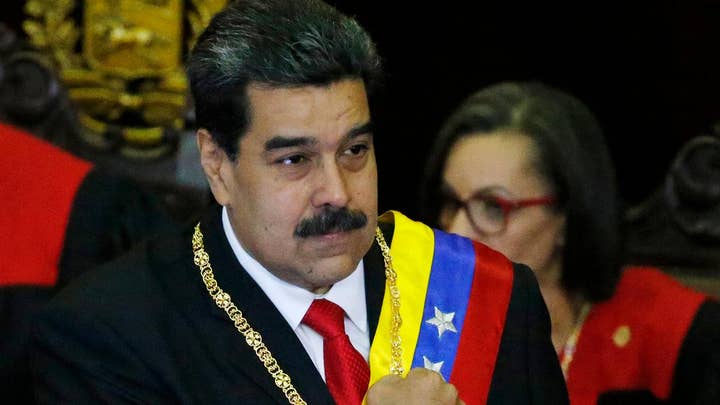 Del Wilber, a former U.S intelligence officer, stressed all American embassies are extremely well-guarded – both in terms of what you can and cannot see.

“Critical areas of the embassy should be able to function at least for a short while on emergency power and other arrangements,” he noted. “But no embassy can withstand a determined attack using tanks or heavy weaponry. My sense is that Maduro would first cut electrical power, make verbal demands along with other posturing, before a type of attempt to overrun the embassy.”

Wilber also noted the U.S Marine Security Guards “primary function is protecting classified equipment and information,” but “embassy protection is the responsibility of the host nation.”

“The problem is, in my experience, these plans were developed years ago, are not often up to date, and very few people have read them or know what they say so in an emergency it could be dicey trying to get everyone on the same sheet of music,” Lewis asserted. “The EAP should incorporate all outside entities that may be helpful to securing or evacuating the Embassy.

"For example, as a hypothetical, in many countries, there are U.S. businesses that may have vehicles, radios, facilities that could be used in an emergency.  As all of this is occurring, the U.S. would also be moving other military assets to support and protect the Embassy. Bottom line is, it's more than the Marines, but not what you would want to repel a large-scale attack.”

It was business-as-usual at the embassy Friday, with staff coming and going, and cars outside the gates waiting to enter. But however normal or not the situation remains, the State Department has said it will take all necessary measures to protect U.S personnel.

Security officials want to avoid a repeat of past diplomatic facility disasters like the 1979 Iranian crisis, in which 50 Americans were held hostage inside the embassy in Tehran for more than a year, or the 2012 deaths of Ambassador Chris Stephens and three other Americans at a U.S. diplomatic compound in Benghazi, Libya.

The embassy's location makes it less likely to be a target of Maduro security forces.

“There are only two ways to enter, and it's surrounded by other embassies,” one nearby local political activist said. “The chances of Maduro using force are extremely low. He isn’t stupid like that.”

What will become of the Venezuelan government remains the crucial point of uncertainty. Since 2015, the once-prosperous Latin American country – lathered in oil money – has crumbled into chaos, plagued by dizzying hyperinflation and a mass humanitarian crisis as a result of Maduro and his predecessor Hugo Chavez’s socialist economic policies. More than three million have fled into neighing nations, and large swaths of those who remain took to the streets yet again this week demanding Maduro step down.

At least 120 people are reported to have been fatally shot by security forces or pro-government groups in the demonstrations this week. Maduro security forces have also carried out raids and arrests on dissidents' homes.

And Kremlin-linked contractors have reportedly been dispatched to help safeguard Maduro from any further attempts to usurp him from power.

Yet on Friday afternoon, “interim President” Guaido announced more mobilization efforts are underway, and spoke of “another concentration” of protests next week.

“Everything depends on whether the Venezuelan military backs Maduro to the point of attacking the embassy or harming one of our diplomats,” one U.S intelligence expert added. “But the U.S remains hopeful that the military disengages from Maduro.”