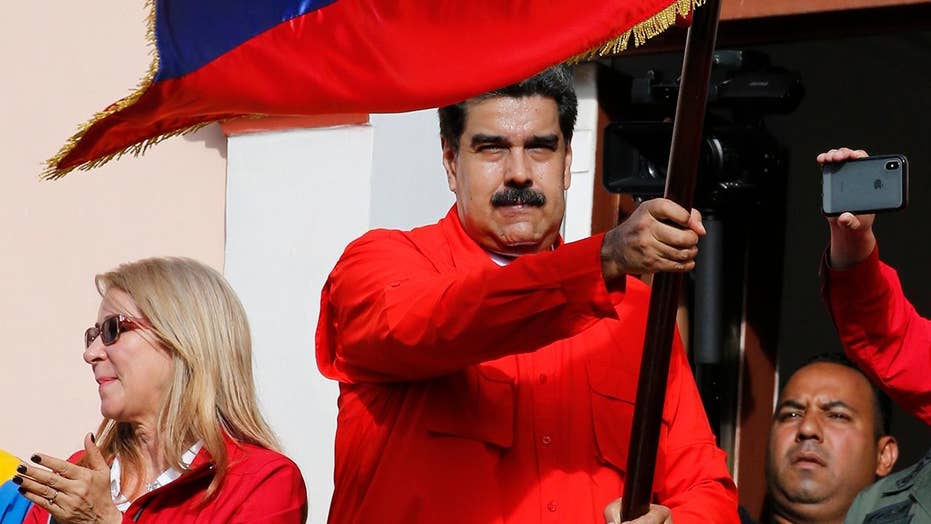 Draped in the flag of their country – once the richest and most prosperous in Venezuela – thousands of Venezuelans continue to pour into the streets, vigorously calling for reigning President Nicolas Maduro to be removed from office.

“There are about a couple thousands of opposition supporters chanting against Maduro, calling him a usurper, dictator, and murderer, some even chanting the national anthem,” Noris Argotte, a 30-year-old local journalist, told Fox News in a phone interview, speaking from Venezue. “As a Venezuelan, I just feel that is our call for freedom, that this is our chance to prove that we need a change, and that our voices should be heard worldwide.”

With the beat of a drum and despite the early morning rain on Wednesday, protesters marched and shouted, “Who are we? Venezuela! What do we want? Freedom!”

Protests against the Nicolas Maduro regime in Caracas, Venezuela, on Wednesday.

Wednesday also coincided with the 61st anniversary of the 1958 uprising that deposed military dictator Marco Perez Jimenez, a symbolic occasion not lost among those surging through what were traditionally “pro-Chavista” pockets of the capital, Caracas.

“Things are getting worse by the day. The division and the violence are escalating to alarming levels,” Argotte said of the current crisis. “I feel the mood is set for a change. But it will depend on how able prove the opposition to capitalize the momentum.”

Protests against the Nicolas Maduro regime in Caracas on Wednesday. (Fox News)

According to Julio Borges, a Venezuelan opposition leader and former National Assembly president who has been living in exile in the Colombian capital of Bogota, the demonstrations will “have a huge impact within Maduro’s regime and within the Army.”

“There has been a decision made by the Venezuelan people and by the international community to build a definite outcome for democracy,” he told Fox News. “But it’s a process, and without any doubt, it will end with a new chapter for democracy. This is due to the connection between the international community and the Venezuelan people working together for freedom.”

Guaido has upped the ante, and was “sworn in” as president in an open town hall in Caracas. He has pledged to form an interim government that will help alleviate the poverty and suffering for Venezuelan people, and take immediate action to bolster the economy.

That economy is in dire economic shape and has been gripped by a hyperinflation rate of more than one million percent. He has also called on the military to turn against the regime and offered amnesty. The government has in turn threatened to jail him.

Demonstrations have become part of an invigorated effort by opposition leaders to usurp Maduro, who was sworn into a second term earlier this year, despite much of the international community calling the most recent elections a farce.

But taking a dissident stance towards what many deem to be a “dictatorship” come with inherent dangers. Within the last day, at least four people have been killed, with many more detained.

Venezuela's economy has been gripped by a hyperinflation rate of more than one million percent.

Protests in 2017 left more than 120 dead and hundreds more wounded, after Maduro sent the National Guard to defy the anti-government demonstrators. In the ensuing months, dozens of opposition activists were jailed and, according to human rights groups, subjected to torture behind bars.

"The first and most important thing is that a guy was shot in the chest in a street near Sucre Square, that is some blocks away from Bolivar Square where the main part of the march is taking place,' activist and university teacher, Miguel Mandrade, 28, lamented from the protests in San Cristobal. "It's smelling like tear gas now... and the internet is being shut down, the texting is working but internet data is not available. The connections comes and goes.

But Maduro and his allies have responded to the protests by urging their supporters to also take to the streets and have accused opposition leaders – in his words “terrorists” – of scheming with the United States and perpetuating an “economic war.”

“The imperialists and the oligarchs are desperate to run Venezuela directly,” Maduro declared this week.

While more than three million have fled the ailing nation since 2015 – faced with dramatic food and medical shortages – the Venezuelan government has largely denied the existence of a humanitarian crisis.

A local journalist vowed to stay in Venezuela as long as he could.

For those left behind, staying behind – despite the extreme adversity – is a sense of duty.

“I plan to stay as much as I can, one of the biggest problems here is the censorship and the lack of independent media to inform, as a journalist and as a Venezuelan, I consider my duty to stay and keep fighting for my country with my job and by telling the truth,” Argotte said. “But we would like the Americans to understand that Venezuela is country of very valuable people, people who are fighting for their rights. Venezuelans want to stay in their country and Venezuelans want to restore democracy.”

Ricardo Diaz, an 18-year-old from San Cristobal, too declared that he has no intention of leaving and that he hoped to continue a peaceful push for change.

"Imagine an entire city in protest peacefully. We're thankful to the American government for all their efforts, we feel good and patriotic by participating in this protest today," he said. "But the situation could get worse depending on the Armed Forces."

And César Oropeza, 45, a film writer and director located in El Rosal, Caracas – just a few blocks from the main point of concentration – also expressed concern that violence could escalate and spread from the west to the east of the capital.

“Chances are violence is going to occur, as it is happening right now in the west of the city, but that will be later. Some of our people are asking peacefully for a change inside the precepts of our constitution. We all are asking for Maduro to leave the government and for the end of this 20 years old Communist tyranny,” he declared. “I’m happy but a bit scared. With an enemy within our lines, it’s going to be difficult to kick out this regime of murderers, terrorist, guerrilla groups and narco. Socialism is a plague.”

The military could make the sitution worse, one 18-year-old man said. (Fox News)

Oropeza also stressed that real change will not happen overnight.

“It’s going to take years of suffering to get back even to the normality of an average third world country. That said, I still have hope. Today is the beginning of a positive change for Venezuela. Our suffering will be not in vain,” he added. “But I think it’s going to take months to put out this fire either we win or we lose.”