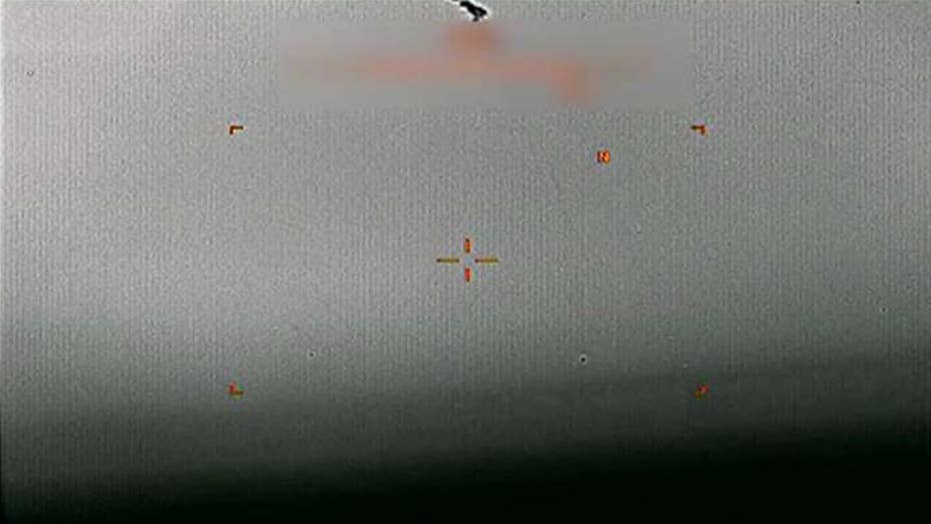 Pentagon releases footage of US drone being shot down by Iran

Jennifer Griffin predicts Trump's military response to Iran shooting down a U.S. drone would be much different if an American had been injured or killed.

The smoke trail of a U.S. Navy drone that was shot out of the sky over the Strait of Hormuz by Iran can be seen in video released by the Pentagon on Thursday as tensions escalated over what military officials described as an "unprovoked attack."

The U.S. Navy RQ-4A Global Hawk, an unmanned aircraft with a wingspan larger than a Boeing 737 jetliner, was brought down by an Iranian Islamic Revolutionary Guard Corps surface-to-air missile that was fired from near Goruk, Iran on Wednesday night, according to Lt. Gen. Joseph Guastella, head of U.S. Air Forces Central Command.

"This was an unprovoked attack on a U.S. surveillance asset that had not violated Iranian airspace at any time during its mission," Guastella said. "This attack is an attempt to disrupt our ability to monitor the area following recent threats to international shipping and free flow of commerce."

The location where the U.S. Navy RQ-4 was downed by a surface to air missile fired by Iran, according to U.S. military officials. (Department of Defense)

Guastella said at the time it was struck by the missile, the drone was operating at a "high-altitude" approximately 34 kilometers from the nearest point of land on the Iranian coast.

In a video released Thursday afternoon, the smoke trail of the drone can be seen in a black-and-white video as it plummets from the sky.

Guastella said the drone landed in "international waters" about 20 miles from Iran. U.S. officials told Fox News that authorities were racing to find the wreckage in the water before Iranian forces did.

The Navy RQ-4A Global Hawk drone that was shot down by Iran. (Fox News)

The U.S. Navy’s RQ-4A Global Hawk drone provides real-time intelligence, surveillance, and reconnaissance missions  "over vast ocean and coastal regions," according to the military. The drone was deployed to the Middle East in the past few days as part of reinforcements approved by President Trump last month.

The high-altitude drone can fly up to 60,000 feet or 11 miles in altitude and stay aloft for 30 hours at a time. It's used to spy on Iranian military communications and track shipping in the busy waterways. Each drone costs up to $180 million dollars.

Iran claimed the drone "violated" its territorial airspace, while the U.S. said the missile fire was "an unprovoked attack" in international airspace over the narrow mouth of the Persian Gulf.

President Trump says he finds it hard to believe that the downing of a U.S. drone by Iran was intentional and that it may have been a mistake by someone in command.

President Trump warned that America "will not stand" for Iran shooting down a U.S. drone, while at the same time leaving open the possibility that the attack was unintentional. “They made a very big mistake,” Trump told reporters in the Oval Office, alongside Canadian Prime Minister Justin Trudeau.

“I find it hard to believe it was intentional, and it could have been someone who was loose and stupid,” he added.

The remarks left unclear the likelihood of a U.S. response.

The downing of the drone, via surface-to-air missile, was the most recent Iranian provocation in the region, coming on the heels of a disputed attack on a pair of oil tankers in the Gulf of Oman last week -- which the U.S. has blamed on Iran.