President Trump says he finds it hard to believe that the downing of a U.S. drone by Iran was intentional and that it may have been a mistake by someone in command.

President Trump warned Thursday that America "will not stand" for Iran shooting down a U.S. drone over the Strait of Hormuz, while at the same time leaving open the possibility that the attack was unintentional.

“They made a very big mistake,” Trump told reporters in the Oval Office, alongside Canadian Prime Minister Justin Trudeau.

“I find it hard to believe it was intentional, and it could have been someone who was loose and stupid,” he added.

The downing of the drone, via surface-to-air missile, was the most recent Iranian provocation in the region, coming on the heels of a disputed attack on a pair of oil tankers in the Gulf of Oman last week -- which the U.S. has blamed on Iran.

Iran claimed the U.S. drone on Thursday was over Iranian airspace when it was shot down -- but American officials stated unequivocally the incident occurred in international airspace.

"Iranian reports that the aircraft was over Iran are false," Capt. Bill Urban, a U.S. Central Command spokesman, said in a statement. "This was an unprovoked attack on a U.S. surveillance asset in international airspace."

Trump was vague on what the U.S. response would be, telling reporters “you’ll find out” what the U.S. would do next. He also confirmed the drone was over international waters and unmanned. He said that it would have made a "big difference" if it was a manned drone.

“This country will not stand for it, that’s what I can tell you,” he said.

Trudeau said that Canada was “very concerned by the escalation from Iran” and pledged to work with international allies in resolving the crisis.

LINDSEY GRAHAM: IF IRAN 'ATTACKS SHIPPING AGAIN,' US SHOULD CONSIDER 'TAKING OUT THEIR NAVY, OIL REFINERIES'

The Navy RQ-4A Global Hawk drone deployed to the Middle East in the past few days as part of reinforcements approved by President Trump last month.

The high-altitude drone can fly up to 60,000 feet or 11 miles in altitude and loiter for 30 hours at a time. It's used to spy on Iranian military communications and track shipping in the busy waterways. Each drone costs up to $180 million. 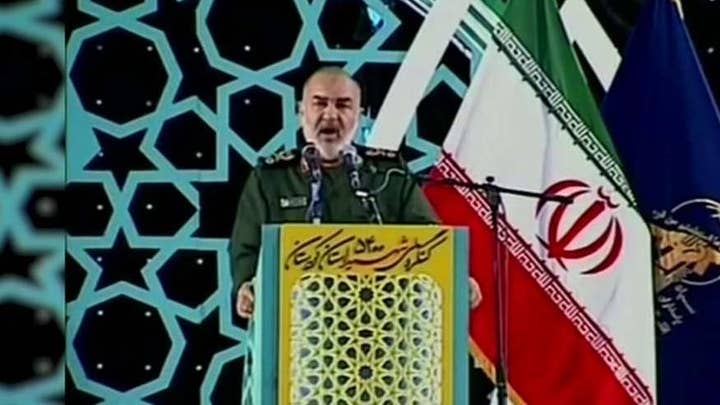 A commander for Iran's Revolutionary Guard claimed the drone was shot down over Iranian airspace to send a "clear message" to the U.S., and marked the first direct Iranian-claimed attack of the crisis.

"We do not have any intention for war with any country, but we are fully ready for war," Revolutionary Guard commander Gen. Hossein Salami said in a televised address.

But on Thursday, Trump stood by his prior claims that Iran is less of an international threat now than when he took office.

"When I came here, Iran was in 14-18 different sites of confliction, extremely hostile...screaming 'Death to America' and I think probably Iran made a mistake," he said.