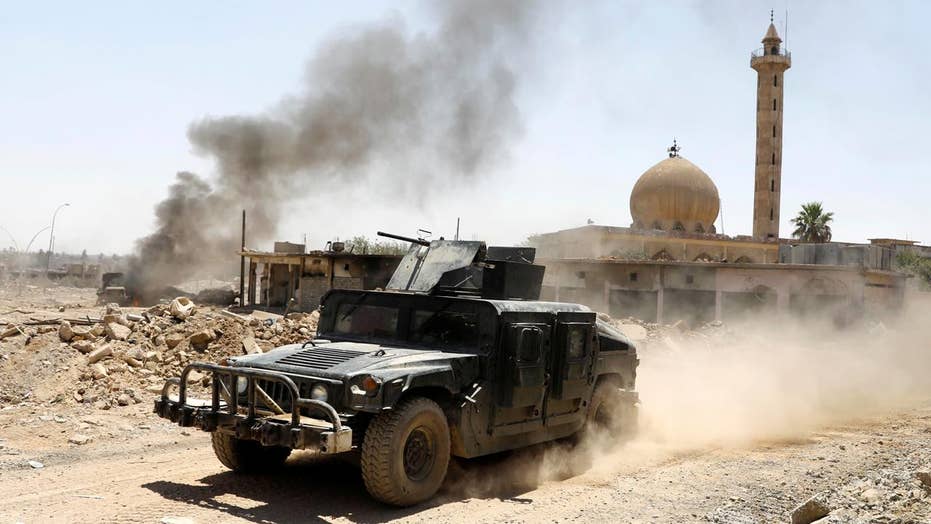 Europe on high alert as US tightens noose around ISIS

A U.S.-backed Syrian force launched a major offensive on the northern city of Raqqa on Tuesday in an attempt to capture the de facto capital of the Islamic State terror group after three years of control.

Kurdish-led Syrian Democratic Forces and Syrian Arab Coalition partners began moving toward the de facto capital of ISIS in November. Clashes under the cover of U.S.-led coalition led fighters to the northern and eastern gates of the city last week. Pentagon spokesman Capt. Jeff Davis said fighters in the city couldn't leave because all the bridges across the Euphrates have been disabled.

Lt. Gen. Steve Townsend, commanding general the Combined Joint Task Force Operation Inherent Resolve, told Fox News the operation, in conjuction U.S. special operations troops as advisors, is expected to be long and difficult, but it would deliver a blow to the idea of ISIS as a physical caliphate. It could also be a major turning point in the war against the extremists.

"It's hard to convince new recruits that ISIS is a winning cause when they just lost their twin 'capitals' in both Iraq and Syria," Townsend told Fox News.

NOTRE DAME HAMMER ATTACK SUSPECT YELLED 'THIS IS FOR SYRIA'

"We all saw the heinous attack in Manchester, England," Townsend said. "ISIS threatens all of our nations, not just Iraq and Syria, but in our own homelands as well. This cannot stand."

Airstrikes likely carried out by the U.S.-led coalition began on Monday, killing 21 people, the Syrian Observatory for Human Rights said. Raqqa is currently surrounded from the east, north and west, and opposition activists have reported intense shelling and airstrikes on the city since Monday night, which killed at least 12 people.

Davis said "Raqqa will be important step" in defeating the Islamic State group.

“Today is Day 1 of the effort to defeat ISIS in Raqqa," Davis said.

"We know that Raqqa as a capital of the caliphate was where the external operations were planned, especially plots against Europe and the West."

ISIS captured Raqqa in January 2014, one of the first cities the terrorist group gained control. It has been home to some of the most prominent leaders, including those who planned the November 2015 Paris attacks and other international assaults. However, it has lost much of its territory it initially claimed over the years due to campaigns led by several Syrian and Iraqi forces.

Davis admitted that most of the leadership and bureaucratic functions and propaganda organs of IS had already moved out of Raqqa down the Euphrates River Valley to Mayadin and Deir al Zour, estimating only several hundred fighters remaining in the city.

The extremists are not expected to give up its hold on Raqqa easily. ISIS has been fortifying its positions in Raqqa for months, setting up barriers and hanging sheets of cloth over main streets to provide cover from warplanes.

Iraqi forces launched an offensive to capture the northern city of Mosul, the largest held by ISIS, in October, and heavy fighting is still underway there.

A belt of land mines and militant checkpoints circle Raqqa. Inside, all the men have been ordered to wear the jihadi garb of baggy pants and long shirts in order to make it more difficult to distinguish militants from civilians.