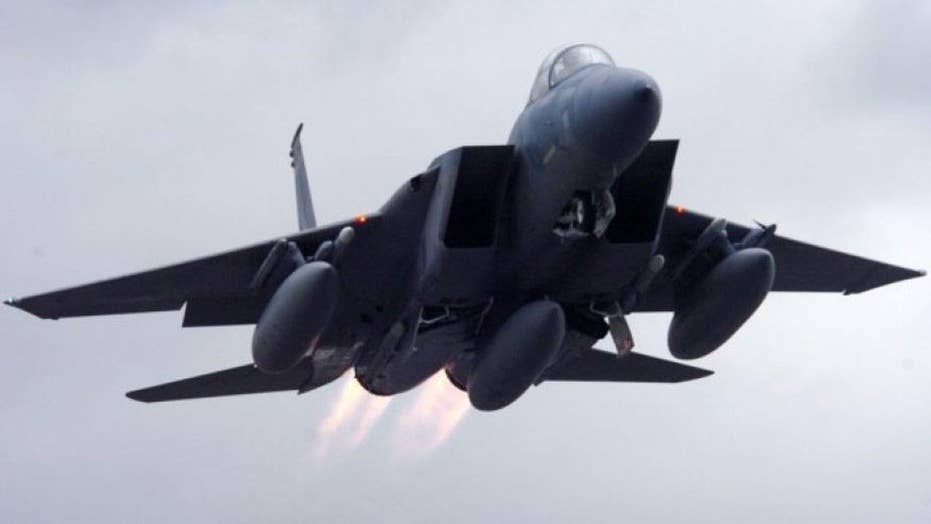 U.S. warplanes carried out airstrikes Friday that targeted an ISIS base and a senior militant believed to be behind two deadly attacks against Western tourists in Tunisia last year.

A senior U.S. official told Fox News that the target of the airstrike was Noureddine Chouchane, a senior ISIS figure in Libya. A defense official speaking to The Associated Press said Chouchane was "likely killed."

The airstrike on the base in Sabratha, west of Tripoli, was carried out by F-15s.

Local reports initially suggested that more than 30 people had been killed. However, it was not immediately clear how many ISIS terrorists were among the dead.

Chouchane is thought to have directed the March 18 attack on the Bardo Museum in Tunis, in which 24 people were killed, many of them foreign tourists. He is also believed to have some connection to the June 26 attack on a resort hotel near the Tunisian city of Sousse, where an ISIS gunman killed 38 people.

President Barack Obama last week directed his national security team to bolster counterterrorism efforts in Libya while also pursuing diplomatic possibilities for solving its political crisis and forming a government of national unity. While ISIS has emerged in other places, including Afghanistan, Libya is seen as its key focus outside of Syria and Iraq.

The U.S. military has been closely monitoring ISIS movements in Libya, and small teams of U.S. military personnel have moved in and out of the country over a period of months. British, French and Italian special forces also have been in Libya helping with aerial surveillance, mapping and intelligence gathering in several cities, including Benghazi in the east and Zintan in the west, according to two Libyan military officials who are coordinating with them. The Libyan officials spoke on condition of anonymity recently with The Associated Press on this matter because they were not authorized to speak to the press.

U.S. officials predicted early this month that it would be weeks or longer before U.S. special forces would be sent, citing the need for more consultations with European allies. Additional intelligence would help refine targets for any sort of military strikes, but surveillance drones are in high demand elsewhere, including in Syria, Iraq and Afghanistan.

Adding to the concern in Washington and Europe is evidence that the number of ISIS fighters in Libya is increasing - now believed to be up from about 2,000 to 5,000 - even as the group's numbers in Syria and Iraq are shrinking under more unrelenting U.S. and coalition airstrikes.

Fox News Channel's Jennifer Griffin and The Associated Press contributed to this report.