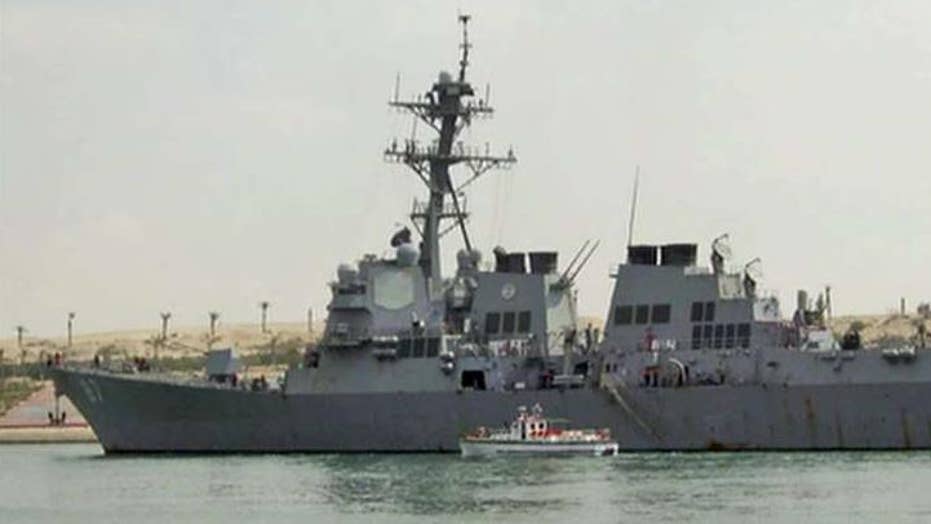 US Navy destroyer targeted by missiles from rebel-held Yemen

Rebels were backed by Iran

The Pentagon was actively working to determine who fired two missiles from Yemen targeting a U.S. Navy destroyer in the Red Sea, a Pentagon spokesman confirmed Tuesday.

Davis told reporters retaliatory strikes remained on the table, saying those who attack a Navy destroyer do so at their own peril.

The Houthis and their allies offered no reason for the launches, though they came after a Saudi-led airstrike targeting a funeral in Yemen's capital killed over 140 people and wounded 525 on Saturday.

In a statement, the Navy said no American sailors were wounded and no damage was caused to the USS Mason, an Arleigh Burke class of guided missile destroyer whose home port is Norfolk, Virginia.

An American defense official said the USS Mason used onboard defensive measures after the first missile was fired, but it wasn't clear if that caused the missile to splash harmlessly into the sea. The destroyer was north of the Bab el-Mandeb Strait, which serves as a gateway for oil tankers headed to Europe through the Suez Canal, the official said.

The Houthi-controlled SABA news agency of Yemen quoted an anonymous army official denying its forces fired on the USS Mason, without elaborating.

Last week, an Emirati-leased Swift boat came under rocket fire near the same area and sustained serious damage. The United Arab Emirates described the vessel as carrying humanitarian aid and having a crew of civilians, while the Houthis called the boat a warship.

U.S. Navy officials declined to immediately discuss what kind of rockets were used in the USS Mason incident.

Analysts with the Washington Institute for Near East Policy suggested in a report that the Houthis may have targeted the Emirati ship with an Iranian anti-shipping cruise missile, based on purported video of the attack.

Shiite power Iran supports the Houthis, but denies arming them. Any Iranian involvement could exacerbate tensions with the U.S. following a series of tense naval encounters in the Persian Gulf in recent months.

Saudi state television aired a brief clip of what appeared to be a projectile that was said to have landed in Taif, in the ballistic missile attack. The video shows the flash of an explosion, followed by images of emergency vehicles. Taif is home to Saudi Arabia's King Fahd Air Base, which hosts U.S. military personnel training the kingdom's armed forces.

The Saudi military said the missile fired late Saturday night was intercepted and caused no damage. The U.S. military's Central Command, which oversees troops in the Middle East, did not immediately respond to a request for comment.

Al-Masirah, a Houthi-run satellite news channel, identified the missile as a local variant of a Soviet-era Scud. It said the Volcano-1 missile targeted the air base.

In the Taif attack, however, the missile struck a target more than 325 miles from the border. Taif also is just outside of Mecca, which is home to the cube-shaped Kaaba that all of the world's Muslims pray toward.

The Saudi military said it earlier intercepted another ballistic missile fired Sunday on the Yemeni city of Marib.

The Houthis gave no reason for their targeting of Taif, but it comes after a Saudi-led airstrike Saturday targeting a funeral in Yemen's capital, Sanaa. On Sunday, thousands marched through the streets of Sanaa to protest the strike, one of the deadliest single attacks in the impoverished Arab country's relentless civil war.

The Saudi Foreign Ministry said its U.N. mission sent a letter on Sunday to the Security Council, expressing the kingdom's "deep regret of the reported attack" on the funeral. Saudi officials have promised to investigate the bombing.

Yemen's war is largely overshadowed by the conflict against the Islamic State group elsewhere in the Middle East, though rights groups have mounted increased criticism of the Saudi-led airstrikes in recent months for killing civilians. The U.N. and rights groups estimate the conflict has killed at least 9,000 people and displaced nearly 3 million more.