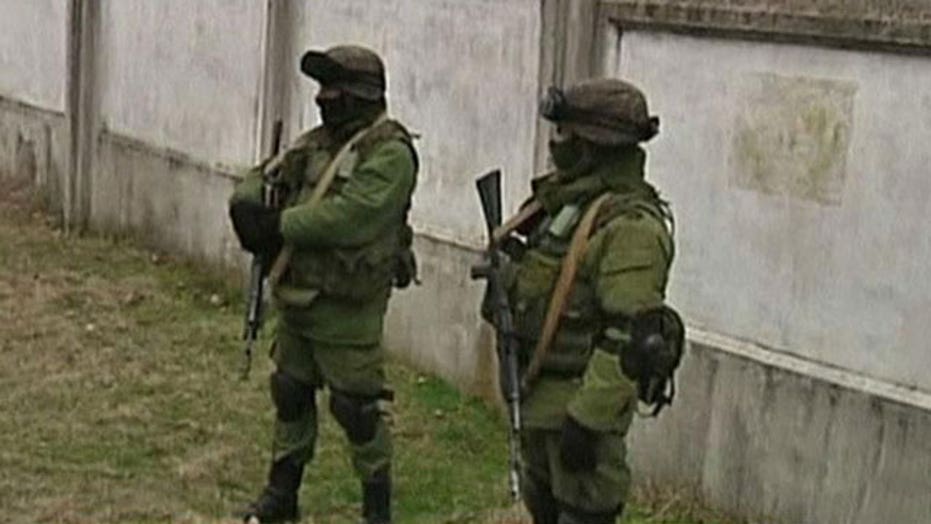 Ukraine’s interim president says the country’s parliament is starting procedures to dismiss Crimean lawmakers and to block a referendum approved Thursday that would ask the region’s voters whether or not they want to leave Ukraine for Russia.

Crimea’s parliament voted in favor of the split and called for a referendum to be held on March 16, but Oleksander Turchinov said the referendum is a farce and a crime organized by Russia’s military.

Crimea’s parliament, which enjoys a degree of autonomy under current Ukrainian law, voted 78-0 with eight abstentions Thursday in favor of holding the referendum and joining Russia. Local voters will also be given the choice of deciding to remain part of Ukraine, but with enhanced local powers.

“The premise that Crimea could hold a local referendum or a vote in their local parliaments to secede from Ukraine and join Russia is completely illegitimate under Ukraine's constitution,” Psaki said.

The vote also drew criticism from Turchinov, who said the authorities in Crimea are “totally illegitimate.”

“They are forced to work under the barrel of a gun and all their decisions are dictated by fear and are illegal,'' his spokeswoman quoted him as saying, according to Reuters. Ukraine is also opening a criminal investigation into Crimean Prime Minister Sergei Askyonov, the news agency said.

In Moscow, a prominent member of Russia's parliament, Sergei Mironov, said he has introduced a bill to simplify the procedure for Crimea to join Russia and it could be passed as soon as next week, the state news agency ITAR-Tass reported.

A referendum had previously been scheduled in Crimea on March 30, but the question to be put to voters was on whether their region should enjoy "state autonomy" within Ukraine.

Temirgaliev told the Interfax news agency that the region is ready to adopt Russian currency, according to Reuters. Crimea’s parliament has voted to set up interior, justice and fuel and energy ministries that are independent of Kiev, the BBC reports.

"This is our response to the disorder and lawlessness in Kiev," Sergei Shuvainikov, a member of the local Crimean legislature, told the Associated Press Thursday. "We will decide our future ourselves.”

A senior Western diplomat said European Union leaders, meeting in Brussels to discuss their response, "will send a clear message that the referendum won't be recognized." The diplomat spoke to The Associated Press on condition of anonymity because he wasn't allowed to discuss the leaders' closed-door talks publicly.

The region has been a part of Ukraine since 1954, when Soviet ruler Nikita Khrushchev, himself of Ukrainian origin, formally transferred ownership of the region to Ukraine from Russia. In 1992, following the collapse of the Soviet Union, Crimea briefly became an autonomous region before its parliament agreed to remain a part of Ukraine.

Ukraine’s interim Prime Minister Arseniy Yatsenyuk, in Brussels for the summit, said Russia was continuing to stir up trouble.

"We ask Russia to respond whether they are ready to preserves peace and stability in Europe or (whether) they are ready to instigate another provocation and another tension in our bilateral and multilateral relations," Yatsenyuk said.

In Simferopol, Crimea's capital, about 50 people rallied outside the local parliament Thursday morning waving Russian and Crimean flags. Among the posters they held was one that said "Russia, defend us from genocide."

In the eastern Ukrainian city of Donetsk, police on Thursday removed pro-Moscow protesters from the regional government’s building and took down a Russian flag that had been flying over it. More than 70 people were taken into custody for questioning and a protest leader in the city, Pavel Gubarev, was arrested in his apartment, according to the BBC.

Donetsk city police chief Maksim Kirindyasov said the protesters – who had occupied the building since Monday – did not resist removal and were “cleared in a matter of a few minutes,” Reuters reports.

Late Wednesday, Aksyonov told the Associated Press that 11,000 self-defense troops, all or most of whom are believed to be Russian, had joined with riot police and security forces to control all access to the strategic peninsula and had blockaded all Ukrainian military bases that have not yet surrendered. Aksyonov also said that his government was in regular contact with Russian officials. Putin, Foreign Minister Sergey Lavrov and Defense Minister Sergey Shoygu have all denied sending troops into the region.