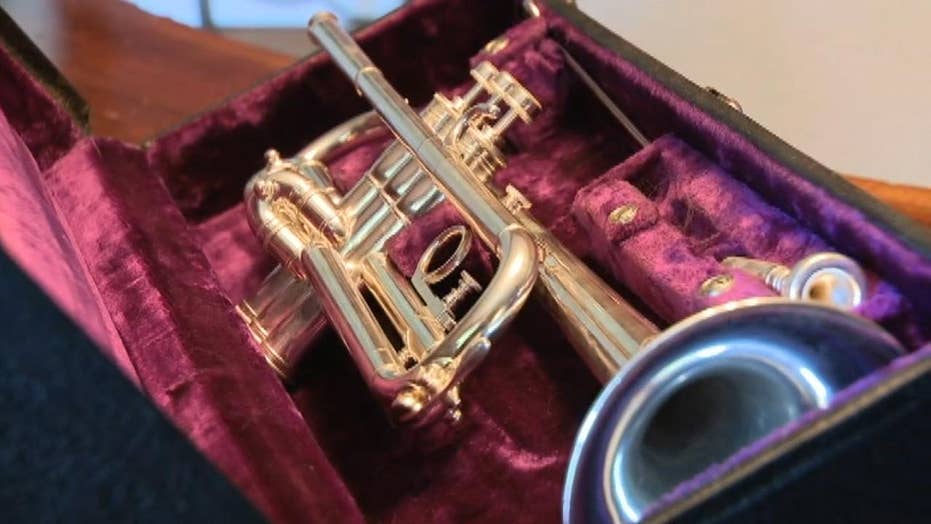 A trumpet that belonged to U.S. Army Sgt. Richard Wank, who stormed the beach at Normandy and never let the instrument leave his side, returns to celebrate the 75th anniversary of D-Day.

When U.S. Army Sgt. Richard Wank leaped off a Higgins boat just yards from Omaha Beach on June 6, 1944, his grip never let go of the trumpet in his hand as bullets rained down around him.

As he reached shore, Wank was shot down by enemy fire and was found alive two days later by medics. He was still clutching the instrument.

“What they experienced was on a whole other level,” his grandson, Jeff Wank, told Fox 4 News, adding that his family never knew of the story until his grandfather’s death in 2007. “He would never say anything about it. He would never talk about it. The only he would ever say is, ‘It should have been me.’”

That trumpet that the Sgt. Wank never lost a hold off returned to Normandy on Thursday for the first time since that fateful day 75 years ago. He was awarded the Silver Star for his service during World War II.

Jeff Wank said he wanted to get the trumpet restored so that he could make sure its legacy was preserved. He gave it to David Anderson, a local Dallas instrument restorer.

“He really didn't want to let it go. He told me as soon as he left... he sent a text that said, ‘I cannot believe I just let you leave with that instrument,’” Anderson told Fox 4 News.

The brass instrument had a lot of dents, cracks in some of the pipes and some things missing and it took about seven weeks to restore – an experience Anderson will never forget.

“Even though it’s been restored, you can still see where he held his hands, just like a firearm or something that’s used a lot and held by someone a lot,” he said. “I was blown away. Just working on it was a real honor and mind-blowing experience.”

D-DAY VETERAN, 99, GETS OVATIONS FROM THE QUEEN AND TRUMP AS HE LEADS TRIBUTES

While restoring the instrument, Anderson remembered that the University of Texas Alumni Band would be performing in Normandy for the 75th anniversary of the D-Day landing.

Kenny Bierschenk, a member of the UT Alumni Band, was chosen to play the instrument Thursday. He chose to perform Taps.

“As a musician, we often think of music as spanning the centuries. Taps being sounded at all these military events, it’s the same now as it was back in World War II. It’s the same as it was in the Civil War,” he said. “To be able to play Taps on a bugle or on a trumpet that was actually used to do that very same thing 75 years ago when it was still a battle zone, that’s really meaningful to me.”

The solemn song, Jeff Wank said, is probably the reason why his grandfather took the trumpet with him that fateful day. He believes it’s likely the only song he played after being rescued.

“And I think he played Taps for his friends,” he said. “And that’s why he brought it over there. I’m convinced of that. He knew there were a lot of people that would not return.”

D-DAY VETERAN, 93, JOKINGLY FILTS WITH MELANIA IN FRONT OF TRUMP

On Thursday, the band played D-Day commemoration ceremony presided by President Trump and French President Emmanuelle Macron, including Taps while the two world leaders overlooked Omaha Beach. They have scheduled several other performances around France, including at the Normandy American Cemetery at Omaha Beach and at the Champs de Mars in Paris.

D-Day was the largest invasion - by both air and sea - in history. On June 6, 1944, 160,00 Allied troops carried by 7,000 boats landed on the beaches code-named Omaha, Utah, Juno, Sword, and Gold. Nearly 7,000 Allies troops died and 5,000 injured. The invasion triggered the end of the Nazi regime as Allied troops would advance their fight, take Paris and race against the Soviets to control as much German territory as possible by the time Adolf Hitler committed suicide in a Berlin bunk in May 1945.