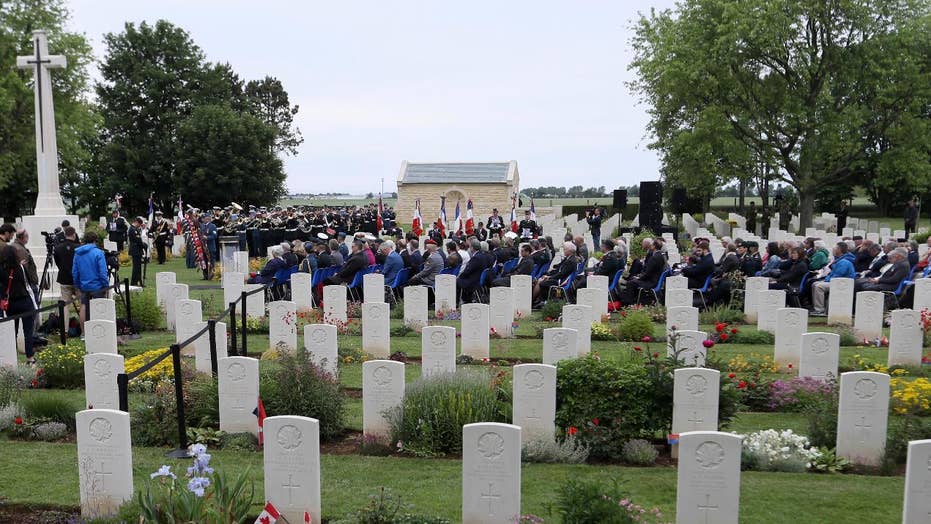 A 99-year-old D-Day veteran got a standing ovation from Donald Trump and the Queen Wednesday as he led the nation's tributes to brave troops who stormed the Normandy beaches 75 years ago.

As he walked on to the stage, the entire crowd - including the Queen, Prince Charles, Donald Trump and Theresa May - rose to honor him.

D-Day veteran John Jenkins on stage during commemorations for the 75th Anniversary of the D-Day landings, in Portsmouth, England, Wednesday June 5, 2019. (PA via AP)

Mr Jenkins was a 24-year-old platoon sergeant in the Pioneer Corps when he landed in Normandy on June 8, 1944.

He was deployed on Gold Beach, one of the five landing points on the French coast where Allied troops launched their operations.

Mr Jenkins, from Portsmouth, told the crowd: "I was terrified. I think everyone was - you don't show it, but it's there.

"I look back on it as a big part of my life, it changed me in a way - but I was just a small part in a very big machine.

"You never forget your comrades because we were all in there together."

The veteran concluded: "It's right that the courage and sacrifice of so many veterans is being honored 75 years on.

"We must never forget - thank you."