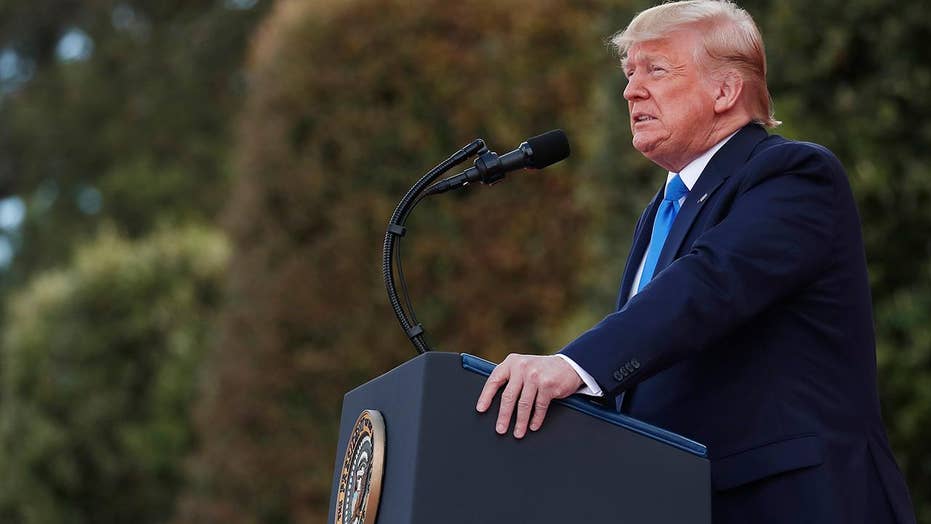 President Trump paid stirring homage Thursday to the brave Allied fighters who "stood in the fires of hell" to help turn the tide of World War II, speaking at the edge of Omaha Beach in Normandy, France, where thousands of men stormed the shore 75 years ago in a relentless onslaught that was both a suicide mission and a historic triumph of good over evil.

The speech, in which Trump and the first lady joined leaders from Britain, Canada, France - and Germany - to pay homage to the troops who turned the tide of the war, capped a somber day and a string of events commemorating the legendary battle in which Allied soldiers and sailors overcame impossible odds and made unimaginable sacrifices.

“Today we remember those who fell and we honor all who fought right here in Normandy. They won back this ground for civilization," Trump said.

“To more than one hundred and seventy veterans of the Second World War who join us today – you are among the very greatest Americans who will ever live," he added. "You are the pride of our nation. You are the glory of our republic. And we thank you from the bottom of our hearts.”

U.S. President Donald Trump talks to a U.S War veteran during a ceremony to mark the 75th anniversary of D-Day at the Normandy American Cemetery in Colleville-sur-Mer, Normandy, France, on Thursday. (AP)

Trump, who was joined by French President Emmanuel Macron, lauded the courage of Allied soldiers and recounted stories of heroism from the epic battle, in which 4,414 Allied troops – including 2,501 Americans - were killed. One of the U.S. veterans who attended the ceremony, Ray Lambert, was a 23-year-old medic at the time and would go on to win three Purple Hearts and write a book, "Every Man a Hero," about his role in the event.

“In defeating that evil, they left a legacy that will last forever,” Trump said, concluding the somber speech. “To the men who sit behind me, your example will never grow old. Your legend will never die. The blood that they spilled, the tears that they shed, the lives that they gave, the sacrifice that they made, did not just win a battle, it did not just win a war… they won the survival of our civilization.

Udo Hartung from Frankfurt, Germany, a World War II reenactor, holds the U.S. flag as he stands at dawn on Omaha Beach, in Normandy, France on Thursday. (AP)

“May God bless our great veterans. May God bless our Allies. May God bless the heroes of D-Day. And may God Bless America.”French President Emmanuel Macron spoke before Trump, to the sound of wartime American songs and military music. He addressed the crowd in French, paying a heartfelt tribute to the American and Allied soldiers who helped liberate France.

Macron, who spoke before Trump, told the audience: "Today France has not forgotten to those who we owe our right to freedom."

Macron then switched to English, addressing the veterans in the audience: “We know what we owe to you veterans. Our freedom. On behalf of my nation, I just want to say, thank you.”

Floral tributes are placed at the National Guard Monument Memorial as members of the United States Army Europe Band and Chorus play in the background near Omaha Beach, in Normandy, France, on Thursday. (AP)

In a Twitter message early Thursday, President Trump seemed to be looking forward to the day's events.

"Heading over to Normandy to celebrate some of the bravest that ever lived. We are eternally grateful!" the president wrote.

The message included a Defense Department video featuring remembrances of some veterans who participated in the D-Day invasion.

French President Emmanuel Macron, right, greets veterans during a ceremony to mark the 75th anniversary of D-Day at the Normandy American Cemetery in Colleville-sur-Mer, Normandy, France, on Thursday. (AP)

Earlier, the president tweeted an excerpt from his D-Day remarks.

Remembrances will continue to take place throughout the day. Trump will deliver a speech later Thursday at the Normandy American Cemetery and Memorial, where more than 9,000 American military dead are buried.

Sgt. Eugene Deibler, who was 19 years old when he landed in France on D-Day as a paratrooper with the 101st Airborne Division, told Fox News on Wednesday that those in the graves are the "heroes" of the invasion.

A ceremony also was held Thursday at the Bayeux War Cemetery to commemorate the British sacrifices on D-Day.

Veterans and dignitaries including British Prime Minister Theresa May sang hymns and heard prayers amid the neat rows of gravestones where more than 4,000 British and Commonwealth troops — and several hundred German soldiers — are buried.

A spectator shakes the hand of a British veteran who is part of a procession leaving the Bayeux Cathedral after a ceremony to mark the 75th anniversary of D-Day in Bayeux, Normandy, on Thursday. (AP)

Frank Baugh, a 95-year-old Royal Navy veteran who helped ferry 200 British troops across the Channel on D-Day to Sword Beach, told the congregation that "my most abiding memory of that day is of seeing our boys — we'd been talking to them minutes before — cut down with machine-gun fire."

"We couldn't get them out, we couldn't help them. That is my most abiding memory, and I can't forget it."

On Wednesday, Trump joined May and about 300 veterans – ages 91 to 101 – on the southern coast of England where he read a prayer delivered by President Franklin Roosevelt on D-Day.

President Donald Trump participates in a ceremony to commemorate the 75th anniversary of D-Day.  (AP)

When the day was over, nearly 7,000 Allied troops were dead and 5,000 were injured. That summer, Allied troops would advance their fight, take Paris, and race against the Soviets to control as much German territory as possible by the time Hitler committed suicide in a Berlin bunker in May 1945.

Only 30 of the 73,000 U.S. troops who participated in D-Day are reported to be in France today for the anniversary events. The U.S. Department of Veterans Affairs estimated in late April that there are around 500,000 American World War II veterans still living in the U.S., but 348 pass away each day.