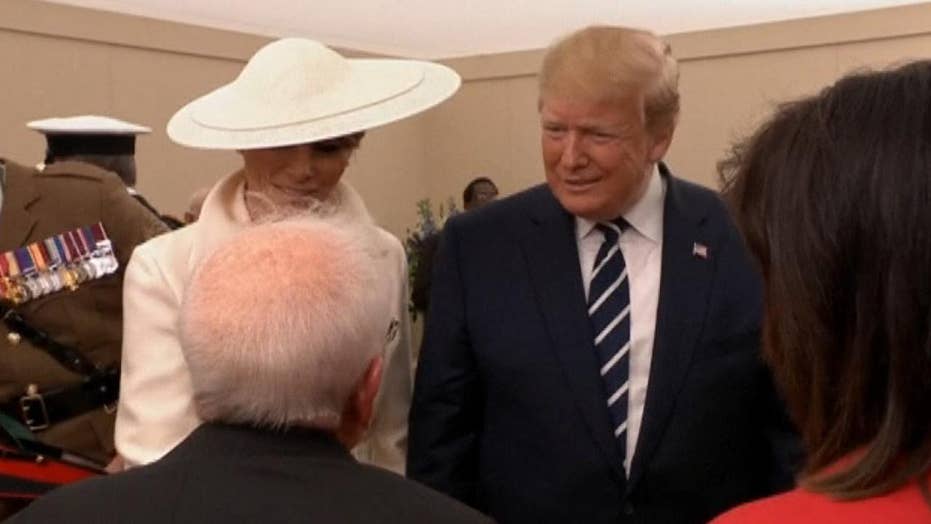 President Trump jokes with D-Day veteran who flirted with Melania

Raw video: President Trump jokes that WWII veteran who flirted with first lady Melania Trump 'could handle it' at D-Day anniversary event in the U.K.

Donald Trump joked "he can handle it" as a 93-year-old D-Day veteran flirted with US First Lady Melania today.

Thomas Cuthbert laughed, "if I was 20 years younger" as he shook 49-year-old Melania's hand - right in front of President Trump, 72.

Trump added: "It's my honor, believe me, thank you very much."

He added: "He surprised me, when you see someone on the TV but he seemed different, he seemed one of the boys.

Melania Trump and US President Donald Trump meet veteran Thomas Cuthbert during commemorations for the 75th Anniversary of the D-Day landings at Southsea Common, Portsmouth. (PA via Getty)

"His wife was very pleasant as well."

The joke came at the end of an hour-long D-Day ceremony to remember the historic moment hundreds of thousands of troops stormed the beaches in World War Two.

D-DAY VETERAN, 97, PARACHUTES INTO NORMANDY 75 YEARS LATER: 'I'D GO UP AND DO IT ALL AGAIN'

President Trump performed a reading at the ceremony, which also featured a series of poems, dramatizations, songs and speeches.