'We don't want you': Man heckles British Prime Minister Theresa May during speech in Wales

Embattled British Prime Minister Theresa May was heckled by her own party Friday, the morning after a shellacking in local elections that saw her Conservative Party suffer heavy losses amid an ongoing impasse over Britain's departure from the European Union.

“Why don’t you resign,” a man in the audience of the Welsh Conservative Party’s Spring Conference yelled as May took the stage. “We don’t want you.”

A handful of other members yelled “get out, sir” but that didn't gather too much momentum from those gathered to hear the prime minister.

As ballots were still being counted Friday afternoon, the Tories had lost more than 900 seats, according to a live BBC count. While they may still remain the biggest party in local government overall, with more than 2,000 seats, it would be a significant gutting of their majority and end their control of a significant number of local councils.

The opposition Labour Party had lost more than 100, while the anti-Brexit Liberal Democrats had so far gained more than 500 seats. Other smaller parties and independent candidates picked up more than 400 seats

While local elections are supposed to be fought on local issues, they are often a referendum on the performance of the sitting government in Westminster. Brexit is currently looming over everything, and the result is likely to be seen as a damning indictment on lawmakers’ inability to get Britain out of the E.U. nearly two years after Brits voted to leave in 2016.

May has tried repeatedly to get her withdrawal agreement, negotiated with the E.U. last year, through Parliament. But it has been overwhelmingly voted down three times, leaving May to negotiate a delay until October 31 as she reached out to opposition parties to come to a compromise and muster support for some form of agreement. 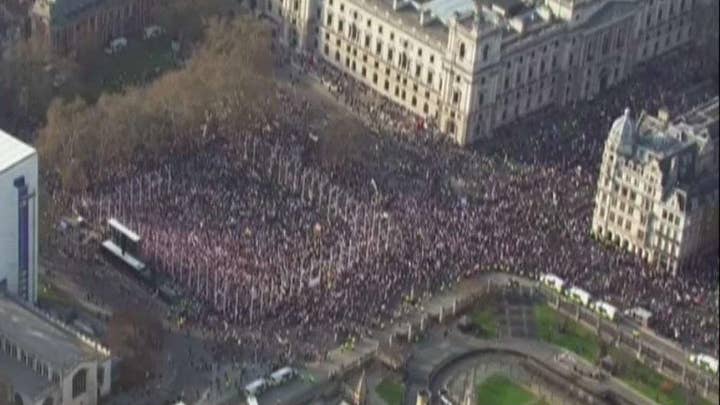 Labour Party Shadow Chancellor John McDonnell indicated Friday that the elections may give those talks more impetus, saying that message from the elections was: “Brexit - sort it.”

The result bodes particularly poorly for May’s party ahead of the upcoming European Parliament elections later this month, that the U.K. was not due to participate in until the government agreed to a delay.

Polls for the European elections suggest that the newly formed Brexit Party, led by former U.K. Independence Party leader and Fox News contributor Nigel Farage, is set to make significant gains at the Tories’ expense and could even emerge as the biggest party overall.

Additionally, polls for any general election called this year suggest that Labour Party leader Jeremy Corbyn could end up replacing May as Prime Minister -- who was once written off by many commentators as unelectable due to his extreme left-wing positions, until his party significantly cut the Tory majority in Parliament in the 2017 general election.

Daniel Hannan, a pro-Brexit Conservative MEP, wrote this week that May must stand down before the European elections to avoid the party taking a “hell of a beating.”

The result comes amid a rough week for May, in which she sacked Gavin Williamson, the defense secretary for allegedly leaking details about a possible arrangement with Chinese telecoms giant Huawei to the media.