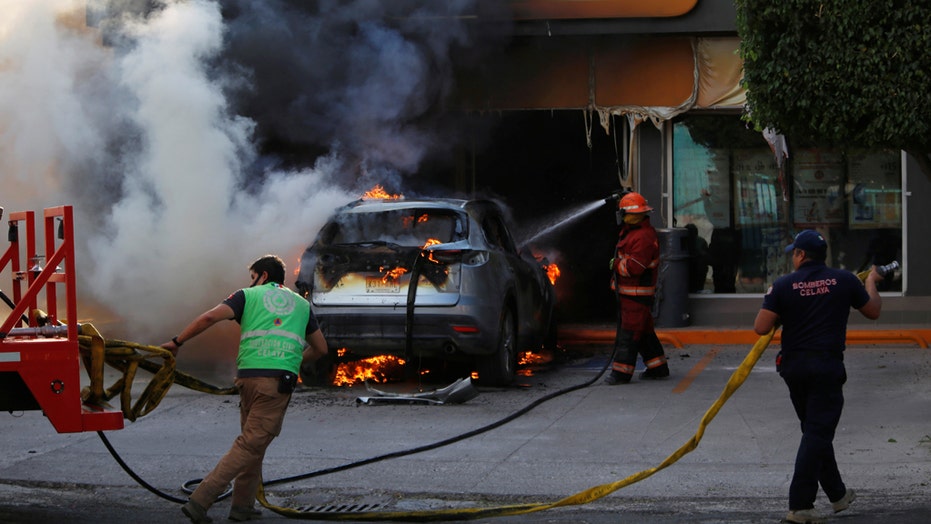 A violent Mexican cartel leader fought back tears as he vowed “to blow up" the government in retaliation for detaining his mother over the weekend.

“I’m going to be a stone in your shoe. I’m going to blow up, you will see,” says Yepez in the video, according to Reuters. He is seen wearing jeans with a rifle slung over his shoulder.

Firefighters work on a burning car outside a store after an operation by security forces against organized crime in Celaya, in Guanajuato state, Mexico June 20, 2020. (Reuters)

Violent clashes took place over the weekend in the city of Celaya in the Mexican state of Guanajuato as forces loyal to Yepez battled with forces from the Mexican government, the BBC reported.

Twenty-six people were arrested, including the mother, sister and a cousin of Yepez, according to the BBC.

The Santa Rosa de Lima Cartel is mainly dedicated to stealing petroleum from state-run oil company Pemex at an industrial scale, according to Reuters.

In the video Yepez says he feared the authorities would frame his mother as one of the leaders of the cartel, Reuters reported.