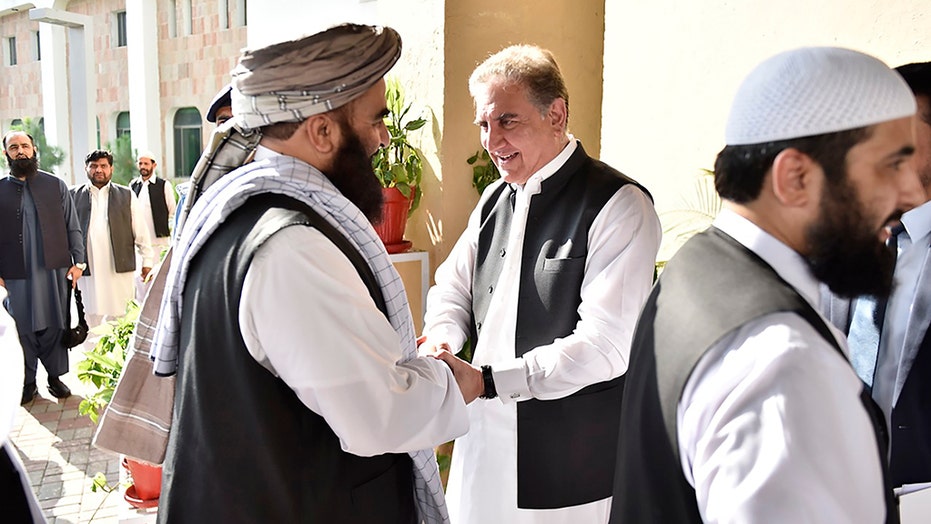 The Taliban met with U.S. envoy Zalmay Khalilzad in Pakistan on Friday in the first such meeting since President Trump declared Afghan peace talks “dead,” according to reports.

Khalilzad and Taliban officials met in Islamabad but the U.S. has said peace talks have not resumed, the Associated Press reported.

Trump decided to cancel the peace negotiations with the Taliban came amid reports of a seemingly imminent peace deal. He called them off following a deadly Taliban bombing in Kabul that killed a U.S. soldier

The president’s decision scrapped a secret Camp David meeting he intended to hold with a Taliban representative just before the anniversary of the Sept. 11, 2001 terror attacks.

In this photo released by the Foreign Office, Pakistan's Foreign Minister Shah Mehmood Qureshi, center, receives members of Taliban delegation at the Foreign Office in Islamabad, Pakistan, Thursday, Oct. 3, 2019. Senior Taliban leaders are meeting with Qureshi in Islamabad as part of a push to revive an Afghanistan peace deal that has included stops in Russia, China and Iran. (Pakistan Foreign Office via AP)

Reuters reported that the two sides first met in Islamabad on Thursday for an hour.

“The Taliban officials held a meeting with Zalmay Khalilzad ... all I can tell you is that Pakistan played a big role in it to convince them how important it was for the peace process,” a senior Pakistan official told Reuters.

Sediqqi said Taliban meetings in Islamabad or anywhere else will not help the Afghan peace process and in fact, will encourage the Taliban to commit more violence.

The AP reported that the meeting was significant as the United States seeks an exit from Afghanistan's 18-year war.