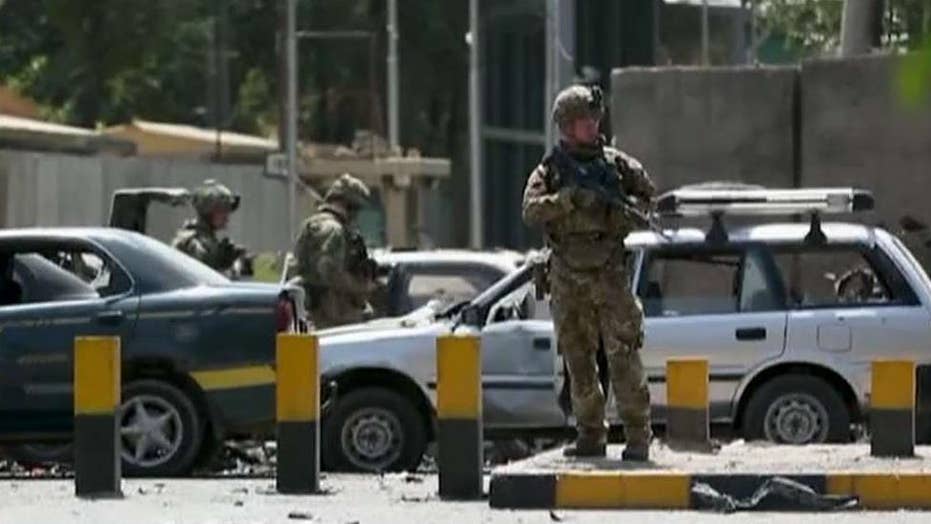 More than 18 years after U.S. forces entered Afghanistan and usurped the Taliban government from power, the country remains a patchwork of progress, pain, and bloodletting.

While the territorial dominance and perpetual attacks orchestrated by the Taliban remains at the forefront of the fragile nation’s woes, the presence of other insurgent groups and blatant threats to U.S. interests also lurk in the periphery.

“Many Taliban commanders, hardliners that did not want to join the peace process. We had intelligence that showed they are going to join ISIS. That threat may increase over a period of time,” Afghan National Security Adviser, Hamdullah Mohib, told Fox News on Tuesday. “For the time being, ISIS is not a strategic threat to us. We have been able to get rid of them in places they have taken hold. But if the peace process goes wrong and doesn’t really integrate all of the Taliban, the hardliners may join ISIS, which is when it will become a strategic threat to us and our international partners.”

Last month, President Trump abruptly canceled the year-long Doha talks after the death of an American soldier in a Taliban-executed bombing, throwing the future of the talks into disarray. Mohib said such a move was the right one and that the only way forward for the insurgent outfit was to sit down with the Kabul government – which they have bluntly refused to do – underscoring that all the progress made by the U.S delegation was not lost.

“Now we are in a very good place to begin real peace negotiations. It was not all a waste. I think there are parts we can salvage,” he said, adding that they are analyzing what prevailed and what can be redeemed for future use.

Hamdullah Mohib, the National Security Adviser of Afghanistan (NSA) who previously served as the Ambassador to the United States. (Courtesy Afghan Unity Government)

But also a cause for concern is the notion not only of Taliban members aligning with ISIS, but they are also merging with Al Qaeda more than eight years since the death of its leader in a Navy SEAL raid.

President Trump also last month confirmed that Hamza bin Laden, the son of Usama bin Laden and an emerging Al Qaeda leader, had been killed in a U.S. counterterrorism operation. While the time and place of his death have not been confirmed, Mohib indicated it was “probably Pakistan” and marks an important feat in the fight against terrorism.

“Leadership matters in all of this. Symbolic leadership matters,” he stressed. “But there is a blurred line between Al Qaeda and the Taliban now. They have been inter-marrying, they work together, their ideologies have merged. There is very little difference between the Taliban and Al Qaeda today.”

One of the primary negotiation points between the U.S and the Taliban in the now-shuttered U.S-led peace process was that the Taliban was not to provide safe harbor to such groups that pose international security threats and threats to the U.S. homeland.

Yet in the face of a volatile security situation, incessant Taliban threats and widespread concerns of corruption and voter fraud, Afghanistan held its presidential elections on Saturday. Both front-runners – incumbent President Ashraf Ghani and his opponent, Chief Executive Abdullah Abdullah – were quick to claim victory. But the tabulated outcome will not be known for weeks.

“There cannot be fraud. There are multiple layers of verification. Everyone brings ID cars, and they are added to a list specific to a polling center. When you arrive, they check your sticker that it correlates with the name. Then there are fingerprints, and they take your picture and a picture of your ID card so you can’t be a ghost voter,” Mohib explained. “(All ballots) must arrive in Kabul before the electoral commission can even start counting.”

A preliminary result is expected around October 19, with a final tally announced on November 7. The clear winner – of 13 candidates – must take more than 50 percent of the vote. Otherwise, the election will move to a runoff.

It marked the fourth time the country has gone to the polls to elect a president since the post-9/11 occupation, and according to Mohib, the most significant.

An Afghan woman shows her inked finger after casting her vote at a polling station in Kabul, Afghanistan, Saturday, Sept. 28, 2019. Afghans headed to the polls on Saturday to elect a new president amid high security and threats of violence from Taliban militants, who warned citizens to stay away from polling stations or risk being hurt. (AP Photo/Ebrahim Noroozi)

But the biggest victory of all was the apparent thwarting of hundreds of large-scale attacks.

“The Taliban said they would blow up polling stations and there will be civilian casualties. Fourteen suicide attacks were prevented on the night before the elections alone,” Mohib noted. “On the day, (they) tried to launch 273 attacks, some did result in casualties in the case of security forces, but no civilians were harmed. I’m very proud of our security forces of being able to manage such a high-level of threats.”

“We wanted to make sure the elections happened, and security was good, we focused on that and delivered on that,” Mohib asserted.

Precise turnout numbers are unclear following reports that the Taliban sabotaged telecommunication towers in remote hamlets on Saturday in an attempt to hinder the process. However, early estimates pin turnout to just 2.5 million out of an eligible 9 million – a historic low in a country of some 35 million.

And what comes next in Afghanistan – a country that for decades has endured endless invasions, conflicts, rises and falls – is a game of guesses, hopes, and prayers.

“We have re-created our country out of the rubble in the last 20 years. There was literally nothing there. The man-made infrastructure was destroyed. We had no telephones left; there was no electricity, no hospitals, no schools. It became a ghost town,” he added. “Now Kabul looks like any other capital. People are connected, culturally sophisticated, tech-savvy. That is the biggest progress in the world, and we have the U.S. to thank for that.”