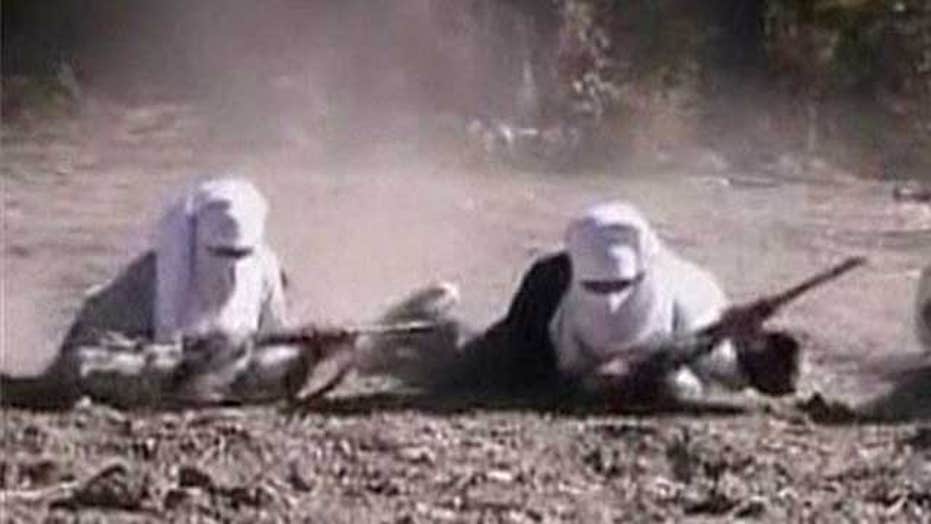 Suicide attackers detonated a car bomb and battled security forces outside Afghanistan's presidential palace Tuesday, killing three security guards and injuring another, in what the Taliban says was an assault directed at the palace, a CIA base and the Afghanistan Ministry of Defense.

The attack happened as reporters were gathering for a news event Tuesday on Afghan youth at which President Hamid Karzai was expected to talk about ongoing efforts to open peace talks with the militant group.

The palace is in a large fortified area of downtown Kabul that also includes the U.S. Embassy and the headquarters for the NATO-led coalition forces. Access there is heavily restricted. Some Kabul residents initially thought the gunfire was a coup attempt because the idea of a Taliban attack within the security zone seemed so unlikely.

The palace houses Karzai's residence, but it was not immediately clear whether the president was in the building at the time and his spokesman did not answer his phone.

Karzai later said in a statement that the attack showed the Taliban "are against peace, stability and progress in Afghanistan." He added: "The Taliban should give answers to the Afghan people."

The attack began around 6:30 a.m. local time when militants with false papers and military-style uniforms bluffed their way through two checkpoints on their way to the palace before jumping out of their explosives-packed vehicle and opening fire on security personnel.

While one carload of Taliban fighters dressed in camouflage emerged from their black Land Cruiser and started shooting, another got stuck between the two checkpoints and detonated their explosives-laden vehicle.

Gunfire erupted next to the Afghan Ministry of Defense and the former Ariana Hotel, which former U.S. intelligence officials have confirmed is used by the CIA.

Taliban spokesman Zabihullah Mujahid said in a text message the militants had "brought death to the enemy," and that all eight attackers had died. The Interior Ministry said three security guards were killed and another wounded.

Mujahid also claimed "a number of foreign invaders were killed and wounded in the attack."

Smoke could be seen coming from the area of the hotel, but there was no immediate indication any of the buildings were hit in the attack and Afghanistan's Kabul division army commander, Gen. Kadam Shah Shahim, said he knew of no deaths among security forces or civilians.

The NATO-led coalition in Afghanistan instituted a camp lockdown during the incident and said in a short statement that its forces had been ready to assist but were not called in by Afghan authorities. The U.S. Embassy canceled all consular appointments and advised American citizens in Kabul to stay indoors.

U.S. Ambassador James Cunningham urged an end to the violence.

"All of the attackers were killed, without success in achieving their goals -- this again demonstrates the futility of the Taliban's efforts to use violence and terror to achieve their aims," he said in a statement. "We again call on the Taliban to come to the table to talk to the Afghanistan government about peace and reconciliation."

The Taliban have indicated they are willing to open peace talks with the U.S. and the Afghanistan government and just last week opened an office in Qatar for possible negotiations.

But at the same time they have not renounced violence and attacks have continued across Afghanistan.

In the southern province of Kandahar, a minibus hit a bomb buried in the road, killing 11 members of a groom's family on their way to an engagement party, said Kandahar governor's spokesman Ahmad Jawed Faisal. Faisal said the dead included eight women, two children and a man, and two other men were wounded.

In Oruzgan, the province north of Kandahar, provincial governor's spokesman Abdullah Hemat said Tuesday that six Afghan national police were killed the day before when their patrol was attacked with a roadside bomb.

And a NATO convoy was hit with a roadside bomb in the province Ghazni, southwest of Kabul, destroying a vehicle but the coalition said there were no casualties.