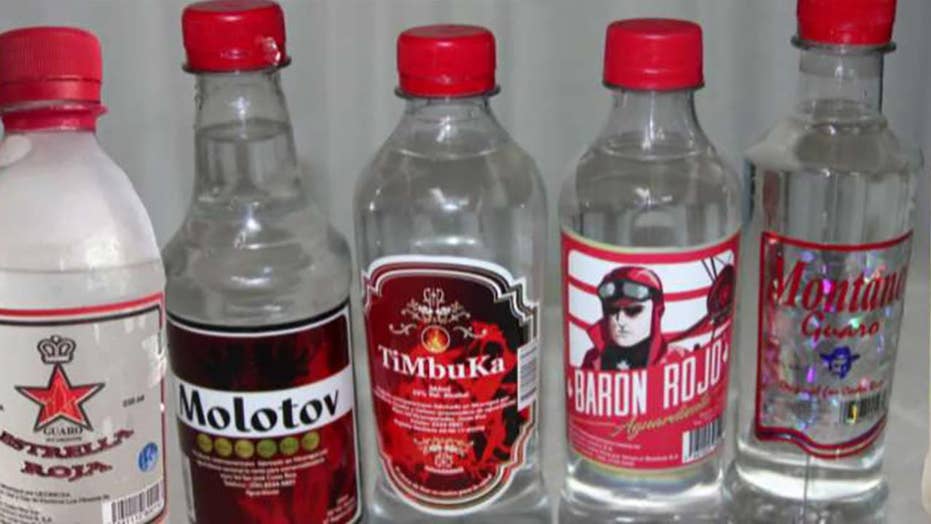 Dr. Devi Nampiaparampil weighs in on the situation in Costa Rica.

At least 19 people have died since early June after drinking alcohol tainted with methanol in Costa Rica, prompting a national alert and widening the focus on the problem of bootleg liquor in Latin America.

The Costa Rican Health Ministry said in a preliminary report on Friday it counted 14 men and five women, ranging in age from 32 to 72, who've died after drinking adulterated liquor.

"The Ministry of Health continues to carry out operations throughout the national territory in order to reduce the exposure of consumers to adulterated products," the ministry said.

Six of the deaths were reported in San José, one in Heredia, four in Cartago, two in Guanacaste and one in Limón, according to the health department, which added three of the fatalities are still under investigation.

At least 19 people have died after drinking alcohol tainted with methanol in Costa Rica, according to officials. (Costa Rican Health Ministry)

Government officials have so far seized around 30,000 bottles from brands suspected of containing methanol, with names includintg "Aguardiente Molotov" and "Guaro Gran Apache." Aguardiente translates to English as "fire water." Both it and guaro are traditionally distilled from sugar cane.

According to the World Health Organization, a trace amount of methanol is common in fermented drinks, but, in large quantities, it can make someone very sick. Dr. Devi Nampiaparampil, an associate professor at the New York University School of Medicine, told "FOX & Friends First" on Monday that methanol is typically used in wiper fluid to clean windshields and solids.

"The problem with methanol is that it's so much more dangerous than alcohol," she said. "It can make you blind, it can damage your kidneys and you might not even realize this at first and then you can die."

Nampiaparampil said just 30 milliliters -- about two-thirds of a shot glass -- is enough to cause permanent blindness.

"That's the danger," she told "FOX & Friends First" "Let's say you drink too much alcohol, you might know pretty much in a couple hours that you're sick. Methanol you might not realize it right away, it can happen days later."

About 30,000 bottles of alcohol have been confiscated in Costa Rica after 19 die from toxic levels of methanol.

Nampiaparampil said issues develop when the liver tries to get rid of methanol and converts it into something "that is more dangerous."

"So you can have headache, abdominal pain, all these things but unless you thought you had some other issues you might just think you're sick, you're on vacation or you ate something wrong," she said.

"Most likely this is related to some type of manufacturing error, that when they were trying to make ethanol they accidentally made some methanol," Nampiaparampil said. "So that can happen in some counterfeit liquors."

Donald Corella, head of emergency services at Calderon Guardia Hospital in San Jose, who was quoted in the Argentine daily newspaper La Nacion as saying some of the alcohol tested contained between 30 to 50 percent methanol.

Corella added that while four people at the hospital survived, they sustained "very serious after-effects" ranging from irreversible total blindness to brain lesions that cause tremors similar to Parkinson's disease.

President Carlos Alvarado said on Twitter he “deeply regrets” the lives that have been lost and has instructed the Health Ministry and other authorities to collect “all possible data” in order to determine who is responsible.

Bootleg liquor has recently come under the microscope after the deaths of several Americans either during or soon after their stays at resorts in the Dominican Republic and establishments in Mexico.