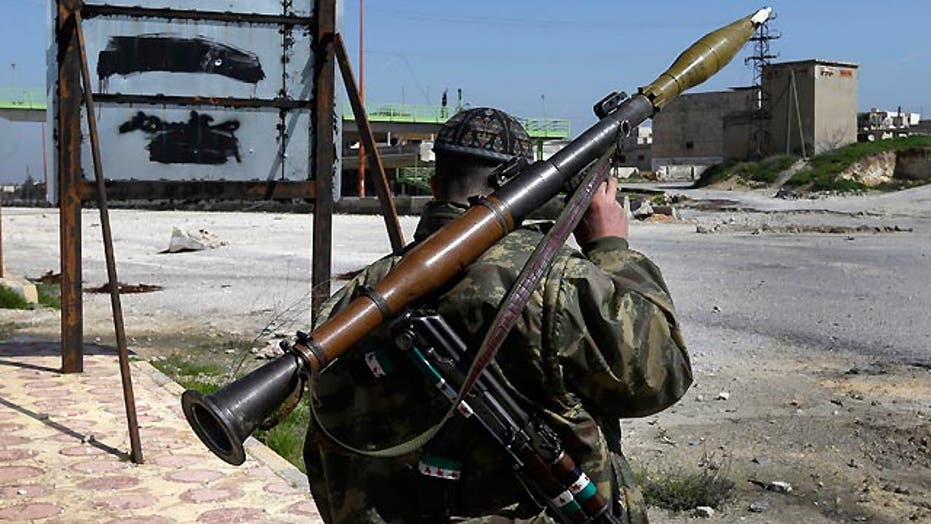 BEIRUT – The head of Syria's rebels said Friday that the food and medical supplies the United States plans to give his fighters for the first time won't bring them any closer to defeating President Bashar Assad's forces in the country's civil war.

"We don't want food and drink, and we don't want bandages. When we're wounded, we want to die. The only thing we want is weapons," Gen. Salim Idris, chief of staff of the opposition's Supreme Military Council, told The Associated Press by telephone.

The former brigadier in Assad's army warned that the world's failure to provide heavier arms is only prolonging the nearly 2-year-old uprising that has killed an estimated 70,000 people.

In what was described as a significant policy shift, the Obama administration said Thursday it was giving an additional $60 million in assistance to Syria's political opposition and said it would, for the first time, provide non-lethal aid directly to rebels battling to topple Assad.

The move was announced by U.S. Secretary of State John Kerry at an international conference on Syria in Rome. In the coming days, several European nations are expected to take similar steps in working with the military wing of the opposition to increase pressure on Assad to step down and pave the way for a democratic transition.

But the frustration expressed by Idris is shared by most of his colleagues in the Syrian opposition, as well as by scores of rebels fighting in Syria. They feel abandoned by the outside world while the Assad regime pounds them with artillery and bombs.

The main rebel units, known together as the Free Syrian Army, regrouped in December under a unified, Western-backed command headed by Idris and called the Supreme Military Council, following promises of more military assistance once a central council was in place. Despite those pledges, opposition members say very little has been delivered in terms of financial aid, and more importantly, in weapons and ammunition.

The international community remains reluctant to send weapons, fearing they may fall into the hands of extremists increasingly gaining ground among the rebels.

Mouaz al-Khatib, the leader of the Syrian opposition coalition, has lamented the West's focus on the presence of Islamic militants among the fighters. In a forceful speech Thursday to the Rome conference, he said the media reports give "more attention to the length of fighters' beards than to the (regime's) massacres."

Some Syrians expressed their disappointment on social media websites. One showed a photo of Kerry carrying a toy gun as a gift for the rebels. Another depicted a three-wheeled cart, of the kind usually used by farmers, with the words: "The first of the nonlethal weapons has arrived."

Idris, a 55-year-old who studied in Germany and taught electronics at a Syrian military college before defecting in July, said the modest package of aid — consisting of an undetermined amount of food rations and medical supplies — will not help them win against Assad's forces who regularly use warplanes to pound rebel strongholds.

"We need anti-tank and anti-aircraft missiles to stop Bashar Assad's criminal, murderous regime from annihilating the Syrian people," he said. "The whole world knows what we need, and yet they watch as the Syrian people are slaughtered."

Still, he said he hoped that the promised aid is delivered, which would provide some relief to the civilians caught in the fighting.

Russia is a close ally of Syria that has continued to supply arms to Assad's regime as well as shielding the country from U.N. Security Council sanctions.

Idris denied media reports that the rebels have recently received arms shipments and said his troops were suffering from "severe shortages" in weapons and ammunitions.

Croatia's president said Friday his country will withdraw about 100 peacekeeping troops from the Syria-Israel border after reports that Syrian rebels have been armed with Croatian weapons. The Croatian government fears its troops could become targets for Syrian government soldiers fighting the rebels.

Croatian officials have also denied reports by local media and The New York Times that arms, including machine guns, rifles and anti-tank grenades used in the Balkan wars in the 1990s have recently been sent to the Syrian rebels.

Croatian Prime Minister Zoran Milanovic said despite the official denials, "everyone has read those reports, and our soldiers are no longer safe."

Rebels backed by captured tanks have been trying to storm the police academy outside the city since launching a new offensive last week. Activists say the academy, which has become a key front in the fight for Aleppo, has been turned into a military base used to shell rebel-held neighborhoods in the city and surrounding countryside.

The Britain-based Syrian Observatory for Human Rights activist group also reported heavy fighting around the school and said there were several rebel casualties.

There were conflicting reports about whether the rebels had managed to force regime troops out of the mosque and take full control of the holy site.

Mohammed al-Khatib of the Aleppo Media Center activist group said the mosque was in rebel hands, although clashes were still raging.

"The regime forces left lots of ammunition in it (the mosque), with guns and rocket-propelled grenades," he said via Skype.

Observatory director Rami Abdul-Rahman said rebels have been in control of at least half of the mosque complex for days, but he could not confirm that they had captured all of it.

Near the capital of Damascus, activists said the bodies of 10 men — most of them shot in the head — were found dumped on the side of a road between the suburbs of Adra and Dumair. Such incidents have become a frequent occurrence in the civil war.