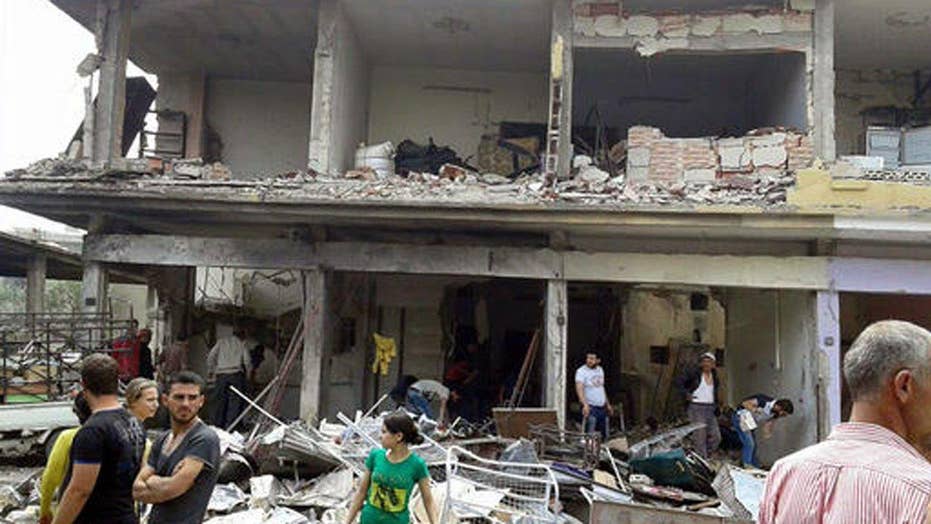 Airstrikes on rebel-held districts of Syria's contested city of Aleppo on Wednesday, including one that struck near a hospital, killed 15 civilians and wounded many others, as fighting in the country's largest city intensified once again, opposition activists said.

The northern city has seen an uptick in violence in the last two days, with government forces pounding rebel-held eastern parts of the city with airstrikes while rebels are shelling western, government-held districts.

The activists said one of Wednesday's strikes hit near the Bayan hospital in the rebel-held Shaar neighborhood, killing 10 people. Videos uploaded on the internet by activists show massive destruction, fires and thick black smoke billowing from buildings.

Wounded people are seen being loaded into ambulances. A body covered in thick gray dust is lying face down on a street littered with debris.

The Independent Doctors Association, which describes itself as a cross-border Syrian humanitarian organization providing health care to the province and the city of Aleppo, said on its Twitter account that an airstrike hit a children's hospital it runs, destroying one floor.

Hospitals and medical facilities have been regularly targeted in Syria's civil war, now in its sixth year. Since the start of the conflict in 2011, nearly 740 doctors and staff have been killed in more than 360 attacks on hospitals in Syria, according to Physicians for Human Rights.

Doctors Without Borders, known by its French acronym, MSF, says at least 100 staff members, patients and caretakers were killed, and at least 130 were wounded, in aerial bombing and shelling attacks on more than 80 MSF-supported and run health structures in 2015 and early 2016.

On April 27, an airstrike widely believed to have been carried out by the Syrian government destroyed the al-Quds hospital in Aleppo, killing a pediatrician and dozens of colleagues, patients and other civilians.

Aleppo, once Syria's thriving commercial center, has been divided and subject to a war of attrition between government and opposition forces since the summer of 2012.

North of Aleppo, rebels broke an Islamic State siege on their stronghold of Marea, reopening the road linking the town to the Turkish border, activists said. The Observatory said IS withdrew from several villages near Marea, redeploying fighters to the area west of the IS-held town of Manbij, where the extremists are trying to fend off an advance by Kurdish-led and U.S.-backed forces.