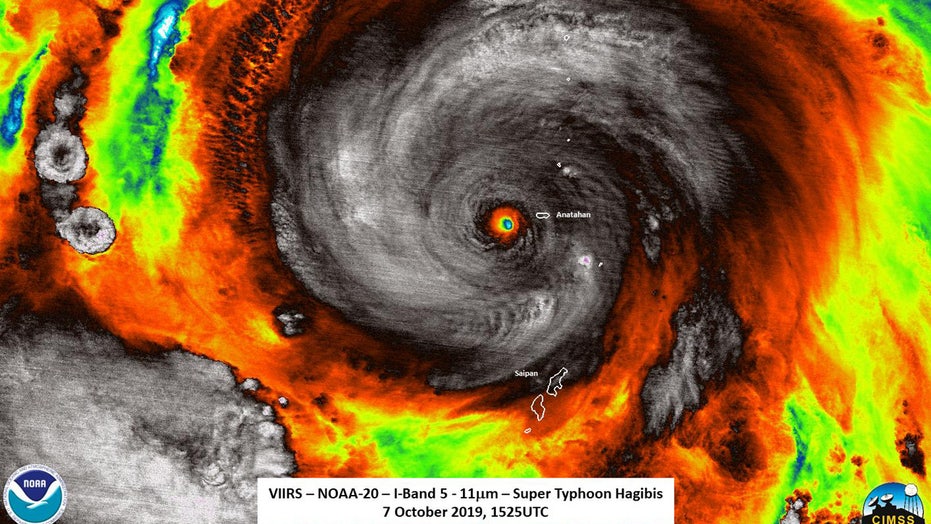 An extremely-dangerous storm in the northwestern Pacific Ocean exploded in intensity early Monday morning, ramping up from a tropical storm to a super typhoon with 160 mph in less than a day as forecasters warn the storm may impact Japan by the weekend.

Super Typhoon Hagibis is located about 400 miles north-northwest of Guam as of Wednesday, moving to the northwest at 13 mph, according to the Joint Typhoon Warning Center. The storm has maximum sustained winds of 155 mph, with gusts up to 189 mph, according to forecasters.

"Hagibis is forecast to maintain this intensity through Wednesday then begin a gradual weakening trend," according to the National Weather Service.

The eye of Hagibis passed over the uninhabited Anatahan Island, about 80 miles north of Saipan, early Tuesday.

A typhoon warning is in effect for Alamagan and Pagan islands in the Commonwealth of the Northern Mariana Islands, where damaging winds of up to 50 mph are forecast through early Wednesday. The agency also issued a tropical storm warning for Agrihan Island.

President Donald Trump declared an emergency for the Commonwealth of the Northern Mariana Islands and ordered the U.S. government to help local authorities respond to a typhoon. The president's declaration authorizes the Federal Emergency Management Agency (FEMA) to coordinate disaster relief efforts.

The storm rapidly intensified over the weekend, growing from a tropical storm to the equivalent of a Category-5 hurricane in the Atlantic in less than a day.

"This is the most intensification by a tropical cyclone in the western North Pacific in 18 hours since Yates in 1996 also intensified by 90 mph in 18 hours," Klotzbach noted.

At its peak with 160 mph winds, Hagibis also became the fourth Category 5 hurricane or typhoon in the Northern Hemisphere this week. The other three storms were Hurricanes Dorian and Lorenzo in the Atlantic, and Super Typhoon Wutip in the western North Pacific, according to Klotzbach.

The JTWC said Hagibis is forecast to make a turn to the north toward Japan, and make a possibly brush near Tokyo by the weekend.

Super Typhoon Hagibis can be seen on Tuesday in this satellite photo. (Joint Typhoon Warning Center)

The storm is forecast to bring heavy rain to the region by Saturday, according to the Japan Times.

The storm's potential arrival comes as two high-profile sporting events are set to take place this weekend in Japan. The Rugby World Cup has six scheduled matches on Saturday and Sunday when the worst of the storm is forecast.

Any games canceled at the World Cup because of the weather are recorded as scoreless draws, according to BBC News.

The Japanese Grand Prix is also scheduled to take place in Suzuka on Sunday afternoon.