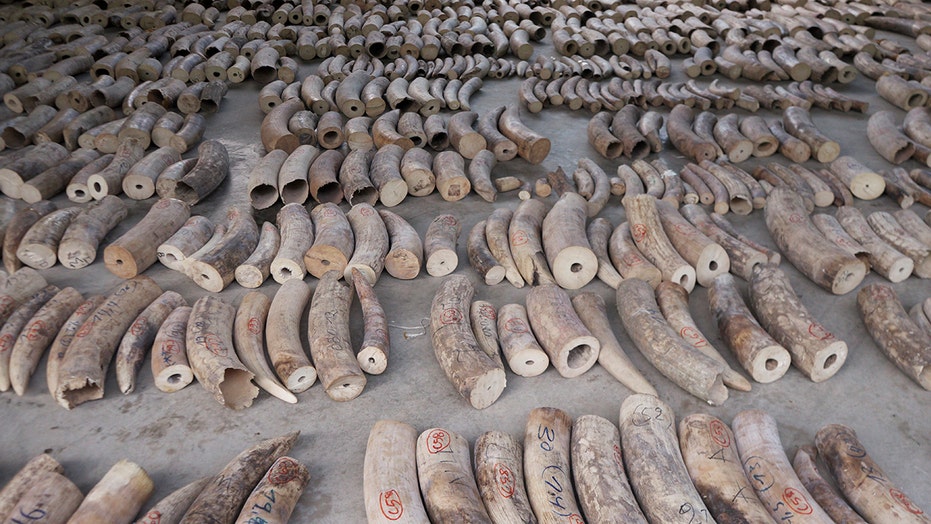 Singapore authorities seized 8.8 tons of smuggled ivory from nearly 300 African elephants in a record $48 million haul over the weekend.

The shipment also contained 11.9 tons of pangolin scales from an estimated 2,000 of the critically endangered mammals, the National Parks Board said in a statement on Tuesday.

China’s customs department tipped off Singapore authorities to the illegal cargo, which shipped from the Democratic Republic of Congo destined for Vietnam, the agency said. The containers had been marked to contain timber.

The 8.8 tons of elephant tusks were estimated to have been taken from nearly 300 African elephants. (National Parks Board via AP)

The elephant tusks, the largest seizure of ivory in Singapore, was valued at $12.9 million. The pangolin scales, worth an estimated total of $35.7 million, marked the city-state’s third such seizure this year. Officials have now hauled in 37.5 tons of pangolin scales since April, the agency said.

The pangolin, which resembles a scaly anteater, is said to be the most widely trafficked mammal in the world. Its scales are made of keratin and are used in traditional medicines. They are also believed to possess magical qualities that nullify witchcraft and evil spirits, according to the African Wildlife Foundation.

The African elephant is listed as a vulnerable species. The growing demand for ivory has led to a surge in poaching and threatens their recovery, according to the World Wildlife Fund.

Authorities seized 237 bags of pangolin scales estimated to have been harvested from 2,000 of the critically endangered mammals. (National Parks Board via AP)

The confiscated elephant ivory and pangolin scales will be destroyed to keep them from being put on the market, the agency said.

Singapore’s Endangered Species Act states it is illegal to import, export and re-export wildlife without a permit. Offenders can face a maximum S$500,000 fine and/or two years in prison.