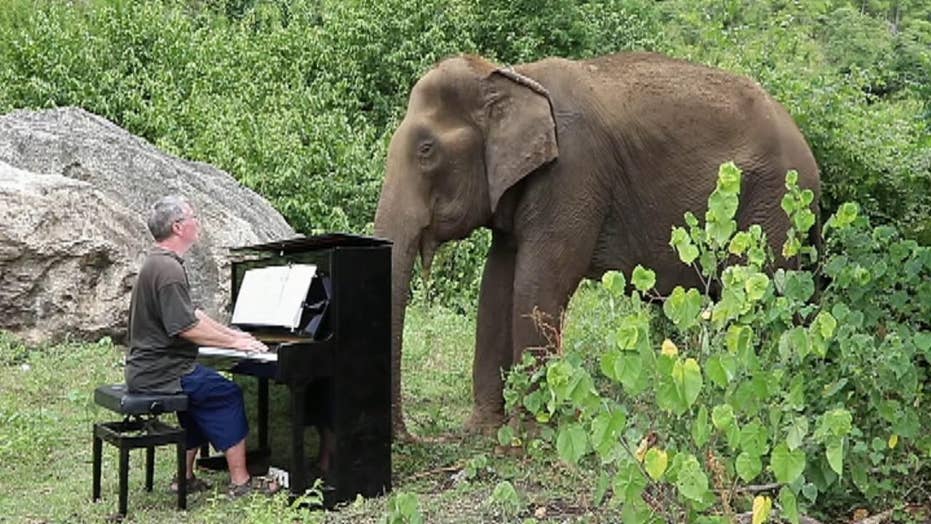 Paul Barton is a classical pianist who plays for old and ailing elephants at Elephants World sanctuary in Thailand.

An English artist and classical pianist is comforting blind and elderly elephants by playing the piano for them at a sanctuary in Thailand.

Paul Barton, born in Yorkshire and now based in the Asian country, performs at Elephants World, the sanctuary his wife founded just outside of Kanchanaburi, for the gentle giants.

In videos posted to his Facebook and YouTube pages, Barton plays classical tunes to the elephants, who appear to be captivated by the sounds — and by Barton himself.

Barton, according to CBS News, said in a video that he and his wife "liked the sound of the place being a retirement center for old, injured and handicapped former logging and trekking elephants."

"So we paid them a visit. I wondered if these old rescue elephants might like to listen to some slow classical music," Barton said.

The pianist said that the first time he played music for the elephants, one of them, who was eating breakfast, stopped when he heard Beethoven.

"[He] was often in pain," Barton said of the elephant. "I like to think maybe the soothing the music gave him some comfort in the darkness."

And the elephants — of which there are around 30 at the sanctuary, according to its website — aren't Barton's only fans. With more than 185,000 subscribers on YouTube and hundreds of "likes" and "shares" on Facebook from his more than 14,000 followers, eager listeners often thank Barton online.

"Thank you for bringing these special moments to these precious souls," one user wrote on Facebook. Another follower commented: "She may not like people, I get that, but she obviously finds the music relaxing. Beautiful!"