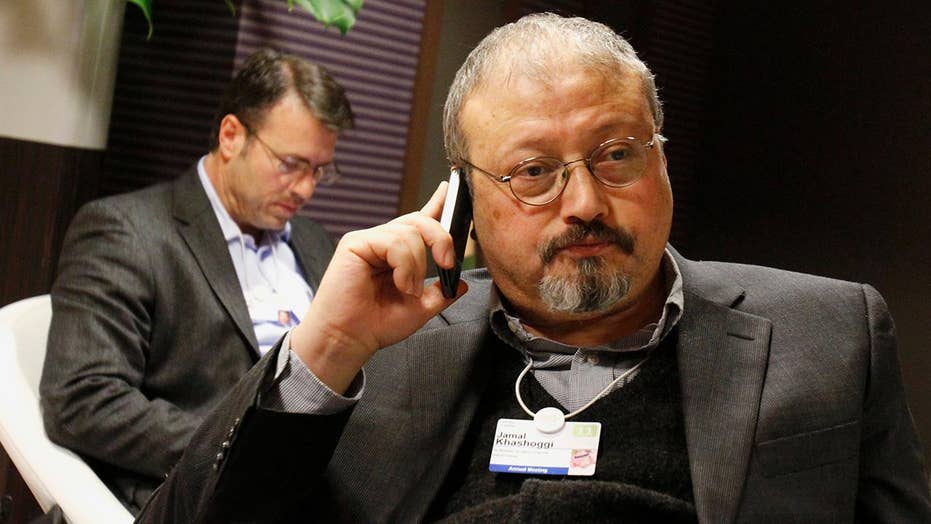 The contrast with pipe bomb attacks.

Saudi Arabia’s attorney general is scheduled to touch down in Turkey on Sunday to further discuss the ongoing investigation into the murder of Jamal Khashoggi, a Saudi writer and a staunch critic of the royal family, in the Kingdom’s Istanbul consulate on October 2.

Although Saudi officials are yet to formally announce the visit of their top prosecutor, Saud al-Mojeb, it comes just days after CIA Director Gina Haspel met with investigators to review evidence and alleged audio tapes of the killing.

So where to from here?

“There is the matter of the whereabouts of the body or remains of Jamal Khashoggi, which the Saudis have to produce. Thus far, we don’t have an official narrative of how Khashoggi was killed,” Kamran Bokhari, a specialist on the geopolitics of the Middle East with the University of Ottawa's Professional Development Institute, told Fox News. “The body or remains will shed considerable light on what really happened in the consulate after Khashoggi walked in. The Saudis know what happened and the issue is when will they disclose?”

Unraveling like a horror movie, Turkish investigators have – from the beginning – dispelled the ever-changing Saudi narratives which initially asserted that Khashoggi walked out of the consulate alive to claims it was an interrogation gone wrong to finally admitting to the murder. Turkish authorities have instead leaked a steady stream of horrific findings of Khashoggi’s torture and eventual death, and have pointed a finger at the highest levels of Saudi leadership as being behind the allegedly “pre-meditated” murder, of which the Saudis are accused of sending a 15-person “hit squad” to do the dirty work.

Saudi Arabia says it has arrested 18 people in connection to the murder -- the 15 alleged culprits and three consulate employees. Turkish President Recep Tayyip Erdogan has demanded those suspects be extradited to stand trial in Turkey and has claimed they have further “information and evidence” regarding the death, and that they will at some point reveal that information.

Ankara’s extradition request for suspects in the killing of Khashoggi was yet another Turkish move to increase pressure on Riyadh. Saudi foreign minister’s immediate rejection of the extradition request shows that the bilateral spat will continue to escalate.

“The dismal state of the rule of law and due process in Turkey weakens the legitimacy of Ankara’s extradition request,” contended Aykan Erdemir, a senior fellow at the Foundation for the Defense of Democracies and former member of the Turkish parliament. “Cases of slain Turkish journalists have remained open for long periods, exacerbating the country’s culture of impunity.”

AFTER BRUNSON RELEASE, SPOTLIGHT TURNS TO NASA SCIENTIST, OTHER AMERICANS JAILED IN TURKEY

But for the United States, it presents a deep schism in diplomacy and how to aptly respond should it be firmly evidenced that Saudi top brass were behind the murder of one of their own citizens living in self-imposed exile.

German officials have already spoken out, with refusals to export arms to Saudi Arabia until Khashoggi’s killing has been adequately examined, and Canada, too, has expressed a willingness to freeze arms export permits to the country.

Secretary of State Mike Pompeo visited Riyadh in the immediate aftermath of revelations Khashoggi was dead, but himself has denied listening to or viewing transcripts of the alleged tapes that his former CIA colleague Haspel heard during her Istanbul stop last week. Furthermore, State Department spokesperson Heather Nauert and Turkey’s Foreign Minister Mevlut Cavusolgu rebuffed any assertion that U.S. officials were given the recordings or transcripts of the incriminating tapes.

According to U.S. intelligence insiders, it is “true statecraft” of trying to manage moving parts and relationships.

“The president sent the Director of the CIA to listen to the tape that Turkey has, but the secretary of state purposely did not listen to the tape. Why? Because the secretary of state would be almost obliged to make a statement on it, whereas no one expects the CIA director to say anything,” explained one source. “That says a lot – deals will be cut, concessions made and perfunctory investigations and punishment conducted in the kingdom. And it won’t be simple, because the Turks hold all the cards.”

Thus, as the source emphasized, any deals or concessions inked between Washington and Riyadh, which falls out of favor with Ankara’s liking, or if anything is said that the Turks subsequently don’t like, “they release the tape and all hell breaks loose.”

“One of the assurances would have most likely been that the Turks keep absolute positive control of that tape,” added the source, likening it to a “global blackmail” of sorts.

While Turkish authorities profess that those closest to Saudi’s Crown Prince Mohamed bin Salman were directly involved in the murder, the Saudi government has sharply rebuked having anything to do with Khashoggi's death. Indeed, the matter also spotlights a broader battle for hegemony between the two Middle Eastern countries, both of which aspire to be perceived as natural leaders of the international Muslim community.

Turkish President Recep Tayyip Erdogan, right, and Diyanet President Ali Eras cover their faces during a prayer on occasion of the opening of the new mosque in Cologne, Germany, on Saturday, Sept. 29, 2018. (AP Photo/Martin Meissner)

Speaking to international officials and experts at a Manama Dialogue conference in Bahrain on Saturday, U.S. Defense Secretary James Mattis cautioned that Khashoggi’s killing “undermines regional stability," but stopped short of directly naming Saudi Arabia’s role or addressing calls from members of Congress to halt arms sales or impose sanctions on the Kingdom.

Saudi Foreign Minister Adel Jubeir addressed the room directly after Mattis, noting that “unfortunately, there has been this hysteria in the media about Saudi Arabia’s guilt before the investigation is completed.”

How it all will play out, is a deepening diplomatic mystery.

“The Turks will continue to leverage the mantra of justice to try and extract as much geopolitical mileage as possible in terms of strategically subordinating the Kingdom. Meanwhile, the Saudis have to make sure that whatever disclosures they make do not undermine the crown prince’s already faltering position,” added Bokhari. “The United States has the difficult job of making sure that the Saudis do not get away with murder while not applying too much pressure that destabilizes the monarchy. Washington should make use of this tragedy to nudge the Kingdom toward enacting some political reforms.”