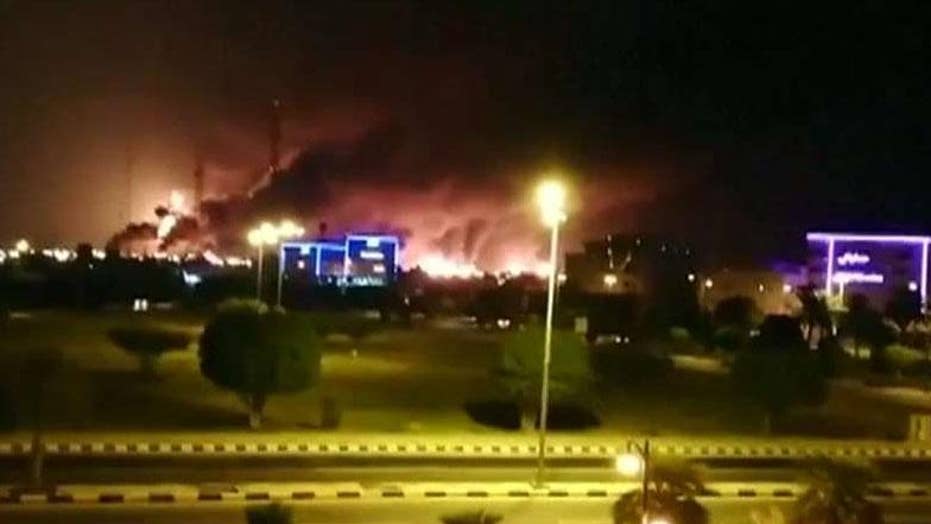 President Trump says the U.S. is 'locked and loaded' against the attackers of a key Saudi oil facility 'depending on verification'; Mark Meredith reports.

"I want to reiterate that the United States wholeheartedly condemns Iran's attack on the Kingdom of Saudi Arabia and we call on other nations to do the same," Perry told reporters.  “This behavior is unacceptable. It is unacceptable and they must be held responsible."

U.S. satellite imagery shows about 17 points of impact on key infrastructure. (US Official)

ABC was first to report that Iran launched the weapons used in the attack.

It wasn't immediately clear the extent of the damage from the drone attack. (US Official)

"Iran has now launched an unprecedented attack on the world’s energy supply," Secretary of State Mike Pompeo said, in part, on Twitter. "There is no evidence the attacks came from Yemen."

U.S. officials told Fox News previous attacks from the Iranian-backed Houthi rebels in Yemen only involved one or two drones at most and targeted southern Saudi Arabia. The attacks Saturday, however, hit facilities near the Persian Gulf not far from Iran, which denied responsibility.

But President Trump on Monday referred back to a previous Iranian lie to cast doubt on the Islamic Republic's official denial.

"Remember when Iran shot down a drone, saying knowingly that it was in their 'airspace' when, in fact, it was nowhere close. They stuck strongly to that story knowing that it was a very big lie. Now they say that they had nothing to do with the attack on Saudi Arabia. We’ll see?" Trump tweeted.

On Sunday night, the president said U.S. forces were "locked and loaded," most likely referring to U.S. warships armed with dozens of Tomahawk cruise missiles in the region, which were also ready to launch in June after the U.S. drone Trump referred to in his tweet was shot down. The president called off the strike at the last minute.

On Monday, Iran said a meeting between Iranian President Hassan Rouhani and President Trump on the sidelines of the U.N. General Assembly later this month is not on the agenda. Foreign Ministry spokesman Abbas Mousavi said that "this meeting will not happen" and called reports about a potential face-to-face as mere "speculation."

However, the U.S. has said it will remain open for talks with Iran. Trump tweeted Sunday: The Fake News is saying that I am willing to meet with Iran, "No Conditions." That is an incorrect statement (as usual!)"

In a trilateral meeting on Monday with Russian President Vladimir Putin and Turkish President Recep Tayyip Erdogan, Rouhani called for Syrian's territorial integrity and sovereignty to be preserved, adding that U.S. troops have an "unlawful presence" in the country.

“The US illegitimate presence on Syrian territories poses threat to Syria’s unity and sovereignty," he said, adding that it's necessary for U.S. troops to leave the region that Syria's sovereignty "can be restored."

The attack in Saudi Arabia came less than a week after former national security adviser and longtime Iran hawk John Bolton’s departure from the White House.