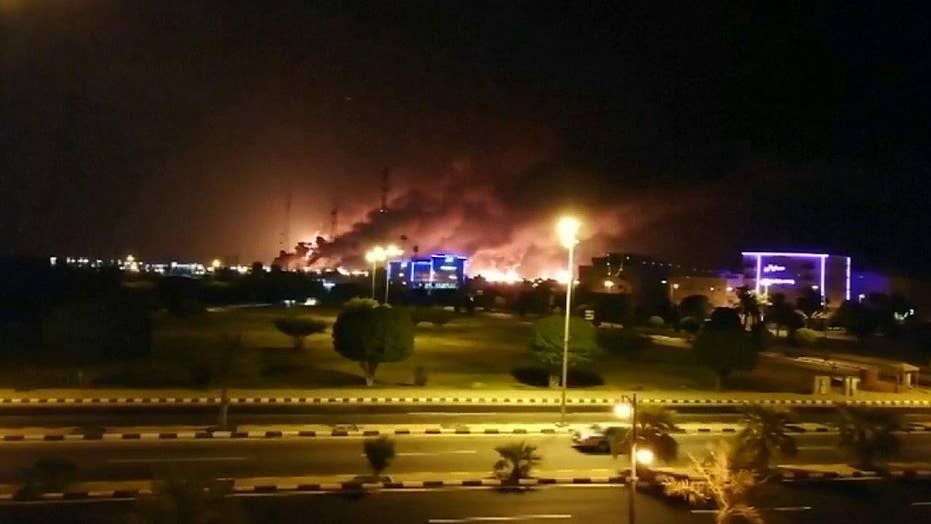 Saudi authorities attempt to control a fire at an Aramco factory.

The Interior Ministry was quoted by state-run media as saying the fires at the Abqaiq oil processing facility in Buqyaq and the nearby Khurais oil field operated by Saudi Aramco were “targeted by drones.”

It wasn’t immediately clear if there were any injuries.

Smoke is seen following a fire at Aramco facility in the eastern city of Abqaiq, Saudi Arabia, September 14, 2019.  (Reuters)

Houthi rebels – who are backed by Iran in a yearslong Saudi-led war against them in Yemen – have reportedly claimed responsibility for the attacks and vowed that further attacks could be expected in the future.

The military spokesman Yahia Sarie said in a short address aired by Houthi’s Al-Masirah satellite news channel that the group launched 10 drones in a coordinated attack on the sites.

“The only option for the Saudi government is to stop attacking us,” he added.

The smoke could be seen from space.

Saudi officials have not commented on who they think is behind the attacks. Saudi Aramco did not immediately respond to questions from the AP.

Meanwhile, The Wall Street Journal reported that the government is shutting down half of its oil output after the drone strikes, which amounts to a loss of about five million barrels a day - or roughly 5 percent of the world's daily production of crude oil. Sources said Saudi Aramco held an emergency board meeting on Saturday to manage the unfolding crisis.

The oil facility processes sour crude oil into sweet crude, then later transports onto transshipment points on the Persian Gulf and the Red Sea. Estimates suggest it can process up to 7 million barrels of crude oil a day.

The plant has been targeted in the past by militants. Al Qaeda claimed suicide bombers tried but failed to attack the oil complex in February 2006.

The U.S. Embassy in Riyadh said it was unaware of any injuries to Americans. Saudi Aramco employs a number of U.S. citizens, some of whom live in guarded compounds in the kingdom near the site.

President Donald Trump called Saudi Arabia's Crown Prince Mohammed bin Salman in the wake of the drone strikes and expressed the United States' readiness to cooperate with the kingdom in supporting its security and stability, according to a news release from the Saudi Embassy in Washington. Trump said recent attacks against Saudi state-run oil facilities have had a negative impact on the U.S. and global economies.

"These attacks against critical infrastructure endanger civilians, are unacceptable, and sooner or later will result in innocent lives being lost," U.S. Ambassador John Abizaid, a former Army general, said.

The Saudi-led coalition has been battling the rebels since March 2015. The Iranian-backed Houthis hold Yemen's capital, Sanaa, and other territory in the Arab world's poorest country.

The war has become the world's worst humanitarian crisis. The violence has pushed Yemen to the brink of famine and killed more than 90,000 people since 2015, according to the U.S.-based Armed Conflict Location & Event Data Project, or ACLED, which tracks the conflict.