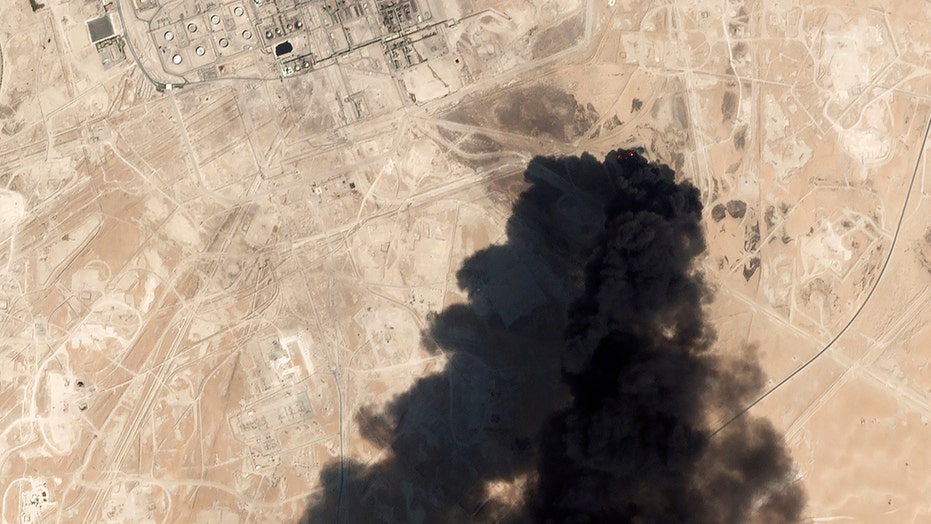 Hudson Institute senior fellow Michael Pregent says he believes without a doubt that Iran was involved in the attacks on Saudi oil facilities.

U.S. satellite images appeared to show approximately 17 points of impact on key infrastructure at the site after the attack.

U.S. satellite imagery showing about 17 points of impact on key infrastructure. (US official)

While Yemen’s Iran-backed Houthi rebels have since claimed responsibility for the attack, the U.S. has accused Iran of launching the assault. Tehran has denied the allegations, calling the claims "maximum lies."

Houthi leader Muhammad al-Bukhaiti reiterated his group's claim of responsibility, telling The Associated Press on Sunday it exploited "vulnerabilities" in Saudi air defenses to strike the targets. He did not elaborate.

The exact extent of the damage from the drone attack wasn't immediately clear. (US official)

Other images appeared to show black char marks and thick black smoke in an area of the facility.

The Washington-based Center for Strategic and International Studies in August had identified that region as the plant's stabilization area. That zone included "storage tanks and processing and compressor trains — which greatly increases the likelihood of a strike successfully disrupting or destroying its operations," the center wrote at the time.

Neither Saudi Arabia nor the state-run oil giant Saudi Aramco have said how much damage was done to the facility. Saudi Arabia has promised to fill in the cut in production with its reserves but has not said how long it would take to repair the damage.

There was no immediate impact on global oil prices from the attacks as markets were closed for the weekend, but analysts have anticipated a spike in oil prices when markets reopen Monday.

Black char marks at the center of the facility suggested the attack struck at the heart of the processing facility. (European Commission via AP)

Meanwhile, the attack has ratcheted up the already high Mideast tensions amid escalating U.S.-Iran hostilities as the nuclear deal between Tehran and world powers, launched during the Obama administration, has continued to unravel.

"Because of the tension and sensitive situation, our region is like a powder keg," warned Iran National Guard Brig. Gen. Amir Ali Hajizadeh. "When these contacts come too close, when forces come into contact with one another, it is possible a conflict happens because of a misunderstanding."

In recent months there's been a string of mysterious attacks on oil tankers that the U.S. has blamed on Tehran; at least one suspected Israeli strike on Shiite forces in Iraq; and Iran shooting down a U.S. military surveillance drone.