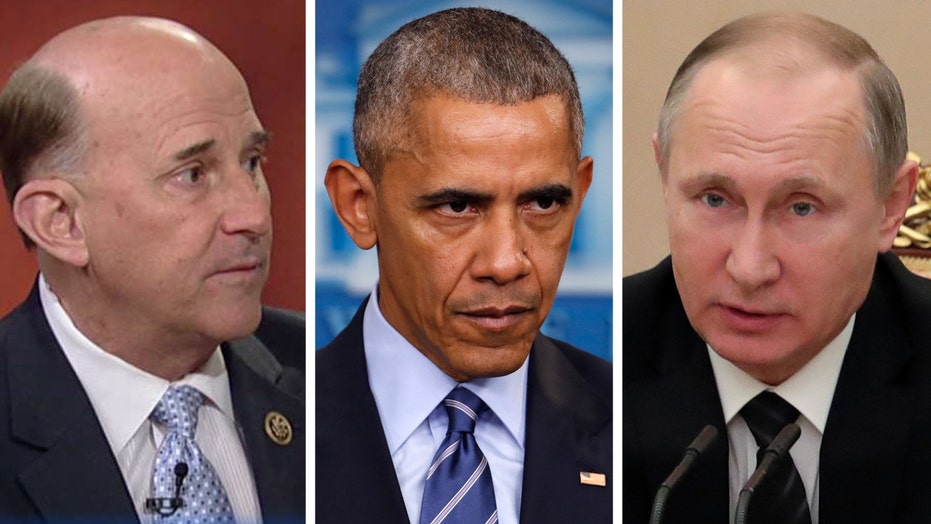 The Russian government unleashed a series of threats to retaliate Friday after President Barack Obama approved a series of punishing new sanctions against Moscow in connection to election-related hacking, kicking 35 intelligence operatives out of the U.S.

TRUMP RESPONDS TO SANCTIONS AGAINST RUSSIA, SAYS IT'S TIME TO 'MOVE ON'

Russia's foreign minister said his country could bar American diplomats from using their summer retreat on the outskirts of Moscow and a warehouse south of Moscow.

Sergey Lavrov also revealed that his Foreign Ministry and other agencies suggested that President Vladimir Putin order the expulsion of 31 employees of the U.S. Embassy in Moscow and four from the U.S. Consulate in St. Petersburg. However, Putin said later Friday that wouldn't happen.

OPINION: SANCTIONS PUSH AGAINST RUSSIA A GOOD MOVE THAT COMES TOO LATE

"We will not create problems for American diplomats. We will not expel anyone," Putin told reporters. He said he would wait to see how President-elect Donald Trump acts once he takes office, Sky News reported.

The threats came after Obama on Thursday imposed sanctions on Russian officials and intelligence services over alleged Russian interference in the U.S. presidential election, as American political sites and email accounts were hacked. The government ordered 35 Russian diplomats to leave the U.S. in 72 hours, and closed two facilities the Russians were using.

Russia has continued to deny accusations by the U.S. that it hacked and stole emails in order to help Trump win. Trump commented on the matter via Twitter, saying the U.S. should move on. He also said he planned on meeting with U.S. intelligence leaders next week to learn more.

The spokesman added that Putin would order “appropriate” retaliation for the sanctions.

"We think that such steps by a U.S. administration that has three weeks left to work are aimed at two things: to further harm Russian-American ties, which are at a low point as it is, as well as, obviously, to deal a blow to the foreign policy plans of the incoming administration of the president-elect," Peskov said.

Medvedev, who focused on improving U.S.-Russia ties when he was president from 2008 to 2012, called the latest diplomatic breach "sad" in a Twitter post.

Thursday’s sanctions were the strongest action the Obama administration has taken to date to retaliate for a cyberattack, and more comprehensive than last year's sanctions on North Korea after it hacked Sony Pictures Entertainment. The new penalties add to existing U.S. sanctions over Russia's actions in Ukraine, which have impaired Russia's economy but had limited impact on Putin's behavior.

U.S. relations with Russia have suffered during Obama's years in office as he and Putin tussled over Ukraine, NSA leaker Edward Snowden and Russia's support for Syrian President Bashar al-Assad. Maria Zakharova, a Russian foreign ministry spokeswoman, took to Facebook to call the Obama administration "a group of foreign policy losers, angry and ignorant."

It was unlikely the new sanctions, while symbolically significant, would have a major impact on Russian spy operations. The sanctions freeze any U.S. assets and block Americans from doing business with them. But Russian law bars the spy agencies from having assets in the U.S., and any activities they undertake probably are covert and hard to identify.

"On its face, this is more than a slap on the wrists, but hardly an appropriate response to an unprecedented attack on our electoral system," said Stewart Baker, a cybersecurity lawyer and former National Security Agency and Department of Homeland Security official.