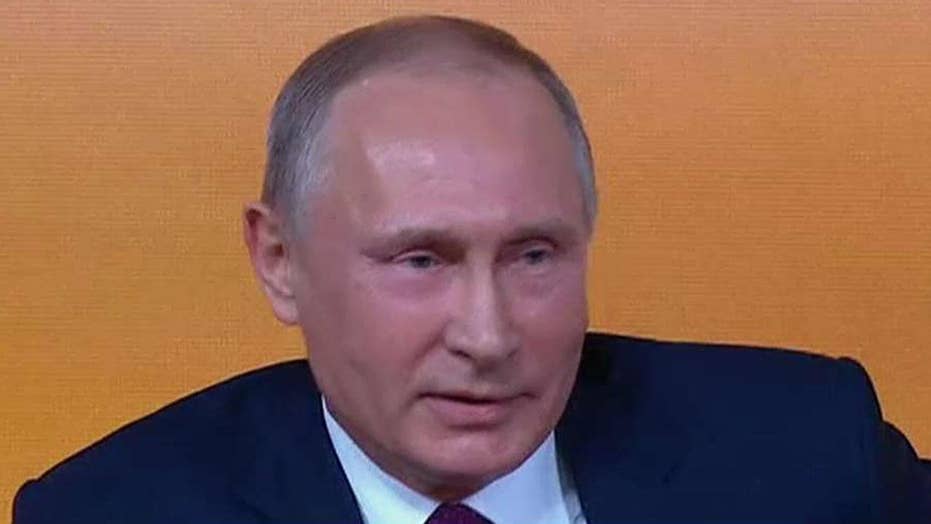 MOSCOW – As far as year-end Presidential news conferences go, this one was middling.

The longest annual news conference this Russian President has held was in February of 2007.  That one ran four hours and forty minutes.

The record number of questions asked was set in 2006. Then Putin answered a whopping 140 questions from the accredited audience.

The annual presidential news conference in Russia is an experience like no other.

Pulling up to the World Trade Center on the bank of the Moscow River, while it is still semi-dark outside, I am greeted by men in camouflage pants running security. They don’t let my taxi pull right up to the venue, saying the rules had changed in Thursday’s “event.” As if it was some sort of show. My driver chuckled.

“Event,” he repeated, curiously, as if there was some great mystery.

At about 9 a.m., the place is buzzing with activity. A generous breakfast is laid out for the 1,600 plus journalists in attendance. Once seated two hours later, they will be hostages, largely not allowed to move until the president has said his bit and has left the hall—probably sometime after 4. So, the press eats up, filling themselves with delicious Russian meat pies and sandwiches that showcase a vast array of kielbasa, or local salami.

A Russian journalist approaches me as I am sipping a cup of coffee and doesn’t waste time asking what I think of President Trump. I tell him that is not really a polite question to ask a stranger. And, in return, I play by my own rules, not asking him what he thinks of Putin. A TV screen runs a countdown to the presser. Journalists, trying to busy themselves, interview each other.

The conference gets going at noon, with Putin seated at a desk. He’s flanked by his spokesman, Dmitry Peskov, who is at a podium fielding questions.

Putin, running for re-election next year, kept a largely a domestic focus in Thursday’s conference. Nipping at the heels of the record of another famous Kremlin occupant, Joseph Stalin, Putin will likely run in Russia until 2024. He took over the presidency from Boris Yeltsin on the eve of the millennium. There was a switch-out with Dmitry Medvedev in 2008. For four years, Putin wore the hat of prime minister, a legal loophole that allowed him to return to the big seat in 2012, though few doubt he was ever second in command. Not for a moment.

The consensus seems to be that while evincing optimism about the path Russia is on, Putin didn’t bowl anyone over with a tangible vision for his next term. He spoke in platitudes about beefing up infrastructure and technological prowess across the country.

He got passionate about increasing aid to families with children and reversing ecological decline in the Far East. Putin seemed proud of his mastery of facts and figures, relishing ticking off a dizzying number of statistics, on agricultural production and growth and the improvements in life expectancy.

The way to attract attention in order to ask a question at the news conference is to wave a sign. There is signage protocol. Placards can’t be larger than A-3 size, though I am not even sure what that means. It is announced in advance and several times on a loudspeaker before the conference begins. Signs can scream whatever they want—affiliation, area of interest, feelings about life or Putin himself.

A harried-looking man seated near me in a neutral suit and vivid purple shirt is assembling his sign moments before cameras roll. He has a small tree branch to hold it up and binds his placard nervously with fat cellophane strips that make loud sucking sounds as they take hold. I ask him what he hopes to ask. Fish in the arctic, he says, but adds—it is too complicated to explain.

He does get his question in—at the end of his long ranting monologue about the high price of fish and other fishing-related issues. Putin seems transfixed. In the end, the man shouts, “I actually tricked you! I slipped into this conference. I am not a journalist. I work in the fishing industry.”

Putin smiles at the man’s ingenuity and earnestness and says he will look into the prohibitive price of fish.

The one opposition leader allowed to run in next year’s election, Ksenia Sobchak, is then called on. Putin, with a glint in his eye, asks her if she is tricking him, too. She replies that she is in fact still a journalist and since he doesn’t do debates, this may be her only opportunity to take him on.

Sobchak asks why the opposition has such a hard time in Russia, and has to fear arrest or even death. Putin largely brushes off her question, saying that true opposition needs ideas and plans—not just loud slogans, and criticism of the regime. He says the Russian people don’t want what has happened in Kiev to happen in their cities.

Someone asks him how he would evaluate President Trump’s first year in office.

The Russian president doesn’t really want to be drawn in, but gives kudos to his American counterpart for the performance of the markets since Trump took office.

“I shouldn’t assess the work of President Trump. This has to be done by his electorate, the American people. We see some serious achievements… Look how the markets went up,” he said. “This says there is trust from investors in the American economy.”

But he doesn’t seem to want to talk much about America, brushing off the allegations of collusion between the Trump camp and Russia as the work of Trump detractors who want to keep him from doing his job.

He does take a swipe at the inherent contradictions in U.S. policy toward Russia.

Putin said, with sarcasm: “Did you notice that your Congressmen, Senators, look very good, wear nice suits and shirts? They seem to be smart people. But they put us in one row with North Korea and Iran and at the same time push the president to persuade us to deal with the North Korean problems and the Iranian nuclear program together. Are you normal people?”

And then Putin quickly got back to the business of running his own country.

The crowd remained rapt throughout the three hours and 42 minutes. But Russia’s main opposition leader, Alexei Navalny, barred from running in the election, had this searing assessment.

“Of all the press conferences, this was the least interesting, the least convincing,” he said. “Basically, nothing was said.”