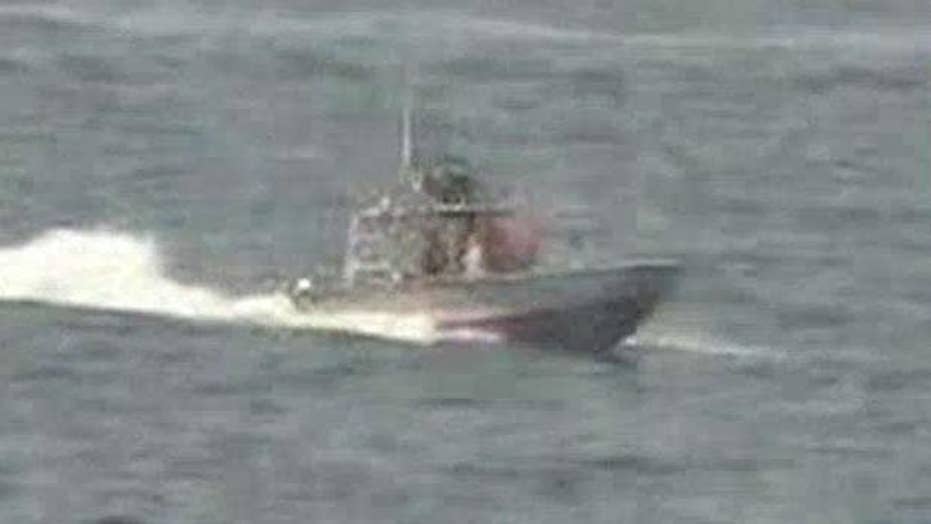 Iran escalates harassment of US Navy ships in Persian Gulf

Is country training for war?

Unsafe interactions at sea between the U.S. and Iran are on a troubling upswing, the commander of an American destroyer that recently fired warning shots said on Thursday.

SENATORS CORNYN, RUBIO, YOUNG: IT'S TIME FOR ACTION AGAINST IRAN

Cmdr. Mark Davis, the USS Mahan's commanding officer, said the number of "unsafe and unprofessional" interactions jumped from 23 in 2015 to 35 last year, although the percentage of such incidents slipped slightly.

"We tend to abide by the international rules of the sea and also the international norms and laws. And part of that is: if you're closing a vessel that you're supposed to, you know, establish communication, let them know what your intentions are and then you come to an agreement as to how you're going to pass so that it's not unsafe and does not make people nervous," Davis told The Associated Press.

Fox News reported over the summer when four of those unsafe interactions unfolded in just one week. Last month, the USS Mahan fired warning shots after four high-speed Iran Revolutionary Guard Navy patrol boats approached it at the entrance to the Persian Gulf and ignored multiple warnings.

The destroyer fired three shots in all using .50-calibre machine guns. Davis said they were within their right to act, as all boats should "abide by the international rules of the sea and also the international norms and laws."

In 2015 there were 23 unsafe and unprofessional interactions out of the 327 that occurred with the Iranian Navy. In 2016, he said, the number increased to 35 out of 527, according to Davis.

So far in 2017 the USS Mahan has had eight interactions with the Iranians, of which the last was unsafe, the commander said.