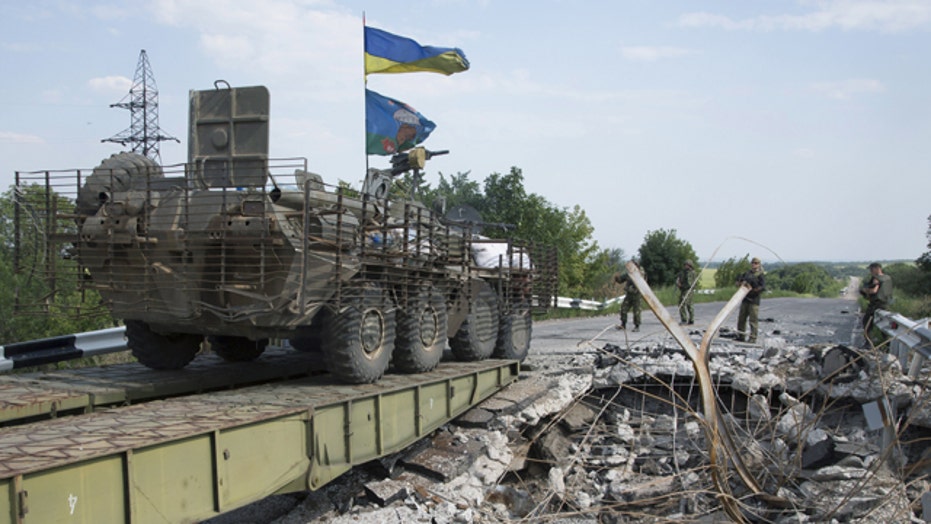 Critics call for West to ramp up pressure on Russia

HRABOVE, Ukraine – With the sound of artillery fire in the distance, dozens of international investigators arrived Friday at the zone where a Malaysia Airlines plane crashed in eastern Ukraine and began preparations to comb the rural area for remains of as many as 80 victims and jet debris.

Several hours before they arrived, at least 10 Ukrainian soldiers were killed when their convoy was ambushed by pro-Russian separatist rebels in a town close to the wreckage site. Thirteen more soldiers were unaccounted for after the attack, officials said, and the bodies of four more people were being examined to determine whether they were soldiers or rebels.

The investigators from the Netherlands and Australia plus officials with the Organization for Security and Cooperation in Europe traveled from the rebel-held city of Donetsk in 15 cars and a bus to the crash site outside the village of Hrabove. Then they started setting up a base to work from at a chicken farm.

As the investigators prepared equipment for the search, an Associated Press reporter heard the artillery fire.

The investigative team's top priority is to recover human remains that have been rotting in midsummer heat of 90 degrees since the plane went down on July 17. They will also try to retrieve the belongings of the 298 people killed who were aboard the Boeing 777.

Ukraine and the West contend the plane was shot down by the rebels with a Russian-supplied missile. Rebel leaders publicly deny it, but one top rebel official has told the AP on condition of anonymity that insurgents were involved in the operation that downed the plane.

Friday's search effort came after a smaller advance investigative team managed to perform a preliminary survey of the area a day earlier. For days, clashes along routes to the wreckage site had kept investigators from reaching the site. Independent observers warned that there has been tampering with evidence.

The sprawling site of fields in between two villages will now be officially designated a crime scene and divided into grids that will be systematically searched for remains, victims' belongings and jet crash evidence, Australian police officer Brian McDonald told reporters in Hrabove. Specially trained dogs will be also be used in the search.

The investigative team's journey in their convoy lasted about three hours from Donetsk, through the government-held town of Debaltseve, and back into the separatist-controlled territory, where the wreckage lies. At Debaltseve, the convoy was joined by three vehicles from the International Committee of the Red Cross.

Both sides in the conflict tentatively agreed to a cease-fire around the crash zone, but the Friday morning attack by rebels on government troops took place less than 12 miles south of the crash site, outside the town of Shakhtarsk. Ukrainian forces and rebels have been battling in that area for several days but the town is still in rebel hands.

Defense officials said that an army convoy was struck by mortars during redeployment.

Ukraine security spokesman Vladislav Seleznev said the attack took place at 6 a.m., before the end of the 24-hour "day of quiet" declared Thursday in response to a call for a cease-fire from U.N. Secretary General Ban Ki-moon.

"The militants are behaving in a cowardly and shameless fashion," Seleznev said. "They used the `day of quiet' just to fire on us."

Another Ukraine defense spokesman, Andriy Lysenko, said another 13 soldiers have been reported missing in action after the attack.

Seleznev said the bodies of another four people killed in the incident have not yet been identified.

Ukrainian forces in attempting to regain control of the area are trying to drive a wedge into an area between the largest rebel-controlled cities, Donetsk and Luhansk. Shakhtarsk lies on one of two highways linking those cities.

In Donetsk, meanwhile, one person was killed Friday and three others were wounded when mortar fire struck a minibus carrying passengers near the central train station, said city hall spokesman Maxim Rovensky.

The city government in Luhansk said five residents were killed and nine wounded after artillery shells rained down on them.

Officials in the two cities did not say who they believe was responsible for the shelling.