A new group of Central American migrants bound for the U.S border, wading across the Suchiate River, that connects Guatemala and Mexico, in Tecun Uman, Guatemala. (AP Photo/Santiago Billy)

Hundreds of Central American migrants crossed a river from Guatemala into Mexico on Monday, defying a heavy federal police presence while following in the footsteps of a thousands-strong caravan making its way toward the U.S. border.

A low-flying police helicopter hovered overhead as the migrants waded in large groups through the Suchiate River’s murky waters, apparently trying to use the downdraft from its rotors to discourage them. Guatemala’s Noti7 channel reported that one man drowned and aired video of a man dragging a seemingly lifeless body from the river.

Once on the Mexican side the migrants were surrounded and escorted by officers as sirens wailed.

The standoff at the riverbank followed a more violent confrontation that occurred on the bridge over the river Sunday night, when migrants threw rocks and used sticks against Mexico police. One migrant died from a head wound during the clash, but the cause was unclear. 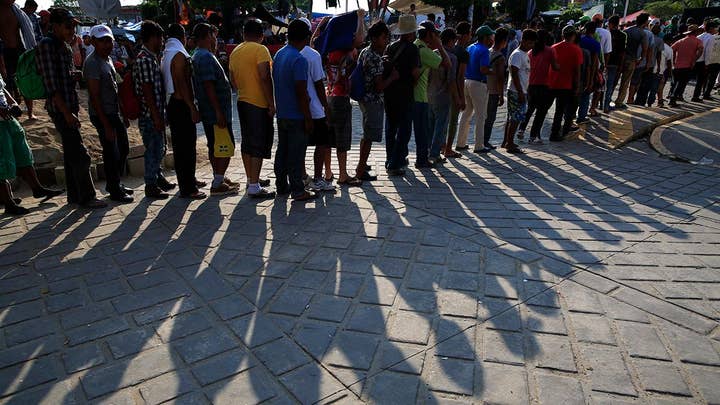 The second group was smaller than the first caravan. In the Mexican border town of Ciudad Hidalgo, they said they hoped to continue onward early Tuesday morning.

Also in southern Mexico, the original caravan resumed its advance, still at least 1,000 miles or farther from their goal of reaching the United States, as Fox News previously reported, as the Pentagon announced it would send some 5,200 active-duty troops to “harden” the U.S.-Mexico border.

The troop deployment, first reported by The Wall Street Journal, had been expected after Defense Secretary Jim Mattis approved the request last week. However, the number of troops is far higher than initial estimates.

A migrant raised his fist as he neared the Mexican side of the Suchiate River, that connects Guatemala and Mexico. (AP Photo/Santiago Billy)

Earlier in the day, members of the smaller caravan strung out along the highway outside the city of Tapanatepec, some waiting for rides while others plodded toward their goal for the day: Niltepec, about 34 road miles to the northwest. Federal Police patrols drove slowly alongside encouraging them to stay on the shoulder.

Victor Argueta, 54, of Santa Barbara, Honduras, said he and his wife had spent two nights sleeping on the international bridge between Tecun Uman, Guatemala, and Ciudad Hidalgo, Mexico, before eventually crossing the river on a raft.

Migrants climbing on a truck to ride on the road that connects Tatanatepec with Niltepec, Mexico. (AP Photo/Rodrigo Abd)

“We came with the goal of wanting to improve our future for ourselves and for our family. We did not come with the intention of finding death on the road,” Argueta said, reflecting on the news of the Honduran man’s death the previous night. “Maybe that boy came with good intentions, perhaps with a young person’s idea of supporting his family.”

While catching rides from passing trucks was a largely impromptu affair in the first week of the caravan, it has now become more organized. On Monday, more than 100 migrants lined up at a gas station parking lot to wait for rides.

Mayor Ramiro Nolasco of the town of Zanatepec said locals had organized a bus and several trucks to carry migrants, mainly women and children.

“We are helping our brothers from other countries with food, water, and transportation,” Nolasco said. “It is going to be very little, compared to what they need.”

At a checkpoint near the town, some migrants gathered to ask for help returning home to Honduras, the origin of the great majority of those in the caravan. Exhausted from many days on the road, and disheartened by the many miles yet to go and misbehavior by some fellow travelers, people have been dropping out from the caravan, which at its peak was estimated at more than 7,000.

The generosity shown by small towns and residents when the migrants first started trekking through southern Mexico has lessened as well. At the last stop, few people came out to offer food, clothes and other items, said Hasiel Isamar Hernandez, a 28-year-old Honduran mother of three who has been with the caravan since it started in her hometown of San Pedro Sula.

“Of the friends that I have been with, all want to go back,” Hernandez said, adding that many had blistered feet. For her, the last straw was when her husband told her that her 3-year-old daughter back home had stopped eating because she missed her mother.

The second group back at the Guatemalan frontier has been more unruly than the first that crossed. Guatemala’s Interior Ministry said Guatemalan police officers were injured when the migrant group broke through border barriers on Guatemala’s side of the bridge. 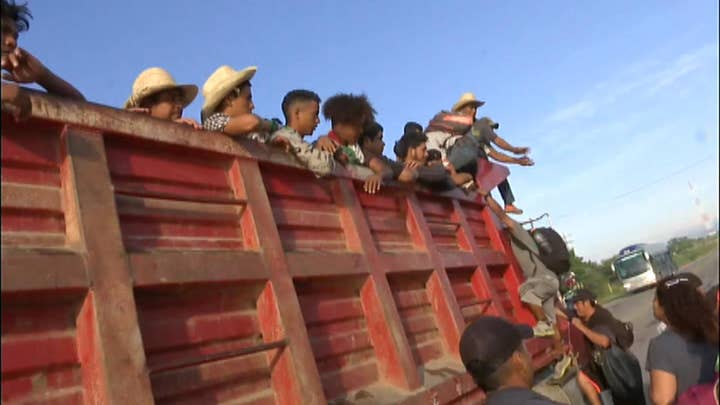 LARGE CARAVAN APPEARS TO BE PICKING UP SPEED

Mexico authorities said migrants attacked its agents with rocks, glass bottles and fireworks when they broke through a gate on the Mexican end but were pushed back, and some allegedly carried guns and firebombs.

On Monday, Mexican Interior Secretary Alfonso Navarrete Prida lamented what he called a second “violent attempt” to storm the border, accusing people of placing the elderly, pregnant women and children at the front, putting them at risk of being crushed.

“Fortunately, that did not happen,” he said.

The governmental National Human Rights Commission opened an investigation into the use of the helicopter at the river, saying it caused “strong winds and waves that put people at risk ... especially girls, boys and women.”

The Interior Department said in a statement that two Hondurans ages 17 and 22 were arrested Monday when one of them tried to shoot at police in the town of Ignacio Zaragoza, near the Hidalgo border crossing. It said the Glock failed to fire, and no agents were injured.

Mexico said the previous day that temporary identity numbers had been issued to more than 300 migrants, which would allow them to stay and work in Mexico. Pregnant women, children and the elderly were among those who joined the program and were now being attended at shelters.

At least 1,895 have applied for refugee status in Mexico, and hundreds of others have accepted assisted returns to their country of origin.