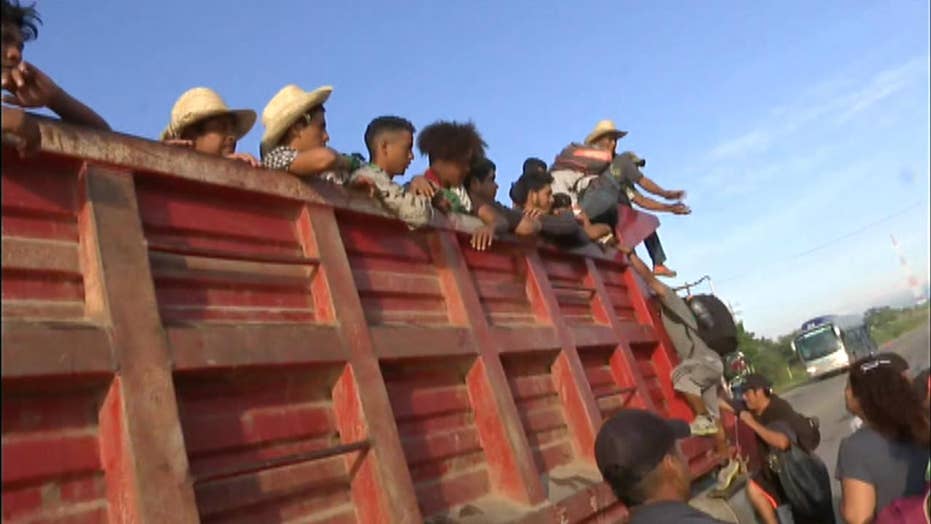 Caravan members line up to hitch a ride northbound on their journey to the U.S. border; Griff Jenkins reports from the scene in Santo Domingo Zanatepec.

Migrants in the leading caravan trying to make its way to the United States appear to be approaching the border at a faster pace now, as the group takes advantage of rides being offered by trucks and other vehicles.

A Fox News crew traveling with the caravan observed a group of migrants in Tepanatepec climbing up the sides of a tall red truck Monday morning after it pulled into an area where the city’s mayor and volunteers were distributing food.

"The trucks come up, and they queue up...this is how they are mostly moving,” Fox News' Griff Jenkins said on-air. “Now, they do walk, but it is very exhausting."

One of the migrants gave a thumbs-up and a smile to a Fox News cameraperson before boarding the truck. The migrants are trying to make their way to Mexico City and then the U.S., despite repeated warnings from President Trump that they will not be allowed across the border.

There are currently three migrant caravans trying to make their way to America. The first caravan, which has included as many as 7,200 people and is currently approximately 1,000 miles from the closest border crossing with the U.S., entered Mexico from Guatemala around Oct. 20.

During its first three days in Mexico, that caravan traveled about 50 miles. Over the past six days though, the pace has picked up, and the group has covered more than 150 miles with the help of free rides given by vehicles and trucks like the one observed this morning.

Migrants wait in lines to receive donated food as others look on in Tapanatepec, Mexico. (AP)

The caravan behind it, which is smaller in size, has been accused of violently attacking Mexican police and immigration agents with rocks and glass bottles along Mexico’s border with Guatemala.

Interior Secretary Alfonso Navarrete Prida made those accusations late Sunday while simultaneously denying his country’s forces were responsible for the death of a 26-year-old Honduran who Guatemalan officials say was struck by a rubber bullet earlier that day.

The death came as several hundred migrants in the town of Tecun Uman – where the leading caravan passed through more than a week ago – broke through border barriers and clashed with Mexican authorities who were determined not to let the caravan grow or be repeated, according to the Associated Press.

Guatemalan firefighters told the AP the Honduran was killed there Sunday by a rubber bullet that hit his head – but as of Monday the source of the bullet was in dispute. The exact circumstances of the death were also unclear.

Prida, in a news conference last night, claimed Mexican federal police and immigration agents were pelted with rocks, glass bottles and fireworks as the migrants broke through a gate on the Mexican side of the border. He added that none of the officers were armed with firearms or anything that could shoot rubber bullets, and further claimed some of the attackers were carrying guns and firebombs.

Central American migrants try to force their way through a customs gate at the border bridge connecting Guatemala and Mexico, in Tecun Uman.

Also on Sunday, about 300 people departed from San Salvador – the capital of El Salvador – forming the third caravan of people hoping to make their way to the U.S., the Associated Press reported.

Most of the migrants in the caravans appear determined to reach the U.S. despite offers of refuge in Mexico.

Mexican President Enrique Pena Nieto launched a program Friday dubbed "You are home," which promises shelter, medical attention, schooling and jobs to Central Americans who agree to stay in the southern Mexico states of Chiapas or Oaxaca, far from the U.S. border.

Mexico's interior minister said Sunday that temporary identity numbers had been issued to more than 300 migrants, which would allow them to stay and work in Mexico. The ministry said pregnant women, children and the elderly were among those who had joined the program and were now being attended at shelters. He added that 1,895 had applied for refugee status in Mexico.