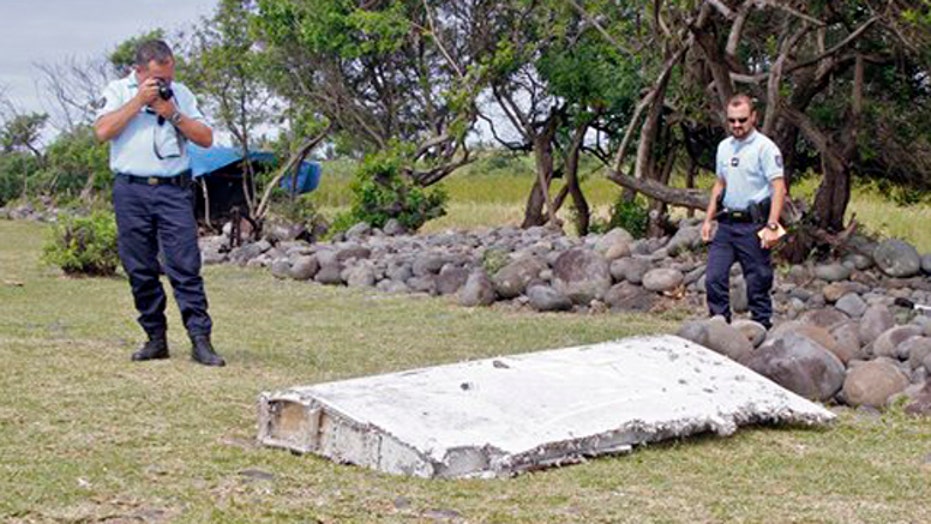 What could MH370 debris reveal about fate of plane?

A Malaysian team has collected other plane debris including a window and some aluminum foil on Reunion Island near where a flaperon was found last week, Malaysia’s transport minister said on Thursday.

However, Liow Tiong Lai says he can’t confirm whether the debris belongs to Flight 370, which vanished on March 8, 2014 with 239 people on board. “I can only ascertain that it’s plane debris.”

Liow told reporters “there are many items collected” from the Indian Ocean island where the wing part was found last week. The part was confirmed on Thursday to be from Flight 370.

Liow said Malaysia has asked authorities in neighboring areas including Mauritius and Madagascar to help comb their beaches for possible debris to widen the search.

The confirmation from Malaysian Prime Miniser Najib Razak that the flaperon was from MH370 has been met with skepticism and anger by relatives of some of the missing passengers, who have waited more than 500 days for concrete clues to the fate of their loved ones.

Dai Shuqin, the sister of one of the passengers, was among about a dozen Chinese relatives who held a demonstration outside Malaysia Airlines' offices in Beijing.

"France is being cautious about it, but Malaysia is desperate to put an end to this case and run away from all responsibilities," she said.

Authorities from France, the U.S. and Australia have stopped short of full confirmation the debris is actually from the missing plane. Liow reaffirmed the prime minister’s comments on Thursday and said differences with other countries amount to “a choice of words.”

"They want to continue with additional tests. We respect their decision," Liow said of the French. "From our first observation, the color tone and all maintenance records that we have, we know. Our records show that it's the same as MH370."

He said there are "many other technical details that I do not have to reveal" but that confirm the part is from Flight 370.

The caution was typical of how France carries out air crash investigations. The French agency that usually handles such probes, known as the BEA, can take months if not years to lay out exhaustive conclusions in reports that last hundreds of pages. During the inquiries, they only rarely offer interim assessments and even more rarely comment.

The Australian government, which leads the underwater search for wreckage west of Australia, was also less certain than Malaysia, saying only that "based on high probability, it is MH370."

Publicly, Australian officials withheld criticism of Najib's announcement, with Australian Transport Minister Warren Truss saying Australia respected Malaysia's right to make that call, given it is the government in charge of the investigation.

"Of course there is still some i's not dotted and t's not crossed. There is still a very small element of doubt," Truss said.

Families of those on board the plane are starting to get fed up with mixed messages.

"Why the hell do you have one confirm and one not?" said Sara Weeks, the sister of New Zealander Paul Weeks, who was on board. "Why not wait and get everybody on the same page so the families don't need to go through this turmoil?"

Ross Tapsell, a Malaysia expert at the Australian National University, said he suspects Najib was trying to distract Malaysians from a corruption scandal. On Monday, Malaysia's anti-corruption agency said that $700 million in Najib's personal bank accounts came from donations, not from a debt-ridden state investment fund.

"He's under so much political pressure at the moment," Tapsell said. "I presume if he can try to move the conversation back to the MH370 stuff, it's in his interests to do so."

Tapsell also said Najib would want to stamp his authority on the search, rather than allow France to dominate the attention through its leading role in examining the wing fragment.

A U.S. official close to the investigation told The Associated Press the flaperon is clearly from a Boeing 777. However, a team of experts in France examining the part hadn't yet been able to find anything linking it specifically to the missing plane, the official said, speaking on condition of anonymity because there was no authorization to talk publicly about the case.

With no other 777s or flaperons known to be missing, it makes sense that the part comes from Flight 370, but the U.S. and Boeing team members are merely trying "to be precise," the official said.

Analysts say investigators will examine the metal with high-powered microscopes to gain insight into what caused the plane to go down. But they warn it won’t fully solve the mystery of why the plane disappeared.

It is not known why Flight 370 — less than an hour into its journey — turned back from its original flight path and headed in an opposite direction before turning left and flying south over the Indian Ocean for hours.

A six-week air and sea search covering 1.8 million square miles of the southern Indian Ocean surface last year failed to find any trace of the jetliner. The Reunion Island debris would support the working theory that the jet went down in the Indian Ocean and the debris was carried by the current.

Malaysian officials have said the plane's movements were consistent with deliberate actions by someone on the plane, suggesting someone in the cockpit intentionally flew the aircraft off course.

Since last year, Australian officials who are leading the search effort have operated on the theory that the plane flew on autopilot for hours before running out of fuel and crashing into the ocean. Investigators settled on that scenario after analyzing data exchanged between the plane and a satellite, which showed the jetliner took a straight path across the ocean.